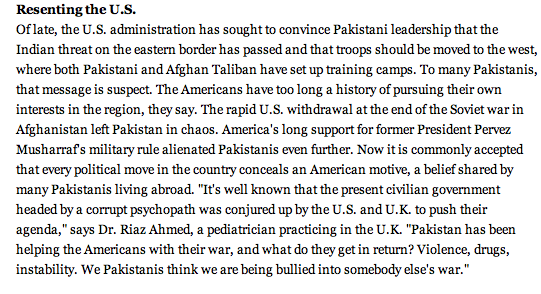 Last week I was randomly reading a piece in Time on Pakistan by Aryn Baker when I skimmed across something strange. In early April, I wrote a story on the Huffington Post critical of further military aid to Pakistan. Subsequently, I received a bizarre crank call from a man claiming to be a Pakistani doctor in London who accused of being either an “Indian spy” or a “Jew” or perhaps both in the pay of the Indian government. When pressed, he told me his name was “Dr. Ahmed” and that he called me (obviously finding my # on Google)in order to intimidate and he was (obviously) furious about what I had written. I’m reading this article  and the tone of this seemingly random quote would seem to be from the same (crazy) source. I’m sure there’s more than one angry, paranoid Dr. Ahmed in Londonistan these days but I think it may be the same paranoid kook.