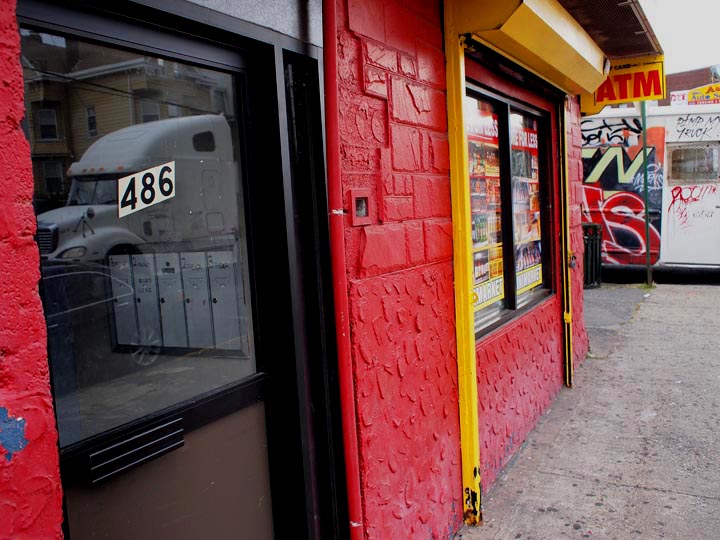 486 Union Avenue on the ramshackle side of the tracks in Paterson, New Jersey. ©2012 Derek Henry Flood

Paterson- New York magazine occasionally runs a segment of their real estate section called “Fame Slept Here” about astronomically priced homes for sale on the NYC market that were inhabited by all manner of celebrity past and present. I’ve spent parts of the last decade looking at much less desirable habitations of the men involved in the ‘planes operation’ (9/11) around the world from Kuala Lumpur to San Diego. Blog entries like this one are not meant to be exhaustive chronologies but a portion of my research.

Yesterday I finally made the trek from midtown Manhattan to a northern New Jersey slum called Paterson where up to six of the hijackers stayed during the summer preceding 9/11. I took a Latino shuttle bus from the front door of the New York Times’ ivory tower across from the dreary Port Authority bus terminal. The unassuming coach then pulled away from Arthur Sulzberger Jr’s vertical empire of glass and steel toward the Hudson River, through the Lincoln Tunnel and on to Paterson and neighboring Totowa, New Jersey.

In continuing my (what seems like) never ending journey to document the lead up to 9/11 which has been quite a global endeavour, it had been bothering me that I haven’t done some of the work closest to home.

According to man called Jimi Nouri, Hani Hanjour (believed to have crashed American Airlines 77 into the Pentagon) and Ahmed al-Ghamdi rented the third floor unit in May of 2001. It was in this red brick black where Nawaf al-Hazmi would relocate after leaving San Diego now joined by his brother Salem and Khalid al-Midhar along with Majed Moqed and Abdelaziz al-Omari.

On a side note, al-Omari was mentored by Suliman al-Elwan, a jailed Saudi Salafi theologian profiled by my colleague Murad Batal al-Shishani for the February 2011 edition of Militant Leadership Monitor (which I edited-subscription only). 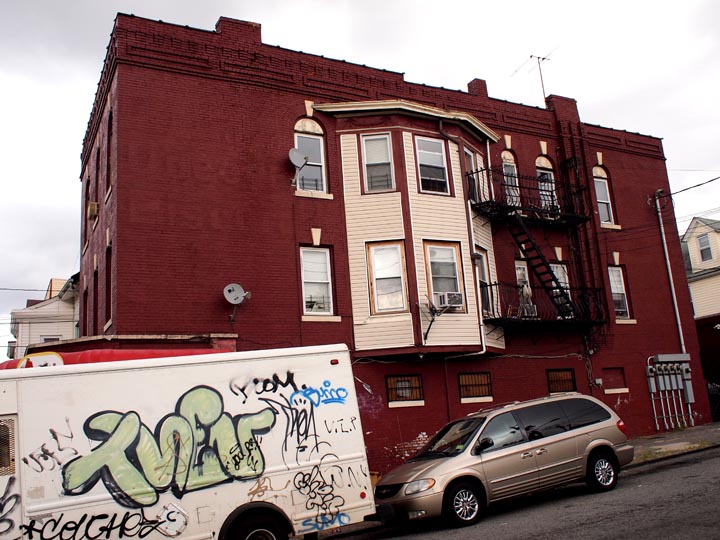 Infamy slept here, on the third floor in the back. ©2012 Derek Henry Flood

The next stop on my trek took me just over two miles directly down the road to the ATS travel agency in the lower middle class town of Totowa. It was here that Hani Hanjour and Majed Moqed bought Hanjour’s ticket on AA 77 for 9/11. (For reference see: FBI Summary  about Alleged Hijacker Hani Hanjour, p.50.) This small converted house on a hill in north Jersey unknowingly facilitated partial destruction of the Pentagon. Undoubtedly all of the people who inhabit or utilize these particular locales today would prefer these highly unpleasant affiliations end up in the dust bin of history but I am trying ensure, sorry to say, that they never be.

In 2010, I revisited the Parkwood Apartments in San Diego’s Clairemont area and noticed the complex had been pleasantly renamed “Blossom Walk” since I first photographed them in 2002 after finding out that Nawaf al-Hazmi, Khalid al-Mihdhar, and allegedly Saudi student/spy Omar al-Bayoumi had resided there.

From the hijackers’ cockroach infested apartment in Paterson to the World Trade Center is a distance of about 23 miles. So this post doesn’t seem entirely an abstraction, I thought I should include an image of 9/11 itself. ©2001 Derek Henry Flood 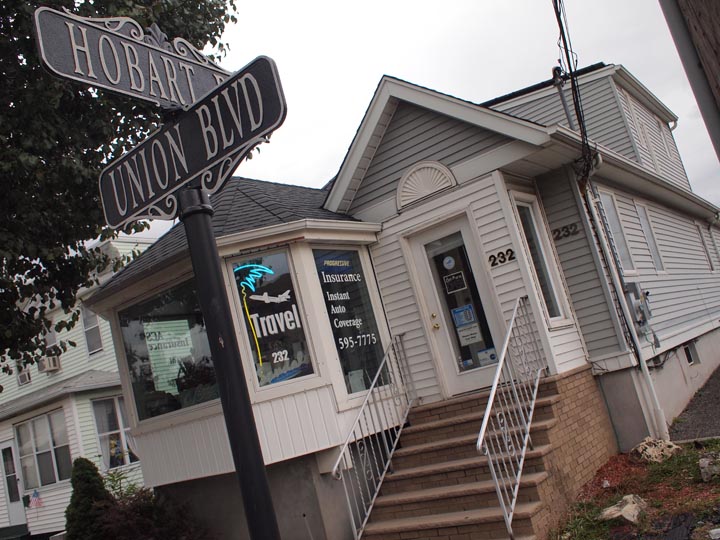 The Passaic River that divides Paterson between the rather well-kept Middle Eastern small business community where the hijackers ran errands from the run down black and Latino neighborhood where they holed up six men in a one bedroom apartment until days before the attacks. ©2012 Derek Henry Flood

My third and final stop on the Jersey terror tour brought me to the tidy Arab and Turkish enclave of south Paterson below the Passaic River. I’d first gotten off the shuttle bus here far too early at the beginning of the day when I was trying to get my bearings and so I came full circle back to Main Street. Bathed in a splendid late afternoon sun after a very light rain shower was Apollo Travel on Main Street.

It was here that in early July 2001 Mohammed Atta bought his ticket from Miami to Madrid via Zurich in order to rendezvous with Ramzi bin al-Shibh (though they ended up meeting in coastal Catalunya when bin al-Shibh could only get a ticket from Hamburg to Reus Airport) in what was believed to have been a final planning meeting for the planes operation in the EU. As a Yemeni, bin al-Shibh was unable to secure an American visa to join the men in Paterson or south Florida. He now resides at the detention facility at Guanánamo Bay.

For more on this, see my post from August 2011: Retracing Mohammed Atta’s Footsteps in Catalunya 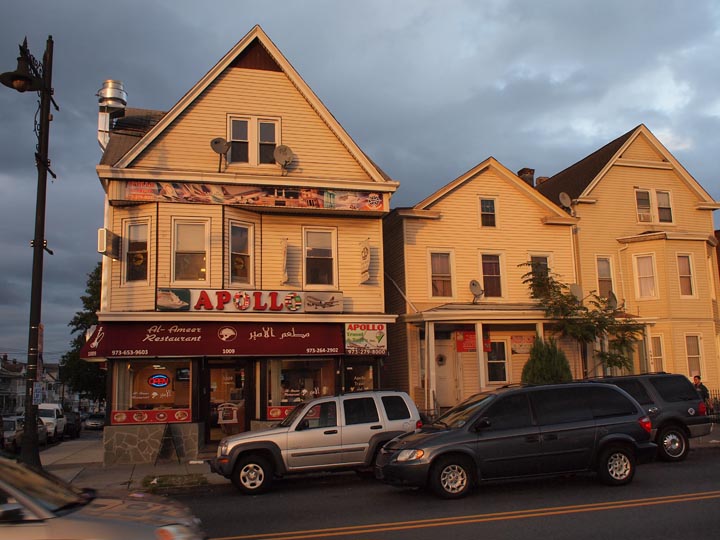 Exhausted I flagged down a shuttle bus trundling down Main Street bound for Manhattan. Listening to Bloc Party’s Four on my iPod I look through the windshield as the bus crests over a slight hill on the highway to see the new World Trade Center in the distance towering over the New Jersey foliage. I realize the AQ operatives would have inevitably seen this view while they were driving around this area doing their mundane errands with the Twin Towers–their intended target–rising above the hot Atlantic landscape 11 summers ago.

I thought about how many people in this country and around the world, especially those that never had to live through 9/11, still cling to wildly unfounded conspiracy theories rather than confront and cope with history and reality. To see these ordinary facets of the 9/11 plot, the air ticket offices, halal meat markets, run down apartments, an ATM here, a big box store there, is to visit a painful period of recent American history that lacks any of the glamour of the elaborate plots dreamed up by the ‘inside job’ crowd where suited Bilderbergers in Langley or Tel Aviv or god knows where planned to hoodwink the entire world on live television.

What’s partly fascinating in all the exploration I’ve done from San Diego to Hamburg to Scottsdale to Kuala Lumpur to Los Angeles to Bangkok and now New Jersey is the sheer banality of it all. There is no imagined evil lair from an Cold War Ian Fleming novel. These are living, breathing locales. I bought a Vitamin Water in the utterly non-descript mini-market below the hijackers old apartment. All of it still exists for those that bother to look. 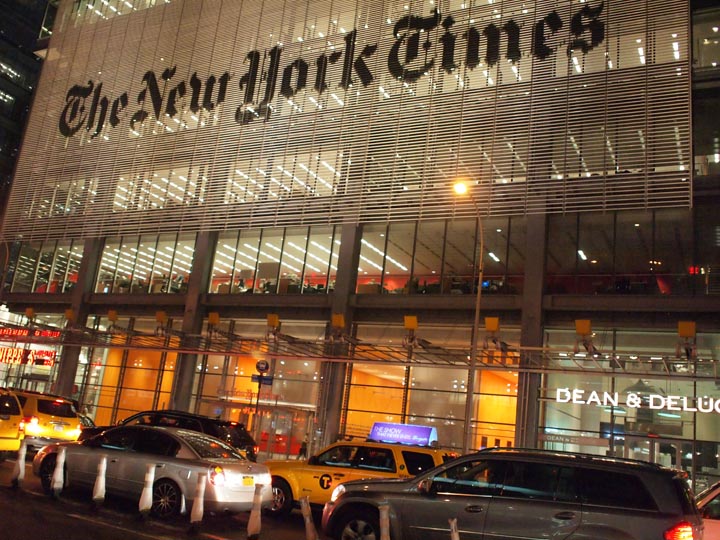 My day ends where it began as the shuttle bus drops me off at the base of the New York Times corporate headquarters on 8th Avenue and West 40th Street in Manhattan. ©2012 Derek Henry Flood