Leo Villareal’s BUCKYBALL installation in Madison Square Park. Seems like an obnoxious display of power when thousands in the city are still without electricity (although its LED tube lighting may use relatively little wattage it looks abrupt when considering those on the city’s forsaken periphery).  ©2012 Derek Henry Flood

New York- So weird. A week ago today I was getting thrown around Long Island City by 90 mph gales as Hurricane Sandy thrashed Queen’s over gentrified littoral while NYPD barked on loudspeakers through sheets of rain not to get near the piers while shooting photos. In the interim, houses were smashed and burned, whole boardwalk areas ravaged and now tens of thousands of people are not homeless from one day to the next. But most of the lasting damage was hyper localized to where people in midtown and uptown areas of Manhattan had their lives interrupted only when the subways were demobilized all over the city as a precaution. I trekked around in an effort to do what I could to document the crisis–with an image from this blog getting selected for New York Magazine’s Sandy portfolio “What We Saw When the Lights Went Out.”

Many, many improvements have been quickly made, particularly in the areas of Manhattan that were politically and economically prioritized. But in the outskirts of the so-called outer-boroughs, people may likely freeze tonight, out of sight, out of mind from the rest of this city. People will shiver in the cold shadow of tomorrow’s mega ego election where a wobbly incumbent  who’s carried out highly dubious extra-judicial assassinations of American citizens in Yemen, faces off against a “weird Mormon billionaire” as an old friend of mine put it (though he’s only worth a paltry reported $250 million).

As largely toothless idioms like “the new normal” and neologisms like “superstorm” were thrown around all week by politicians and media figures, significant change will not occur until long outdated thought paradigms are cast aside forever, a highly unlikely proposition. Americans have been brainwashed for the last decade that Sunni terrorism of the Salafi-jihadi strain is the biggest threat to their survival (or messianic Shia Twelver state warfare from Iran if one is a Likudnik).

This narrative is only remotely believable if one narrowly views the struggle for and within humanity as amongst various interpretations of monotheisms. Rubbish. The fundamental threat to human survival is a catastrophic misreading of the environment, human and animal evolution, and the development of the solar system we inhabit. The media and politicos are extremely unhelpful in this regard describing the violent characteristics of a terrifying natural occurrence like Sandy using terms like “deluge” and “biblical proportions.”

Not to say these forces in the world are not genuine threats but they are a mere blip during the long evolutionary march of history. The terror wars have spawned a vast and mostly unregulated and hence unaccountable security industry that is now here to stay. Fear Inc. has been very profitable for some but has provided little palpable public benefit beyond those personally enriched by constantly over stating imminent threats on the horizon. In this period, the global  environmental crisis has carried on untended to as the proverbial ‘elephant in the room.’ Developing a smarter, faster drone air force to chase finite  “bad guys” in the world’s ungoverned geography is far less challenging than confronting large scale glacial meltdown and rising sea levels.

New York Governor Andrew Cuomo encapsulated my point perfectly the other day with this quote: “[Utility companies] They’re regulated by the public service commission. The utilities were not created in the Bible. They’re not in the Old Testament. They’re not in the New Testament. God never said, ‘New York shall have these utilities forever, and Con Ed is the utility, and there’s nothing you can do about it. It’s really not in the Bible.” Here is a case of a frustrated, angry political leader–perhaps without giving such a statement much rational forethought–injecting and legitimating Abrahamic themes into the public discourse thereby doing a great disservice to his millions of constituents by obfuscating the real history and nature of…nature.

Figures like Cuomo are not wont to offhandedly riff on the Jurassic Period or the Mesozoic Era during such a public tirade but perhaps they should. Referencing Noah in an era of bitter and confused climate change debate certainly isn’t helpful. Western observers scoff at Iranian President Mahmoud Ahmadinejad for hailing the sought after return on the Mahdi–the promised return of the Twelfth Imam who has been in a state of occultation since he ‘disappeared’ during the year 874 A.D.  But are American leaders pandering to the masses really all that different in this respect?

We need more reasoned, empirical science and far less politicized seance if people are to grasp the environmental threats that lay before them and realize the inherent grand context of such events. It shall be no easy task. The “March of Unreason” continues. 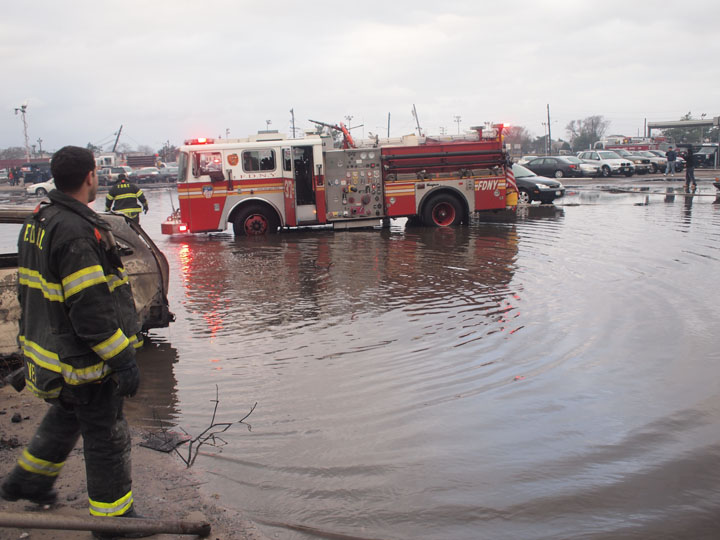 Rather than a nonsensical “deluge,” Hurricane Sandy was part of a continuum of punctuated natural violence that has formed continents and oceans, and played a key role in human evolution and its great migrations. ©2012 Derek Henry Flood

← Blackout
The War That Was Barely Mentioned →