New York- While Americans in many quarters erupted with both joy and relief that Barack Hussein Obama was reelected POTUS while right-wing ideologues and extremists (which may simply be cover for racism in some quarters) constantly harping on the just-around-the-corner reemergence of so-called (though debunked) ‘American exceptionalism‘ pronounced the country politically dead, there was a disquieting dearth of serious foreign policy debate among American voters expressed in the mainstream media.

I decided to post these heretofore unpublished images of clandestine soldiers from 11 years ago in a small effort to demonstrate just how long Americans have been at war in Afghanistan. I blacked out their eyes in photoshop to give the images that whole cloak and dagger ‘redacted’ look. 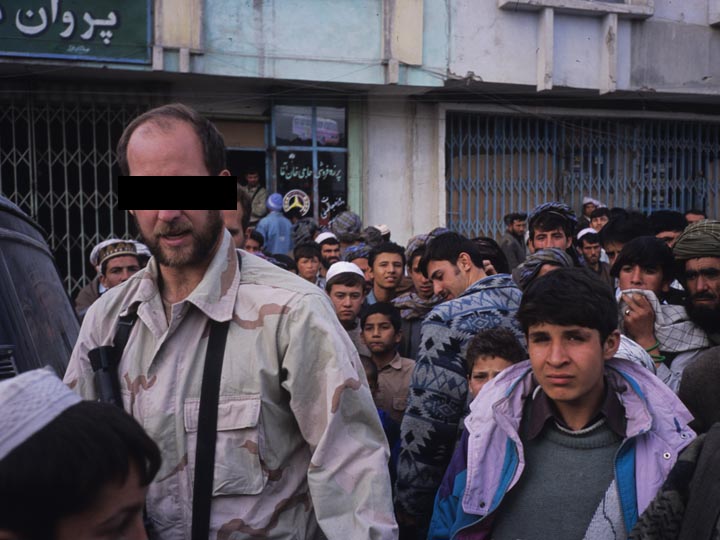 An American Special Forces soldier from an Operational Detachment Alpha unit mills through a curious crowd of men and boys (no females) after the Toyota Landcruiser he was riding in blew out a tire. Note that his uniform is distinctly devoid of rank or any other military insignia. ©2001 Derek Henry Flood

American soldiers continued to be killed in Afghanistan throughout the election cycle with another solider reportedly killed in an insurgent attack in Uruzgan Province less than four days before the election. America’s two principal Anglosphere military allies, the UK and Australia, also continued to withstand troop deaths in the lead up to Obama’s second term as president. While numerically small in light of US fatalities, they are comparatively significant in relation their respective population sizes vis-a-vis the United States.

The US has lost a total of 286 troops in Afghanistan this year alone according to iCasualties.org and there are still nearly two months left of 2012 with a total of 2150 since 2001.

And let us not forget that Afghans in the ANA and ANP keep dying too.  In the name and manner attacking Afghan security forces, the insurgency continues to slaughter a number of hapless civilians as well. Somehow though, grave human rights violations are either cast aside in an election cycle or even rendered ‘unpatriotic’ when showing concern for such deaths abroad causes natural friction with Americans who have swaddled themselves in the unevolved retrograde tenets of isolationism in the context of an incredibly difficult economic crisis at home. 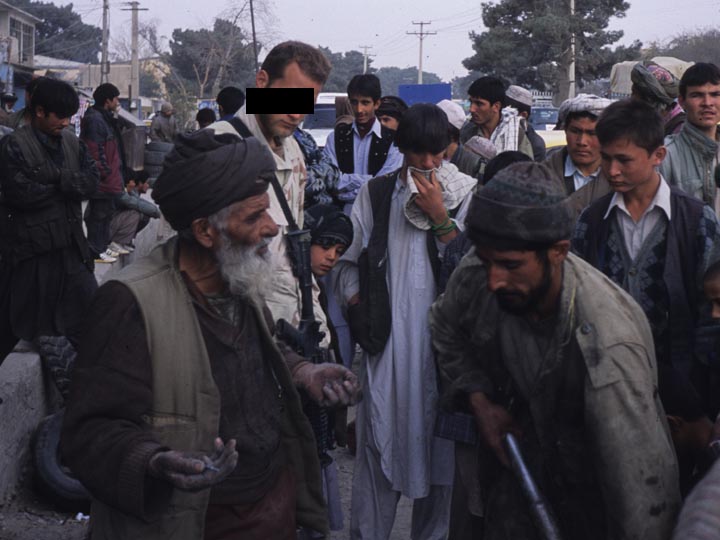 An American Special Forces soldier looks on as several Afghan mechanics replace the tire on his white Landcruiser in Mazar-e-Sharif while the prisoner uprising-cum-massacre at the mud crenellated fort of Qala-e-Jangi was raging. Look how tall these guys are! They were towering over the locals with every step. ©2001 Derek Henry Flood

The question remains: what will another Obama term do to actually end not the war per se, but end American involvement in Afghanistan? While the President trumpeted the withdrawal of American combat troops Operation New Dawn, the 2010 successor to Operation Iraqi Freedom that most Americans were entirely unaware of, there are still tens of thousands of armed contract soldiers in Iraq who are at best woefully under regulated. In effect, the United States IS still in Iraq though under a different guise.

The struggle for Iraq has in no way ended. Insurgent attacks on Iraqi security forces and Shia civilians continue to be successfully mounted. If and when the United States withdraws its vast combat forces from Afghanistan, it is highly likely that the 1990s civil war fault lines will be reignited to some degree but with the influx of newer arms and better vehicles. America may leave Afghanistan at the midway point of Obama’s second chance in office, but there is little indication an American president can actually “end” the war in Afghanistan.

Will Obama’s little publicized Iraq solution be a template for a planned 2014 Afghan pull out? Of course the reality of Iraq’s human geography is far different than that of Afghanistan. Iraq’s highly urbanized population lay mostly along the north-south veins of the Tigris and al-Furat (Euphrates) River whereas Afghanistan continues to remain a primarily decentralized rural demography. In essence Iraq has things to protect-oil infrastructure, diplomatic installations and local governance institutions which require continued defense. This is where the contractors come in. Afghanistan has far fewer such ‘target rich’ features but nonetheless the contractor business model is humming along at the fractured juncture of South and Central Asia, despite its disturbingly low profile. 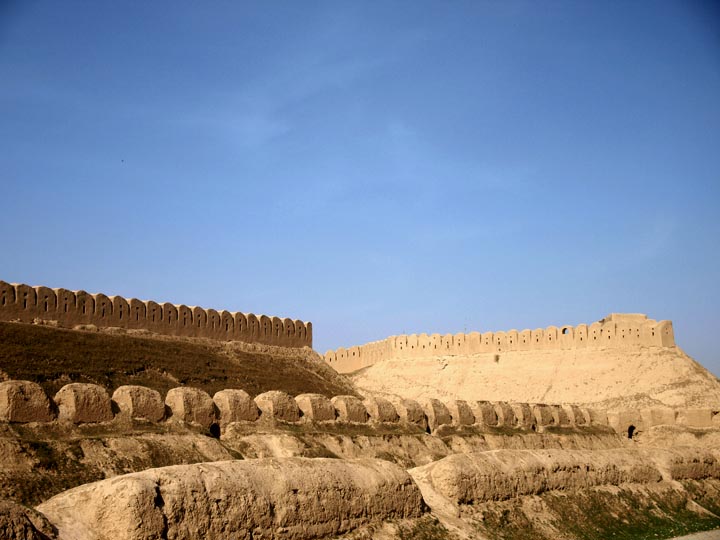 The fort of Qala-e-Jangi, site of the November 2001 Taliban prisoner uprising that left hundreds of captives dead, pictured in 2008. The fighters had surrendered after being surrounded during the battle of Kunduz and were brought to the fort by order of Abdurrashid Dostum’s Junbish-i-Melli troops. Things quickly went south as we were to find out. When I visited the site these many years later, it evoked a painterly, bucolic feel with cows nibbling on verdant grass and children playing at the base of its mighty walls. ©2008 Derek Henry Flood

Zabiullah Mujahid, the vociferous Taliban spokesman, threw in the Islamic Emirate’s two-cents following the close of Tuesday’s polls hoping to appeal to Americans pragmatically: “Obama has realised that the Americans are tired of the war and the backbreaking costs of the war…Therefore, he should pullout the occupying forces from our country as soon as possible and prevent the deaths of more Americans.”

← From Unreasoned Righteousness to Reason
Welcome to Hell →