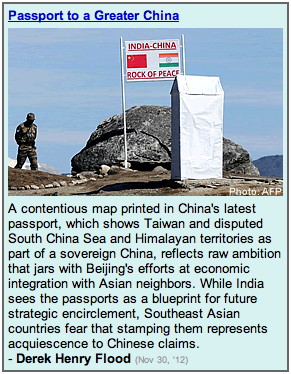 New York- I had a piece out in Friday’s edition of Asia Times Online about the massive diplomatic row belatedly caused the Chinese government’s new biometric passport. In one fell swoop, Beijing managed to ruffle feathers from the remotest corners of the South China Sea to the Himalayas. I did my best to write a long-ish piece within reason discussing most of the disputes highlighted by the passport as well as some that either were not or have not yet been discussed in the mainstream press.

There seems to be a now ingrained conventional wisdom that the era of large scale land wars between state powers is dead and that from the 1990s onward conflicts will be either state versus non-state or sub-state groups as in Lebanon 2006 or states fighting via non-state proxies versus discredited regimes as in Syria today. But as the short but hot August 2008 Russian invasion and brief occupation of the Republic of Georgia illustrated, a conventional land war in Eurasia or a maritime one in the cases of the East and South China Seas is far from out of the question.

China and India fought a brief but symbolic land war in 1962 when the PLA invaded Arunchal Pradesh and permanently occupied Aksai Chin while acquiring the Shaksgam Valley from Pakistan the following year in a quid pro quo arrangement with the Pakistani regime at the time (the Sino-Indian War). Then China invaded Viet Nam in 1979 as retribution for Hanoi forcibly deposing the Chinese-backed Khmer Rouge and subsequently occupying neighboring Cambodia the previous year (the Sino-Vietnamese War). [It should be said that both of these conflicts can be discussed in the broader context of the Sino-Soviet split]

To young post-Cold War kids, these events may as well be consigned to ancient history but they are very much alive in the minds of the military strategists and foreign policy Mandarins of the aforementioned states. A lot has changed since 1962 in that India has attempted to form a nuclear balance against China-which had the deleterious diplomatic side effect of spawning a nuclear arms race with erstwhile China ally Pakistan. Viet Nam, meanwhile, pulled out of Cambodia in 1989, lost its Soviet patron in 1991, and is in the awkward process of drawing closer to the United States-and its ASEAN ally the Philippines-partly in reaction to its varied and sundry islet disputes with China to the north (even though both Hanoi and Manila have claims on the Spratlys).

One point I want to quickly clarify is that the so-called ‘nine-dash’ line that encompasses much of the South China/West Philippine Sea predates the Maoist takeover of China in 1949-but just barely. The New York Times has alluded to this pre-Communist cartographic assertion here and here. The line was originally drawn by the Kuomintang regime in 1947 and then adopted by Mao beginning in 1953 according to a Singaporean publication, Energy and Geopolitics in the South China Sea: Implication for ASEAN and Its Dialogue Partners. Some sources say the original U-shaped line was comprised of 11 dashes and later reduced to nine.

On a much lighter, soulful note, check out this Nina Simone gem I found on Youtube:

← Welcome to Hell
Viewing Syria Through the Chechen Prism →