A lot of Iranian voters were absolutely crushed by the Mahmoud Ahmadinejad’s “Landslide” victory at yesterday’s polls. Unbeknownst to me, according to a piece in today’s LA Times, Iranian Americans and more recent Iranian immigrants were allowed to vote at a hotel near LAX. I highly doubt a single vote was cast for Axis of Evil spokesman Ahmadinejad here in Tehrangeles. Mir Hossein Mousavi was Ayatollah Khomeni’s Prime Minister during the 1980’s but two decades later he rebranded himself as the reform candidate in league with former president Mohammed Khatami of “Dialogue of Civilizations” fame. Many Iranians are out in the streets of Tehran claiming the vote was clearly rigged. It is unlikely protest will have an effect on the elections ultimate outcome but Iranians are clearly demonstrating their frustration with first the ballot and then the brick. If only Americans had been so vociferous in 2000 and 2004…

Was Mousavi “Swfitboated” by either Ahmadinejad’s Alliance of Builders of Islamic Iran or by the office of the Supreme Leader? We will probably never know in the quintessentially cryptic machinations of Iran’s domestic politics. 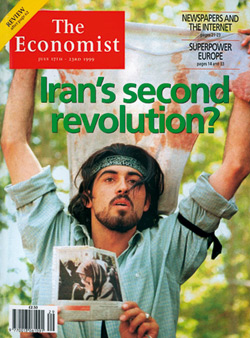 I can only hope that none of this weekend’s protesters end up like this poor man, who we now now as Ahmad Batebi, when I visited Iran ten summers ago.