New York- I have an article out this week in Asia Times Online based on my very different experiences in Syria from 2002-2012. Throughout the decade after 9/11, Syria–though absolutely central to the history and culture of the Arab realm–was viewed as a quiet backwater for both the West and it jihadi opponents. Syria’s mukhabarat intelligence services either facilitated or turned a blind eye to the transit of salafi fighters from North Africa and the Arabian Peninsula into a besieged Iraq. 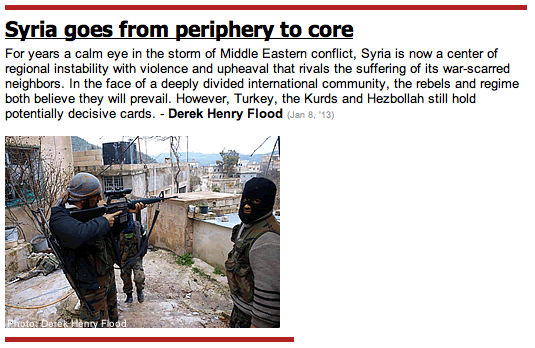 In the other direction, it acted as a very willing conduit for Iranian arms and treasure into tiny Lebanon on whom it holds in a geographical bear hug. But one of my key points is that Syrian intelligence officers made Syria itself one of the safest places in the world–unless one was a terrorism suspect extraordinarily rendered there or a member of the Brotherhood languishing in one of the country’s awful prisons. But what was remarkable at the time was that as hot wars raged on either side of it, Syria remained completely quiet internally until its revolution commenced in March 2011.

After Hama in 1982, Syrians were well aware of the regime’s potential for wrath. If jihadis had made attacks inside Syria, its borders would have been shut down overnight thus sealing off the vital jihadi pipeline to western Iraq.

Even though jihadis viewed the Assad regime as perhaps a caricature of apostasy on earth, they never directed their ire toward the near enemy. Instead they sought to attack the occupying forces of the far enemy stationed inside Iraq in the aorta of the ummah along with non-Sunni and non-Arab Iraqis (and Sunni Arabs who cooperated with the occupation forces).

While even Jordan suffered the horror of massive, coordinated suicide bombings in Amman in November 2005, Syria suffered no similar consequences during the core of the Iraq conflict.  It seemed that the Assad regime–steeped in its own post-colonial Arab nationalism and an historic enmity toward rival Iraqi Ba’athists–had found common cause with or at the very least sought to accommodate those traveling in the salafi-jihadi caravan.

Whatever we want to read in, Syria, which had done far more to crush Sunni Islamism in the past than Jordan’s famed GID, was not made a kinetic target of jihadis throughout the decade after 9/11. It certainly may have been an ideological target by Sunni exiles in London and elsewhere but the country did not suffer a suicide bombing until it was consumed by the current civil war.

Damascus simply didn’t withstand blowback as Jordan, Saudi Arabia, Spain, England and others had. Now Syria itself is the magnet for those who want to carve out a Sunni state in the heart of the Levant or any other piece of territory they believe they can hold and build.