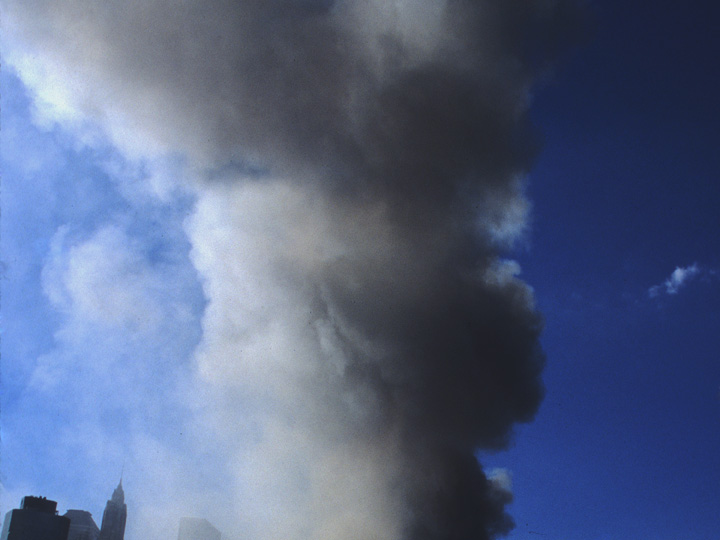 A ghastly toxic plume of smoke and ash rises above what would instantly become known as Ground Zero after the total collapse of the North and South Towers (yet before the fall of Tower 7) of New York’s World Trade Center on 9/11. ©2001 Derek Henry Flood

Thira- Two years ago when I was here on this island, the principal of the Santorini archipelago in Greece’s Cyclades group, I was quietly reading the Eleventh Day The Full Story of 9/11 and Osama Bin Laden by Anthony Summers and Robbyn Swan. That book was a2012  finalist for the Pulitzer Prize in the History category. When nearing the last chapter and scanning the footnotes I was delighted that one of my articles was cited in them.

Here I am two years later catching up on some much needed personal writing. Seeing as we recently passed yet another 9/11 anniversary, it is clearly not one of those topics that will ever be “over” like the endless accounts–each one claiming to be more definitive than the last–put out by publishing houses each year on the Second World War (a.k.a. The Great Patriotic War).

I will never forget taking my photojournalism portfolio by an agency in Manhattan in early 2002 after coming home from six weeks in Afghanistan and Central Asia and a photo editor telling me: “sorry but Afghanistan is kind of like, over…” I heard similar things regarding 9/11 less than a year after it took place. But it is obvious these events will never be “over.” They steered the course of world history in our lifetime. It is simply arrogant to think otherwise. Short sighted people working in fast-paced New York media may have been eager to move on to the next story but I was not. I covered the wars in Afghanistan and Iraq, sure, but even at the time I saw it all as a unified story where each successive event was linked to previous ones to form a continuum of globalized conflict that didn’t respect the Westphalian state system.

I recall talking to a close friend here on the island two years ago and telling him about the book I was then reading and the writing I was doing. His first reaction was “but what about building 7 (WTC 7)?” WTC 7 is the lynchpin of 9/11 conspiracy theorists often known as “truthers.” The perfect pancaked collapse of WTC 7 lead skeptics and the paranoid to insist WTC 7’s collapse was what is called a controlled demolition–meaning it was premeditated which would then imply that perhaps all of 9/11 was some sort of “inside job.”

One of the things people can never accept about 9/11–especially those who were not physically in lower Manhattan that particular day–is that even though it was a televised and well-documented tragedy is that there are some things that all of us will simply never know and we must accept this fact. There were so very many moving parts in the 9/11 attack and ensuing tragedy that it will never be possible to know everything. In a city of 8.5 million in an event with thousands of simultaneous deaths, many people cannot accept that everything about this event cannot be known or understood in its entirety in our time.

For those who actually witnessed the horror that day, not much more need be said in many cases. For those who were far away or too young at the time, they have the luxury of viewing 9/11 as some sort of theoretical abstraction to be neatly dissected by its various anomalies in the realms of physics, chemistry or engineering.  I witnessed WTC 7 engulfed in flames when I arrived via bicycle well after the collapse or the South Tower. 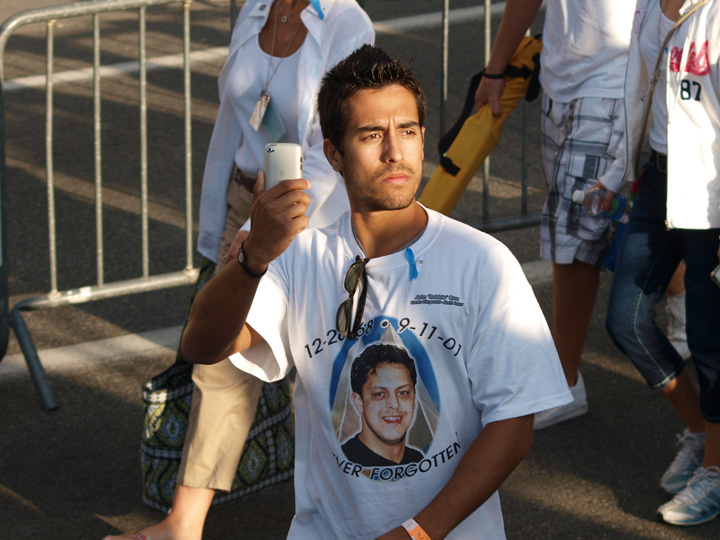 Families arrive en masse to the site of the former World Trade Center to grieve once more for the 10th anniversary of the 9/11 terrorist attacks. The attacks claimed victims from across New York’s incredibly diverse ethnic and religious communities. Many of the families had t shirts created in honour of their loved ones. ©2011 Derek Henry Flood

Of course the U.S government, particularly the Executive Branch has done virtually nothing to quell those of a conspiratorial bent. So many documents remain classified or partially redacted. Any why, we must ask? To protect princes and princesses in the Saudi regime in order to not disrupt the flow of oil to U.S .shores? Or is it merely the bureaucratic culture of secrecy continually perpetuating itself? In the era of wikileaks and Edward Snowden, one may wish some dusty 9/11 documents be released rather than, say, embassy cables from Mauritius. There was a grandiose conspiracy behind 9/11 and it was cultivated in a suburb of Hamburg, a suburb of Kuala Lumpur, San Diego and Tarnak Farms outside Kandahar and a litany of other locales rather than at Langley or at Larry Silverstein’s office in Manhattan. 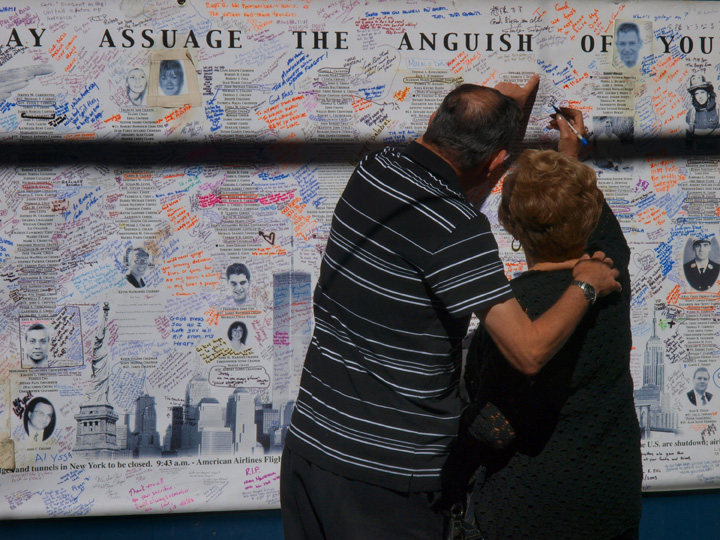 Relatives of victims sign a Ground Zero tribute wall outside the annual memorial ceremony on the ninth anniversary of the 9/11 terror attacks in lower Manhattan. ©2010 Derek Henry Flood

Why certain people prefer to entertain conspiracy theories is often a broader question involving human psychology. The conspiracy theorists are correct on something though. The American government is hiding things about 9/11 from its citizenry. But it is to protect its own tragic incompetence and ego-driven buffoonery than its dark hand in the 9/11 plot. The U.S. government is not made up of an underground lair of dastardly super villains hatching fanciful plots.

A fellow firefighter grieves for a fallen comrade, Lieutenant John Napolitano, a decade after the attacks that shook New York to its core. ©2011 Derek Henry Flood

Anyone who has spent anytime in the corridors of Washington knows that it is made up of individuals, some of them intelligent, some of them quite ordinary, who have had often disproportionate power bestowed upon them by a ballooned security clearance system.  Some of these individuals have their own spirited agendas such as the preservation of Israeli military superiority in the Middle East, the promotion of hardline Protestantism, retrograde Catholoicism or more mundane concerns such as procuring defense contracts to keep or bring jobs and thereby votes back home in their respective districts. OK, so calling something the “Office of Special Plans” certainly doesn’t help the matter in the eyes of the avidly skeptical. But Douglas Feith was and is an idiot, not Lex Luther.

I very belatedly stumbled onto this 2008 documentary regarding the mystery surrounding WTC 7 by the BBC entitled 9/11 – The Third Tower.