A portrait of Wahab Mohammed Sharir, a Kurdish peshmerga fighter in my fixer’s living room in Kirkuk. Shahrir had been fighting the Ba’athist government in the 1960s and 1970s  before the Algiers Accords were ultimately signed in 1975 between Iran and Iraq where the regime of Shah Reza Pahlavi agreed to cease Tehran’s support for armed insurgents in northern Iraq. ©2013 Derek Henry Flood

Barcelona- Proud to announce that I have to lead story in this month’s issue of Jane’s Islamic Affairs Analyst (Subscribers only). I travelled along a section of the so-called “Green Line” that divides Iraqi Kurdistan from Arab-majority Iraq.  Iraq’s Green Line was established after the 1990-1991 Gulf War when the northern no-fly zone was implemented.  Run out of Turkey’s Incirlik Air Base,  the no-fly zone enforced above the 36th parallel was known as Operation Provide Comfort and Operation Provide Comfort II (which then became Operation Northern Watch). It allowed for the setting up of a de facto Kurdish administration divided between the Kurdistan Democratic Party and the Patriotic Union of Kurdistan. 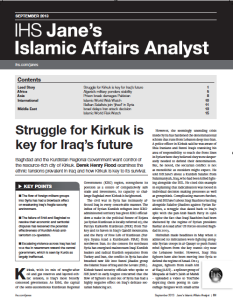 Western air power in the Clinton years let that harden into what would eventually become the Kurdistan Regional Government run by both of the major Iraqi Kurdish dynastic parties. When the United States military burst through the hulking sand berms separating Iraq from Kuwait on March 19-20 2003, U.S. Special Forces teamed up with Peshmerga fighters to not only tackle Ansar al-Islam’s base along the Iranian border but also to gain a foothold in cities like Mosul and Kirkuk when Turkey’s parliament refused the Pentagon the right to transit Turkish territory to topple the government in Baghdad.

What I found on my exploration along the former Green Line is that the KRG is creating ground realities while the federal government helmed by  Nuri al-Maliki can’t quite get its act together regarding the status of disputed territories along this fluid internal border. Part of why the demarcation of the Green Line matters so much is that when there are oil or gas blocks in these lands and hence potentially great wealth to be attained by whomever controls them, a relict of 1990s political geography is now of utmost importance.

A group of Peshmerga fighters proudly boasted to me that their makeshift little bunker was south of the old Green Line. And with a weak federal security force combined with Kurdish nationalism, this seemed to really mean something. Neither side appears ready to forge a genuine settlement on the disputed territories meanwhile energy multinationals are eager to get their hands on as yet undeveloped resources.

Thus far both Erbil and Baghdad have been fairly intransigent on their respective oil development policies. Both have made stark statements that oil companies shouldn’t work in both Kurdistan and southern Iraq. They should be forced to pick sides. However the exploration by ExxonMobil may alter this tense arrangement.

Along this northwest to southeast line, the Kurds and the Iraqi Army did not seem to be allies but eyeing each other as well as looking for infiltrators from the Islamic State of Iraq and the Levant. 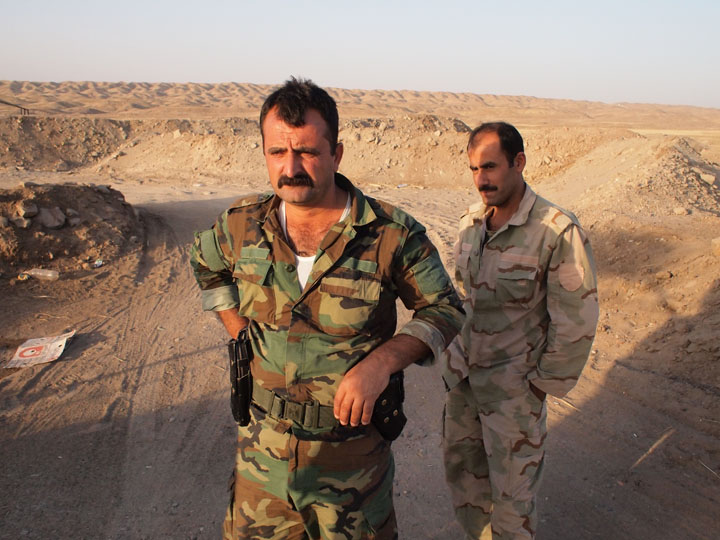 A Peshmerga commander beyond the old Green Line  gazes into the distance at an old Ba’athist military bunker that was destroyed in an American air strike on March 2003. Whether PM Maliki likes it or not, Kurdish military leaders are creating facts on the ground. ©2013 Derek Henry Flood

As the United States and France contemplate launching bombing raids to help topple to Ba’athist regime in Damascus, it would behoove leaders in Washington and Paris to look at the legacy of their involvement in Iraq (pre-2003 France was involved in Operation Provide Comfort). Toppling a dictatorship is the relatively easy part of the equation.