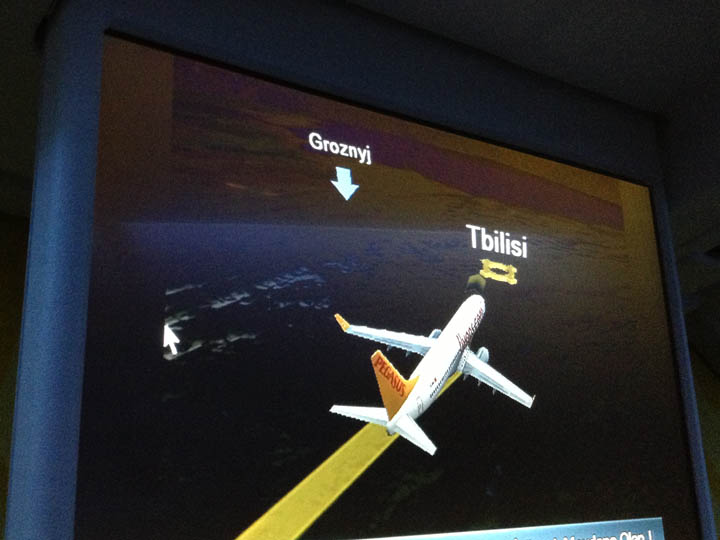 These digital flight path monitors on planes can act as an indicators of regional perspectives on the relativity of place names. Flying to Tbilisi on a Turkish budget airline, Grozny or “Groznyj” appears onscreen as you approach the Georgian capital. For many abroad, Grozny is still a place name that still evokes a modern day Stalingrad writ small after its infrastructure was relentlessly pummeled by artillery in the 1st and 2nd modern Russo-Chechen wars. For a Turkish tycoon it may simply be a future destination for his passenger planes or potential sphere of Turkish influence. This graphic however does not recognize the hard, bitter border between the independent republics of the South Caucasus and those under control of Moscow to their north. ©2013 Derek Henry Flood

New York- Sitting in a cafe on a bitterly cold winter day, I’m doing some writing regarding a character in my as yet unpublished manuscript who I found out perished fighting jihad in Syria’s tragically beleaguered Aleppo Governorate in late May 2013. I was taken aback by the very idea that someone I once knew went to Syria to fight ideological warfare and quickly became cannon fodder for the very same Soviet weaponry that caused him to fleee his homeland of Chechnya for safety in neighboring Georgia at the outset of the 2nd Russo-Chechen war that began in the autumn of 1999. This story became part of a recent article I authored for IHS Jane’s in London. When I set out from Tbilisi in October for the Chechen/Kist villages of the Pankisi Gorge, I never expected learning something like this would be the end result.

How Chechen militancy has transmogrified from the struggle for national liberation to more generalized jihadism is a reflection of how the world has failed the people of the Caucasus as a whole and how radical Sunni doctrines encouraging relgio-polical violence have metastasized, subsuming a largely Sufi people to the point where a handful of them are drawn to Aleppo like moths to a flame. As a Chechen colleague said to me in a recent exchange, “it’s sad what has happened to my people.”

So now I’m in the midst of dusting off an old writing project and breathing new life into it by adding in a dark epilogue. If those nitwits at the National Security Agency parsed this particular blog in their endless big data mining project I might become even more a “person of interest” or some other bureaucratic catchphrase to further justify their vast invasion of privacy and the violation of journalistic confidentiality.

The people I encountered on my earliest forays into the “war on terror” are still somehow relevant. From a guy I met in 2002 becoming “martyred” in Syria in 2013 to Dr. Abdullah Abdullah–who I first photographed in November 2001 and later in August 2009–being the chief candidate for the Afghan presidency in the April election there in 2014, these stories and the people populating them don’t just simply fade away.

One of my favorite quotes from all the years doing this stuff was when I was at the Corbis photo agency here in New York in January 2002 and an editor there told me “Afghanistan is over” and that I needed to move on and look for the next story (did she mean Iraq?). Afghanistan was never, and is still not, “over.” In 2014 Afghanistan is still a major story. As is the legacy of 9/11, the Chechen conflict, and even Iraq in my stubborn view. 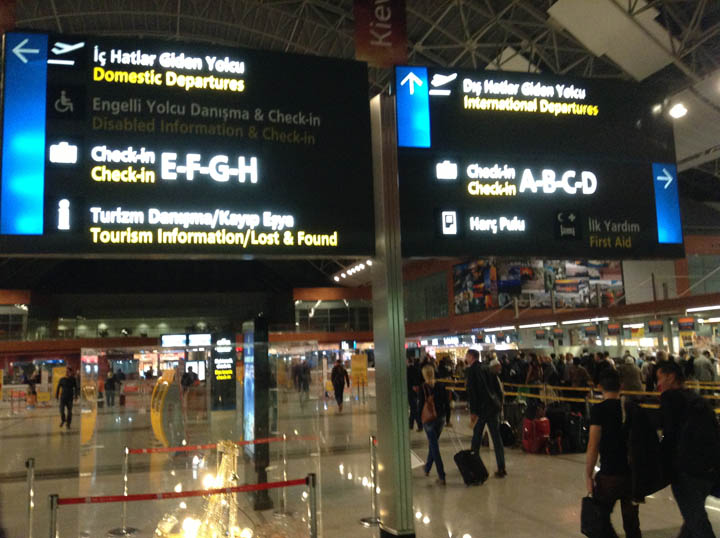 The check-in counters at the seriously revamped Sabiha Gökçen International Airport, Istanbul’s 2nd airline hub. This airport handles more obscure destinations east of Turkey, with an emphasis on former Soviet republics and Iran akin to Dubai’s Terminal 2 where you go if you need to fly to Najaf, Iraq or Hargeisa, Somaliland. I first came here in October 2001 to fly to Dushanbe, Tajikistan in order to cover the war in northern Afghanistan. Then I met an exasperated, award-winning Canadian/Texan photojournalist named Christopher Anderson who I helped navigate the Byzantine ticketing and boarding procedure. I remember him saying he paid $50 USD for taxi there, far from central Istanbul, while I had taken a ferry, 3 buses and then hitchhiked the final leg. He took an iconic photo that continues to be resold for book jackets to this day while most of my images have never seen the light of day.  He now resides comfortably in Brooklyn, photographing celebrities and politicians as a staff photographer for New York magazine while I am still going to war zones with no money and photographing mustachioed guys with Kalashnikovs. Perhaps I was too helpful… ©2013 Derek Henry Flood