Once popularized by media outlets as the “Mother of All Battles” mosque, the Umm al-Qura mosque complex sat in lush greenery save for the destroyed Soviet-era piece of armor that was likely hit in an airstrike in the “shock and awe days of mid-March a month before this image was taken. I remember trying to enter the mosque’s grounds with my Shia fixer and getting a less than warm reception from some men that I suppose were representing the Association of Muslim Scholars there. Umm a-Qura is situated in western Baghdad between the al-Adel and Ghazaliyah districts on the road to Fallujah. When the situation quickly became hostile, I put my camera down and we roared away in an old rattletrap of a car. ©2003 Derek Henry Flood

New York- I have an article out now for IHS Jane’s Islamic Affairs Analyst on the eruption of violence in Iraq’s sprawling western al-Anbar Governorate that borders the relatively calm governorates of Ma’an, Amman, Mafraq, and the somewhat sketchier Zarqa in Jordan, the war ravaged governorates of Deir ez-Zor, and Homs in Syria and, lastly, Saudi Arabia’s Northern Border Region. Control of Anbar is a security issue for the entire region that surrounds it when considering the war in Syria that is attracting foreign fighters like moths to a flame and the transnational outlook of salafi-jihadi thought in a geographically contiguous KSA. 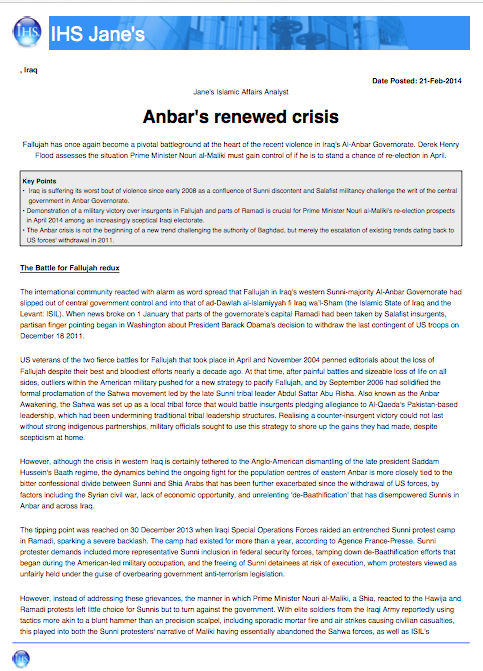 Anbar became the symbol of anti-American resistance in Iraq so much so that the restive northern town of Hawija in Kirkuk Governorate was referred to as the “Anbar of the North” by the US military at one time. Anbar became almost a catchall term for a place that was difficult to pacify through traditional counterinsurgency doctrine much less purely by means of military hard power. Only through cooperation and co-opting was the Sunni Arab insurgency there quelled for a time with the raising of Sahwa militias.

In the now bloody aftermath of the American troop withdrawal that took place at the tail end of 2011 and was hailed by President Barack Obama as ‘ending’ the Iraq war, Nouri al-Maliki, Iraq’s Da’wa Party die-hard prime minister, has done nothing to tamp down the collective ire of Sunni activists from Fallujah north to Hawija. Maliki’s moves have merely moved the Iraq war into a much more indigenous phase.

From accusing notable Sunni politcos of being involved in terrorism, a crime punishable by death in Iraq’s draconian penal code, to doing nothing to assuage the concerns of angry protestors, Maliki at least partly set the stage for the arrival of ad-Dawlah al-Islamiyyah fi Iraq w’al Sham, know locally by its acronym DAASH, and by its English acronym ISIL, into Fallujah’s city centre and sections of Ramadi and several villages in the respective surrounding areas at the outset of 2014.

The Iraqi elections are approaching quickly on the country’s troubled political horizon on April 30th. How ‘free and fair’ voting will be carried out under such circumstances is entirely unclear.

I’m illustrating this post with the following images because I personally feel much of what is going on in Iraq today can be traced directly back to the elaborately expensive yet incredibly poorly planned Bush/neo-conservative regime decapitation initiative called Operation Iraqi Freedom. That moniker seemed to me to say that 99.9% of all Iraqis were equally oppressed by Hussein’s dreadful Ba’ath Party policies.

By and large, yes, Iraqis were treated terribly by an anti-egalitarian strongman in a nation-state rife with deep tribal, sect, and ethnic division. But the late dictator could not have ruled for decades without a degree of genuine support fostered by patronage networks and adroit imbuing of his own ideology among at least a cadre of willing followers. 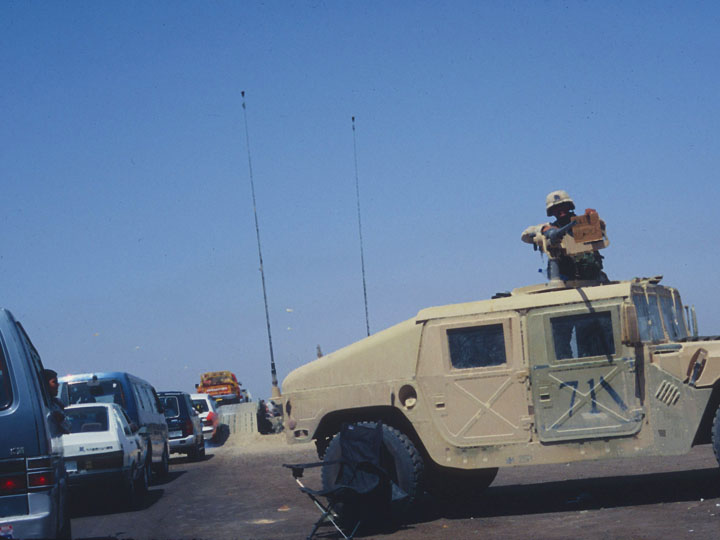 An American Humvee gunner holds a makeshift sign that reads “Go” in English and then Arabic at the entrance to a bridge over that Tigris River that has been partially destroyed by American munitions.Note the boy staring in wonderment out of the blue minibus on the left. These wars don’t happen in a vacuum and children often abound. Some of them undoubtedly would grow up in the following years to become militants attacking coalition forces and Iraqi federal forces. ©2003 Derek Henry Flood

But it should be noted that not all the Sunnis fighting the state right now are doing so under the black banners of salafi-jihad. Though those banners make for exciting headlines, there is a viable retro or neo-Ba’athist strain of rebellion going on. Though it had been primarily focused more on the Kurds and territorial issues pertaining to the Green Line in terms of strategy and tactics, the Jaish Rijal al-Tariq al-Naqshabandi (JRTN) and Intifada Ahrar al-Iraq which has been described as a political front group for the JRTN–since gone operational, are kind of Ba’athist revivalist groups (or two parts of the same movement depending on perspective).These movements have sought to resuscitate Saddamist symbolism to garner the support of disaffected Iraqis tired of what they perceive as “Safavid” (Iranian)-influenced political primacy in Baghdad. Certainly DAASH/ISIL and JRTN have starkly different ideologies and objectives, but for now they have a common enemy in PM Maliki and those who defend and support him.

Forest of destruction. All that was left of this particular building after a “surgical strike” were its ornery pillars which refused to topple. Upon arrival in Baghdad, what immediately impressed upon me visually was how the American air campaign in Iraq differed from that I’d witnessed in Afghanistan after 9/11. American bombardments there struck mostly unremarkable hillsides as the Taliban had hardly any fixed concrete targets. Iraq was the polar opposite as swaths of brick and mortar cities were leveled in an instant as ignorant Fox television viewers looked on with a non-chalant curiosity. ©2003 Derek Henry Flood 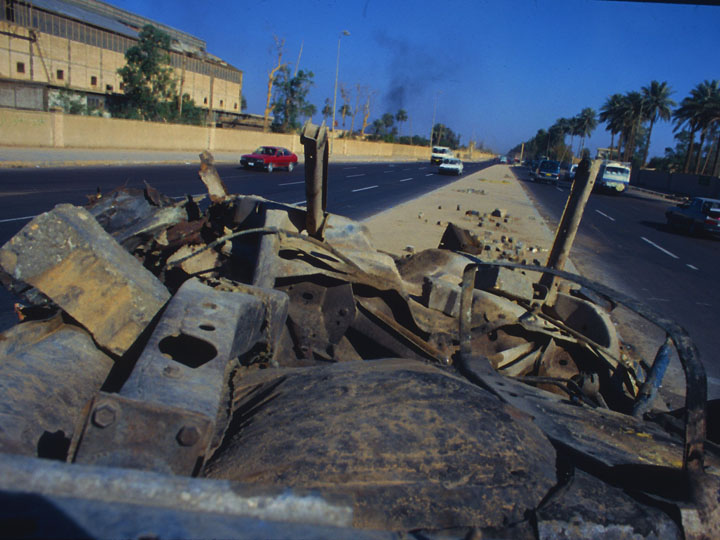 Although the Americans wouldn’t yet admit an insurrection against the US-led occupation was already underway (we all remember Rumsfeld’s “dead enders”) from the war’s inception, it was pretty obvious walking around Baghdad that things were going to get ugly and fast. Here, I found the upside down chassis of a what appeared to be a car bomb. As I quietly photographed this wreckage atop a traffic median, there was an explosion off in the distance indicated by the rising black plume. ©2003 Derek Henry Flood 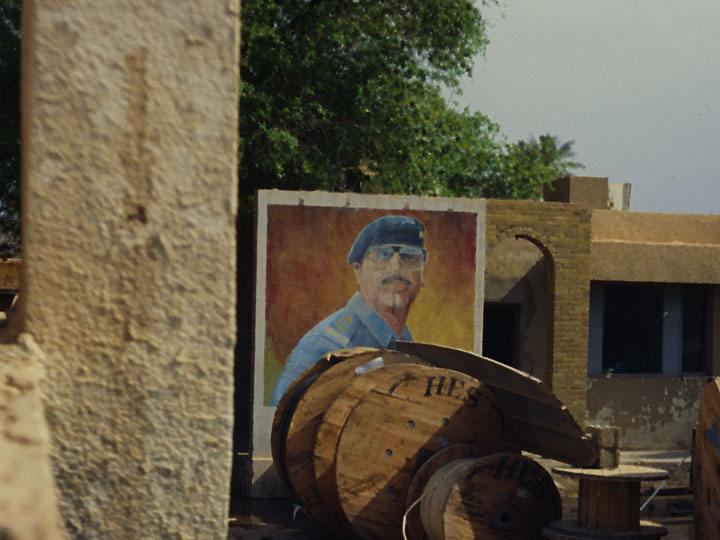 I walked all over the Iraqi capital one day looking for a still intact mural of President Saddam Hussein that hadn’t been trashed by the Americans or joyous opponents of his wing of the Ba’ath Party. I managed to find this one in a deserted lot littered with construction equipment. One thing that has always fascinated me about dictatorial regimes is the sheer level of ubiquitousness of ‘big man’ iconography. ©2003 Derek Henry Flood

Though at the time of this posting Fallujah remains under rebel control in a shaky truce mediated by the Anbar Provincial Council, in my view things aren’t likely to improve overnight in terms of Anbar’s overall security in the lead-up this spring’s election.

← Libya- Looking Back on Revolution 2011
The Novye War for Crimea →