A balmy spring evening on the terrace at the UN. It was a bit of world’s colliding eating khatchapuri, listening to people speaking kartuli, but while looking at the lights of Long Island City rather than walking down Leselidze Street in Tbilisi. ©2014 Derek Henry Flood

New York- I attended a Georgian diplomatic party marking the restoration of Georgian independence this week hosted by Ambassador Kaha Imnadze. Georgia was briefly independent from 1918-1921 following the 1917 Bolshevik revolution and the collapse of the Romanov dynasty. The Menshevik-led Democratic Republic of Georgia was ultimately subsumed into the Soviet Union as neighboring Armenia and Azerbaijan became Soviet Socialist Republics and the Ottoman Empire crumbled giving rise to pragmatic Kemalism.

With badrijani and lobiani wafting through the air (unfortunately there was Pellegrino rather then Borjomi) and interesting discussions being had on the geopolitical primacy of the greater Black Sea region made for an interesting evening. 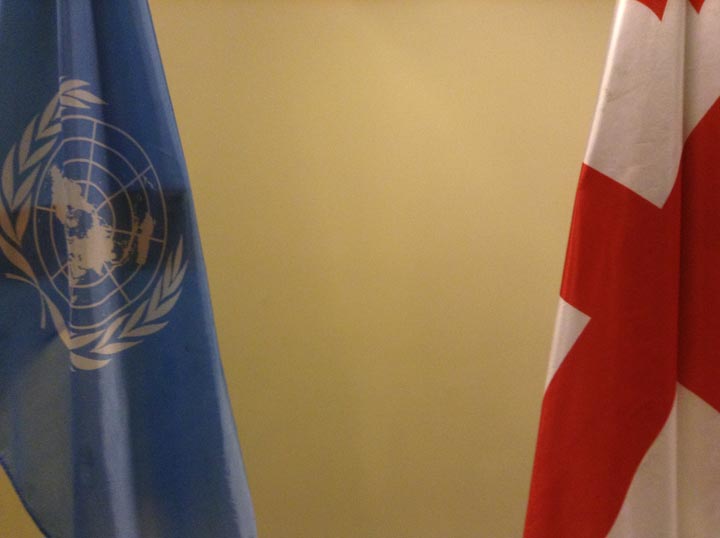 A portrait of former Secretary-General and elder Ghanian statesman Kofi Annan hanging in the lobby of the United Nations headquarters situated along Manhattan’s East River. Hailing from an aristocratic background in what was then the Gold Coast, the Annan era at the UN encompassed my coming of age in the world of international affairs. ©2014 Derek Henry Flood

← Renewed Conflict in Libya
Beyond Polemics →