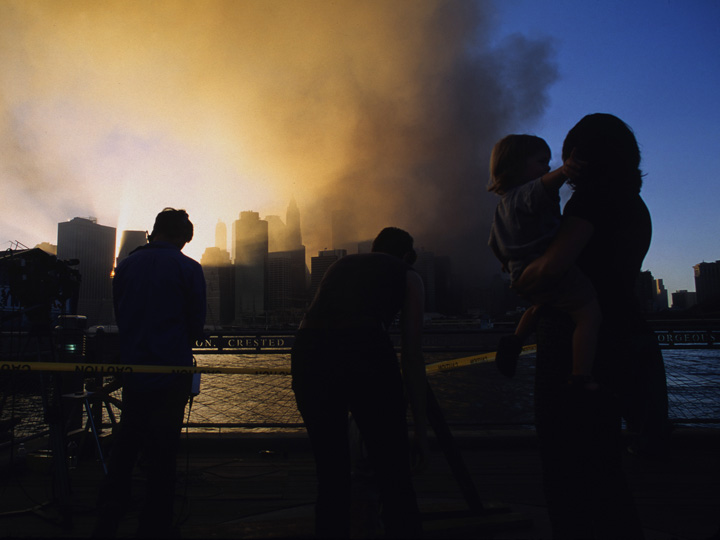 A mother holds her daughter while gazing at the plume in the aftermath of the destruction of the World Trade Center on 9/11. To their left a TV crew prepares for a live broadcast. This never before seen image was made adjacent the River Cafe on Brooklyn’s DUMBO waterfront at approximately 8pm after the suicide attacks killed nearly 3000. ©2001 Derek Henry Flood

Barcelona- Today is just another 9/11 anniversary it seems. On twitter, everyone is consumed by Obama’s speech last night vowing to “destroy” the so-called caliphate of the Islamic State in Iraq and Syria. The brutality of al-Qaeda has been rhetorically lessened with foolish tracts saying that Ayman al-Zawahiri disowned Abu Bakr al-Baghdadi’s movement because AQ 1.0 was put off by IS’s even harsher methods as if there has been a collective forgetting of what al-Qaeda and its allies have done over the years. This is an absurd assertion.

The split is based more on divisive interpretations of salafi ideology, a supreme contest of egos within a very violent subculture, and plain envy. Bin Laden was not primarily a takfiri (one who maintains the authority to declare lesser Muslims or minorities within its reach ‘apostates’) but in his alliance with the Deobandi Taliban he was simultaneously focused on both the near and far enemies. Baghdadi has thus far been more narrowly focused in constructing his personality cult whereby the desired targets of IS’s aggression are the Shia and other related sects and those affiliated with regional regimes they deem worthy of death. To say one group is more ‘brutal’ than the other is a futile comparison. It is far more about the ebb and flow on the centers of power within trends in global militancy than a zero sum game.

Here in Barcelona, it’s Onze de Setembre (National Day of Catalonia), a celebration of Catalan martyrdom that is experienced as hyper localized nationalism. Drums beat, scooters beep and a rivalry in the heart of the first world rages on.

For a solid decade I would return from wherever I was in the world to New York to document the goings on at the World Trade Center which for many years was referred to simply as ‘Ground Zero.’ For all of the anniversaries I attended in order to document, I did so without accreditation except for the final one–the 10th–when I applied for permission from the Bloomberg administration to photograph the two visiting presidents. That last few years since the 2011 shoot, I haven’t returned to the World Trade Center.

Yesterday here in Catalunya it was in fact the furthest thing from my mind as I hung out with friends at the beach in Barceloneta. Nor did I think about the assassination of Ahmad Shah Massoud either. Things that I have felt and witnessed and people I once knew who have died have since been enveloped into history as once so viscerally palpable anniversaries have often morphed into more ordinary days as the healing current of time passes by.

People observe a moment of silence in Zuccotti Park in remembrance of the 5 year anniversary of the 9/11 terror attacks at the former site of the World Trade Center in Manhattan. ©2006 Derek Henry Flood

But for the people directly affected, is today’s 13th anniversary any less significant than the 1st back in 2002, the 5th in 2006 or the 10th in 2011?  History as we live it is a living, breathing organism. Time never does stand still. I may be in the fever of minority linguistic politics here along the western Mediterranean as if Franco died yesterday but I cannot escape the track in which the events that day 13 years ago defined the course of my adult life. Though I no longer rush back to New York to document the day, it will forever remain in my aching heart.

A giant projection outside the WTC memorial shows family members reciting the names of the nearly 3000 killed on 9/11. President Barack Obama, Michelle Obama, George W. Bush, and Laura Bush, look on behind bullet-proof glass as families of the victims speak from a podium. ©2011 Derek Henry Flood

← Peace In Light of War
Santoriniana →