Paros- Four years ago today I finished this decade-long documentary project about what was then called ground Zero in lower Manhattan. When 9/11 took place in my city, I told myself I would follow the story wherever I could for as long as I could. It took me to Tajikistan, Afghanistan, Turkmenistan, Hamburg, the Republic of Georgia, Jordan, Iraq, Bangkok, Malaysia, and countless other locales as the “War on Terror” unfolded. I then kept returning to New York City, my home, for each subsequent anniversary.

Ground Zero is now the site of One World Trade Center, a hub for New York City’s tourism industry. The city has been rebuilt where it was thrashed by the largest suicide attack in history. Ground Zero buzzes with curious visitors posting the requisite photos to social media but the memory lays there, heaving with silent grief underneath flowing water and cool black stone.

9/11 unequivocally changed our world. We are living in a less safe, less just world today in my judgement. Freedoms have been curtailed as the United States has evolved into a low key surveillance state in response. Afghanistan is still in a state of war. Iraq has been broken likely irreparably. Then the ‘Arab Spring’ happened. It resulted not in a well spring of democratic growth as many initially hoped but inadvertently acted as an enabling factor for the spread of cancerous salafi-jihadi ideology to the point of holding territory by the most vile of non-state actors.

9/11 must be remembered with calm dignity, not be opportunistically exploited with jingoism or crass populism. A vigil of the spirit. 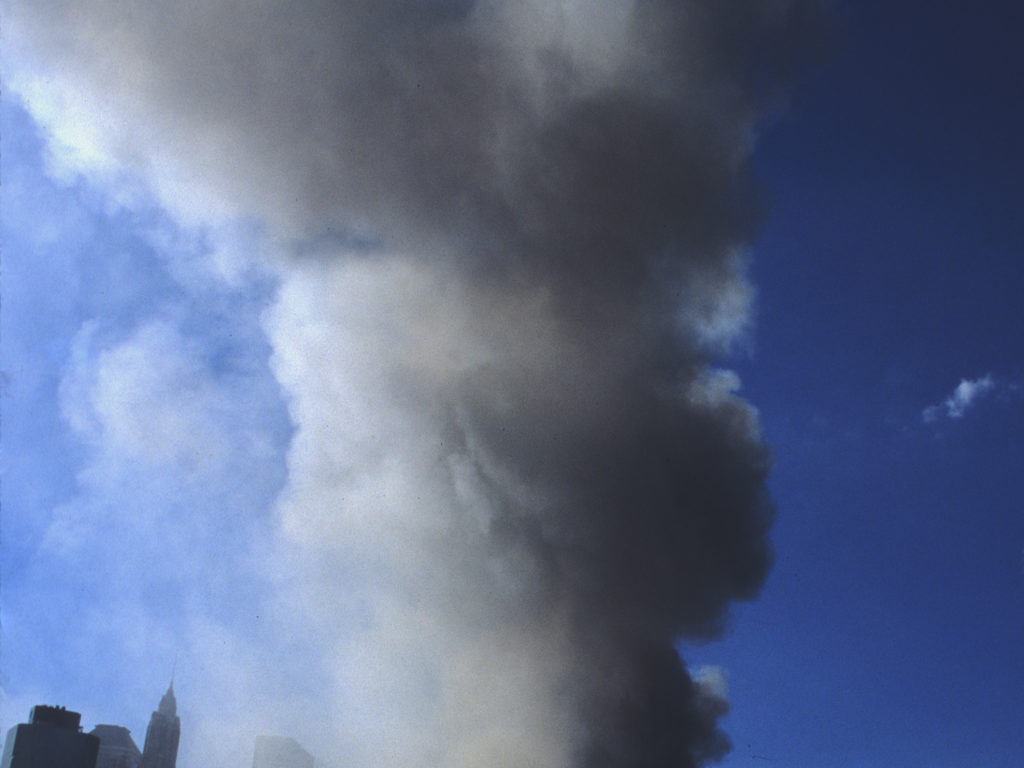 A ghastly toxic plume of smoke and ash rises above Ground Zero after the total collapse of the North and South Towers of New York’s World Trade Center on 9/11. ©2001 Derek Henry Flood 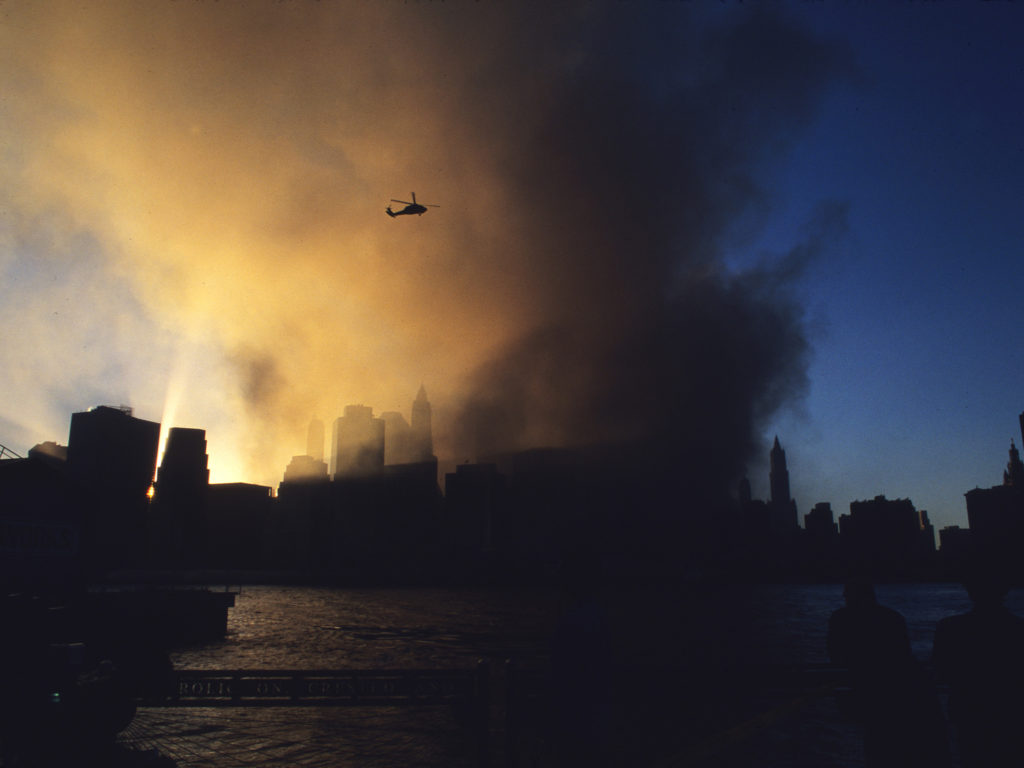 A Blackhawk helicopter flys above the plume surveying the destruction of the World Trade Center on 9/11. This never before seen image was made adjacent the River Cafe on Brooklyn’s DUMBO waterfront at approximately 8pm after the suicide attacks killed nearly 3000. ©2001 Derek Henry Flood 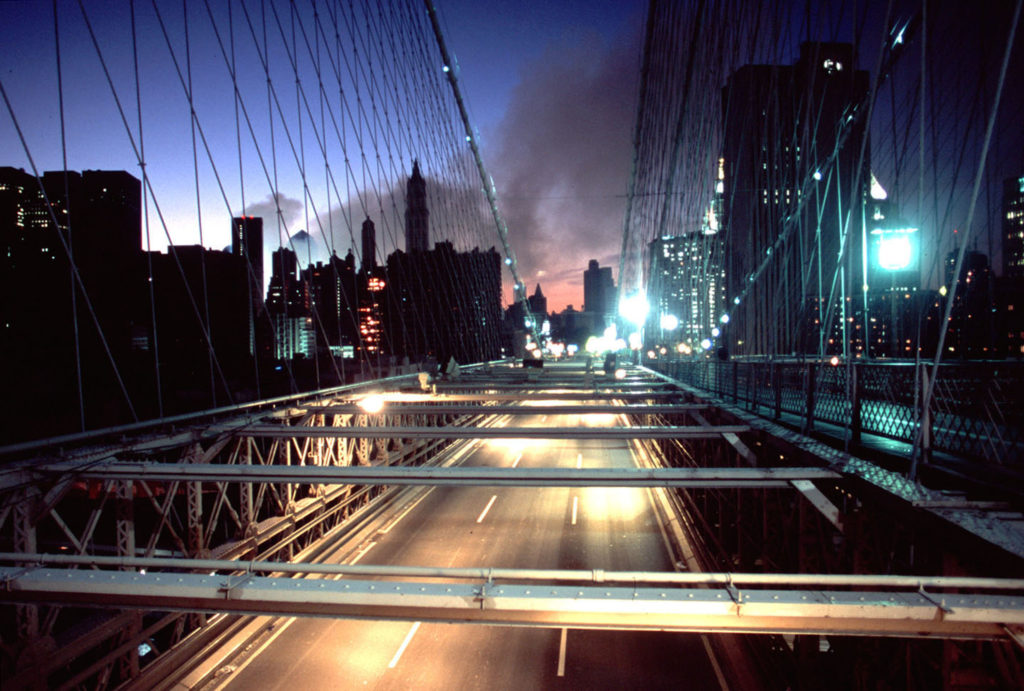 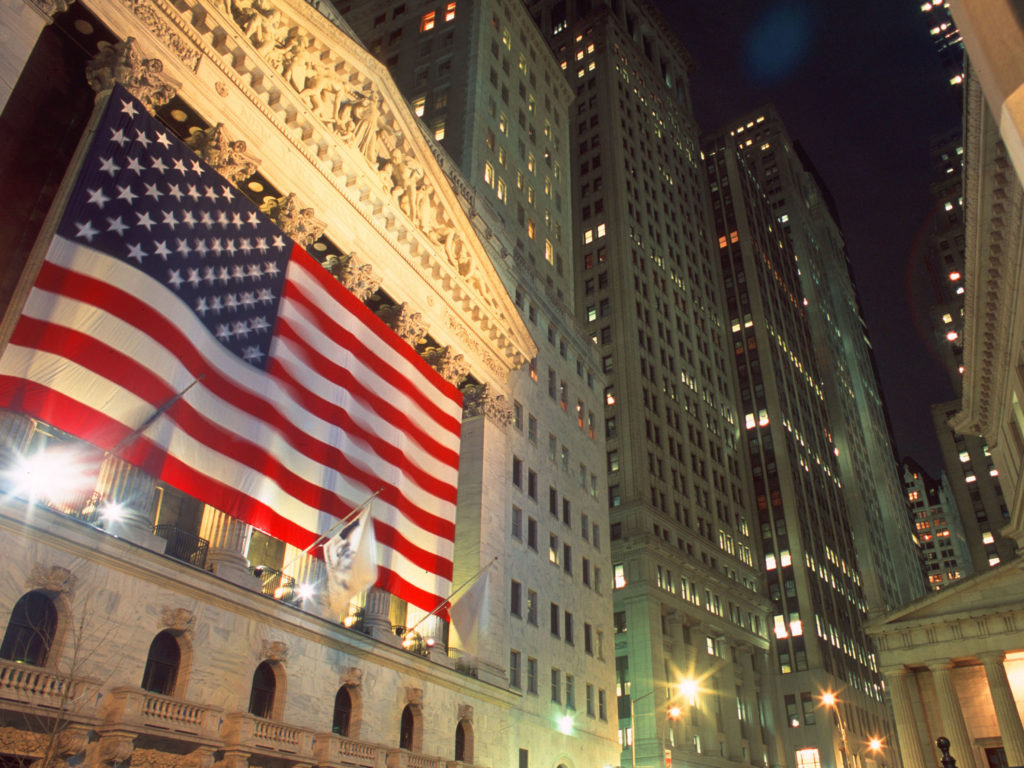 On the six month anniversary of 9/11 the New York Stock Exchange is draped in a massive American flag. ©2002 Derek Henry Flood 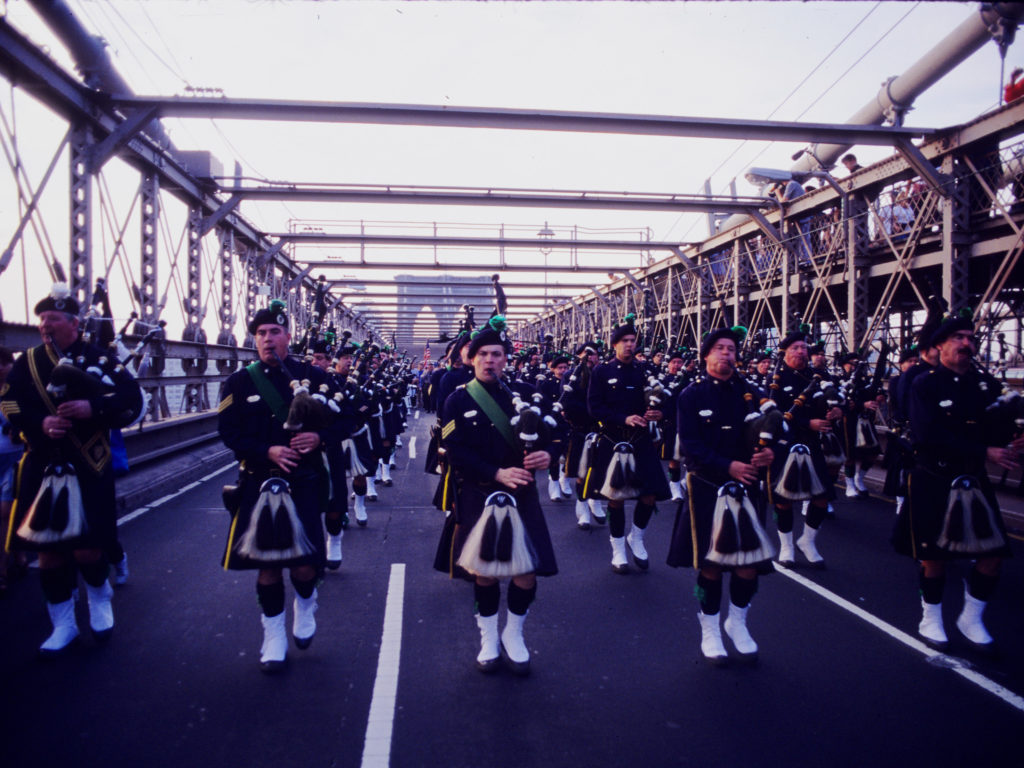 The New York City police department bagpipe troupe marches over the Brooklyn Bridge at dawn on the one year anniversary of 9/11. ©2002 Derek Henry Flood 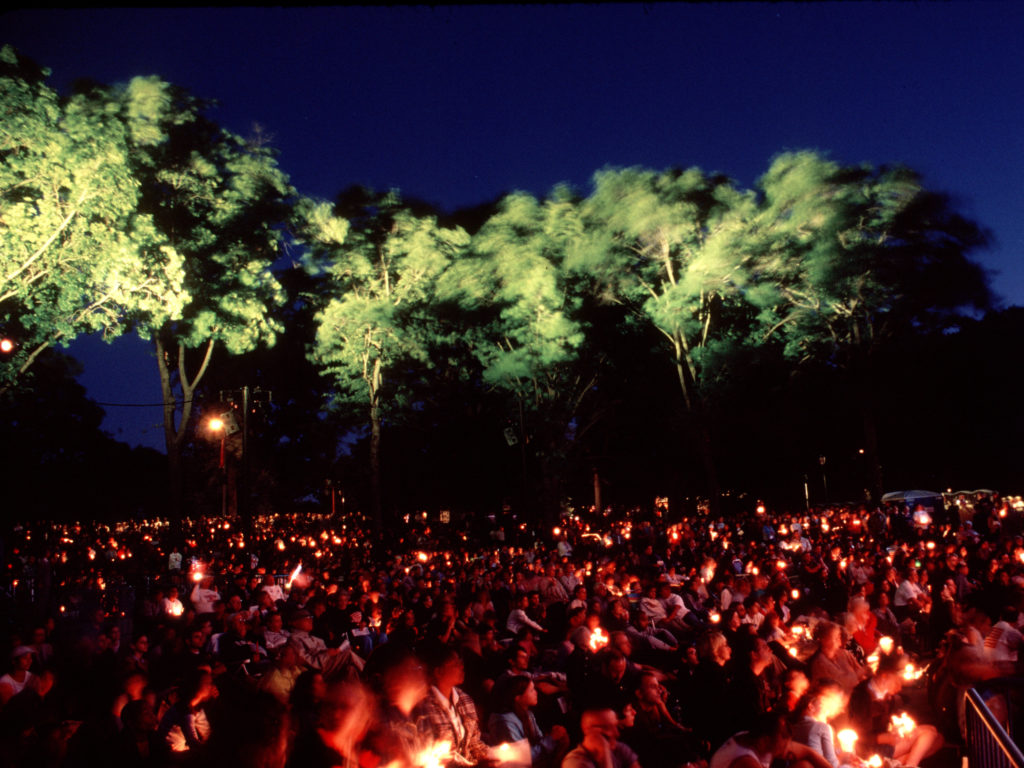 A candlelight vigil was held in Brooklyn’s Prospect Park on the evening of September 11, 2002 to commemorate the one-year anniversary of the suicide attacks that shook New York City to its core the previous year. ©2002 Derek Henry Flood 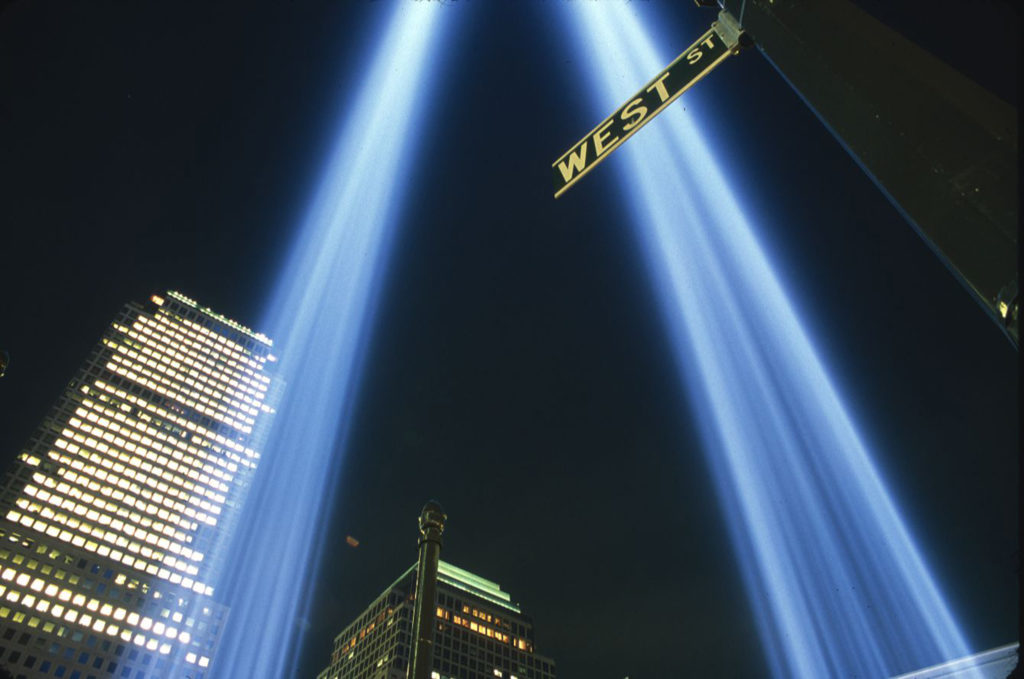 Despite conspiracy theories to the contrary, most of New York’s ethnic and religious communities were affected by 9/11. Here a pair of Hasidic men attand the ceremony held for the second anniversary of 9/11. ©2003 Derek Henry Flood 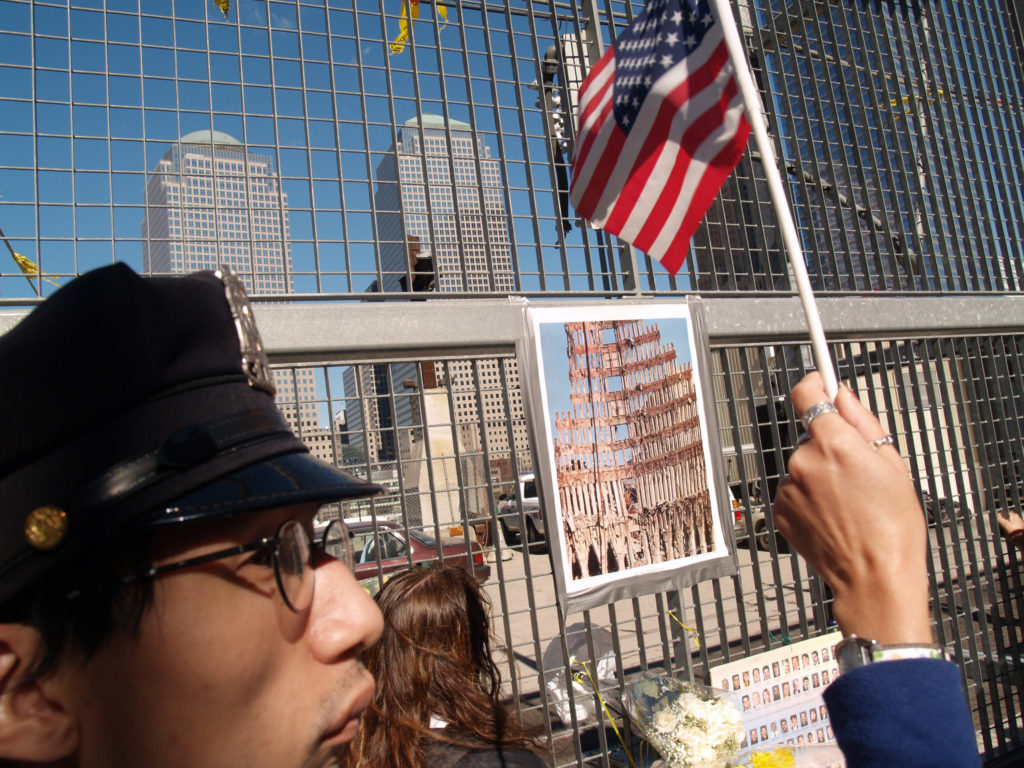 People gather in remembrance of the 5 year anniversary of the 9/11 terror attacks at the former site of the World Trade Center in Manhattan. ©2006 Derek Henry Flood 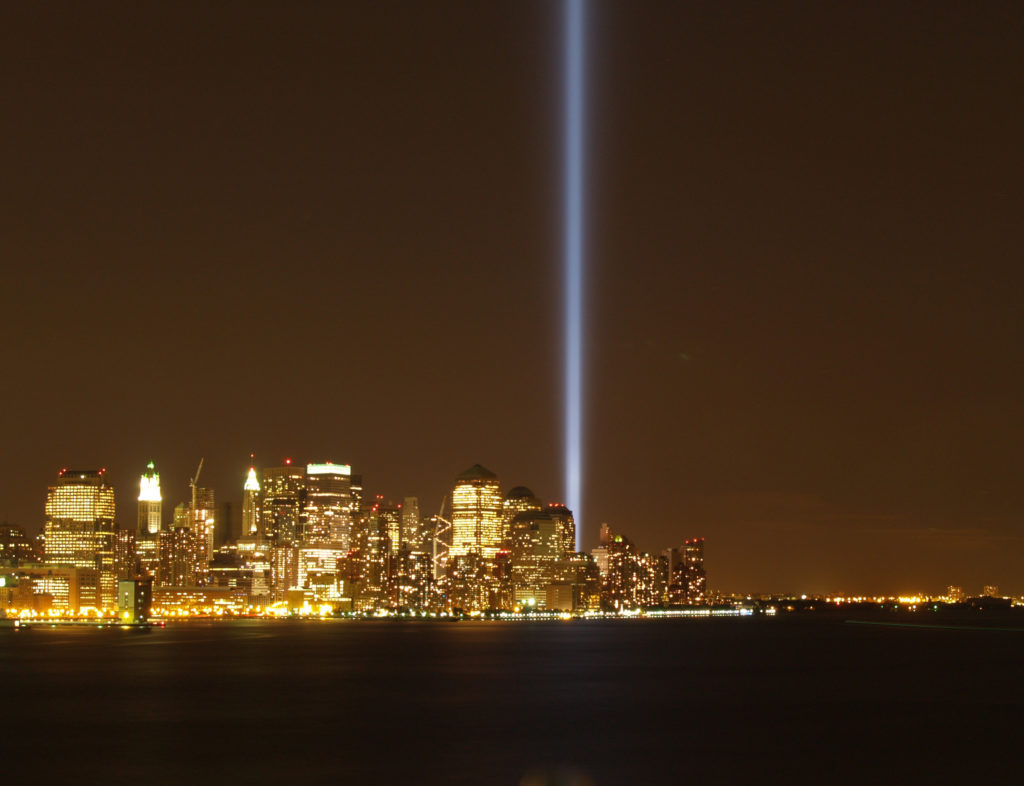 The Towers of Light as photographed from across the Hudson River in New Jersey on the 5th year anniversary of 9/11. ©2006 Derek Henry Flood 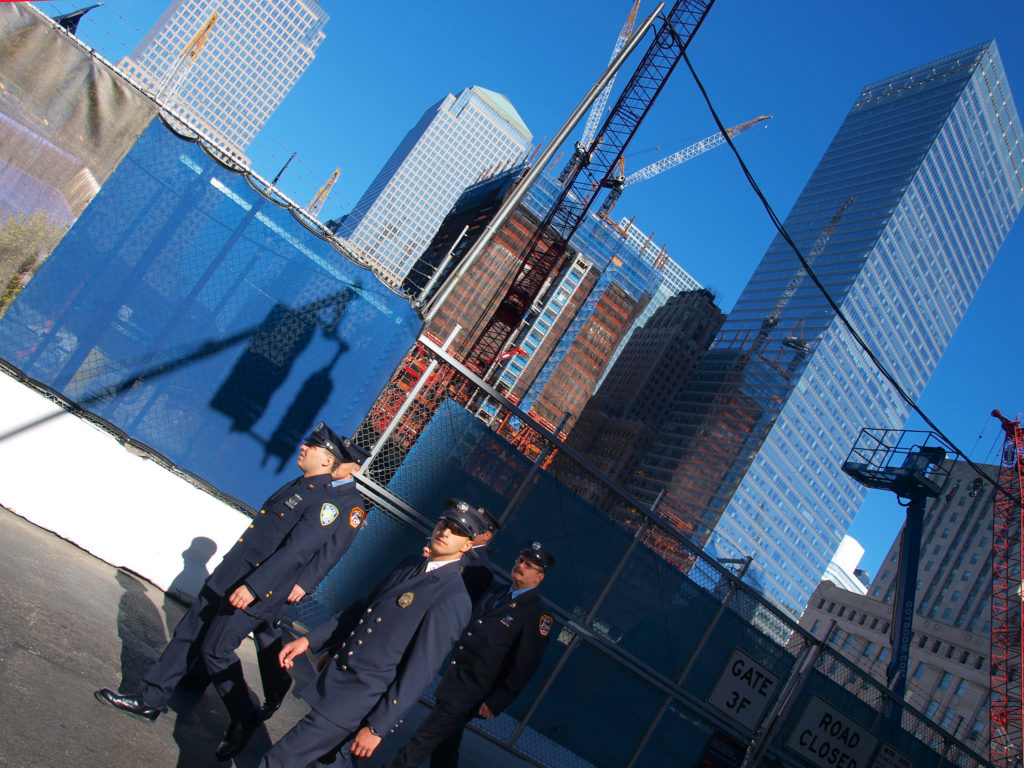 A group of New York City firefighters pass by a Ground Zero outside the annual memorial ceremony on the ninth anniversary of the 9/11 terror attacks in lower Manhattan with the construction of a new tower finally begginning to arise from the void in the background. ©2010 Derek Henry Flood 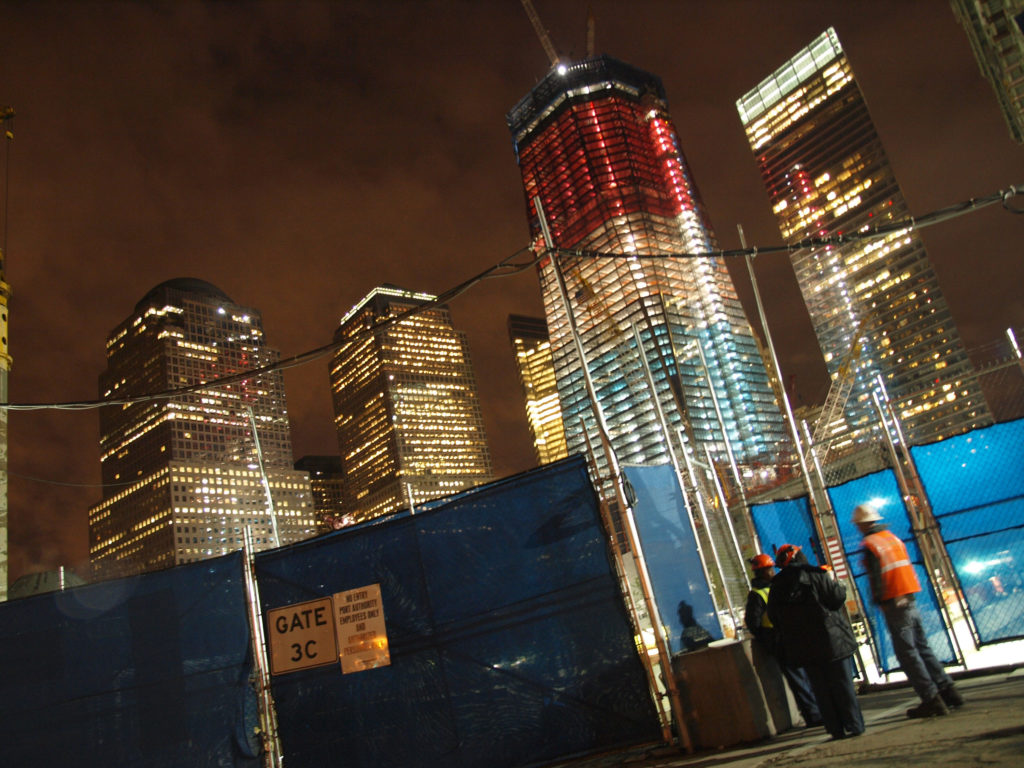 Following the killing of Osama bin Laden the partially built new World Trade Center tower is lit up in the colors of the American flag. The lighting was prepared in advance of President Barack Obama’s visit to Ground Zero to lay a wreath the following morning in remembrance of the nearly 3000 killed on 9/11. ©2011 Derek henry Flood 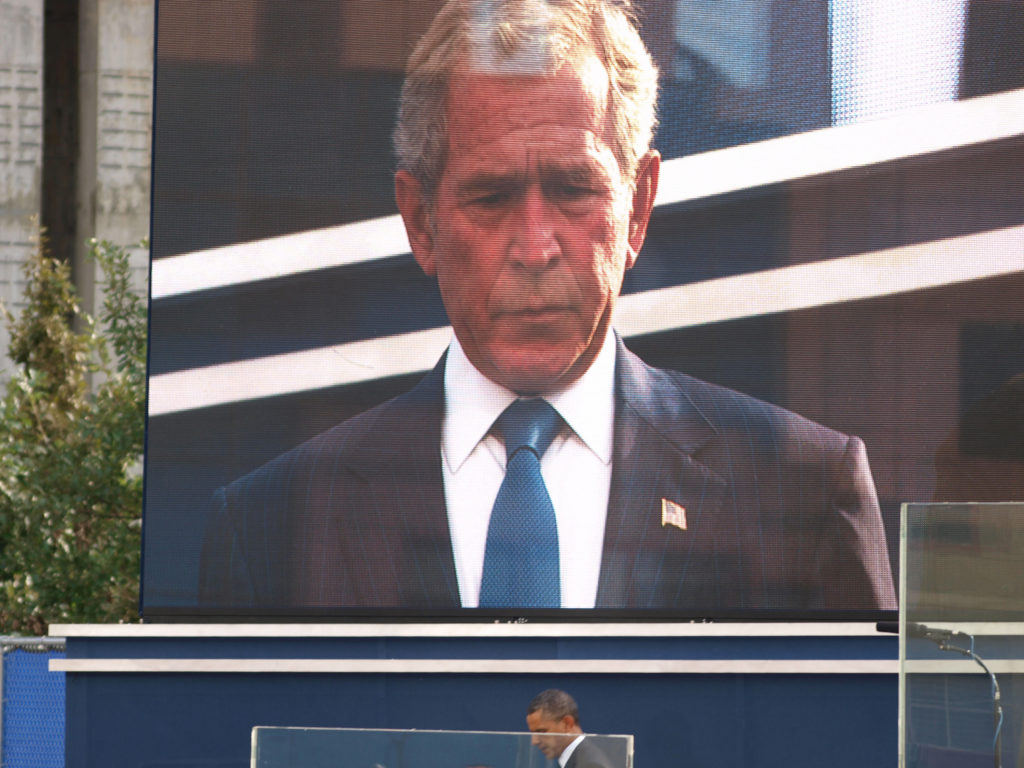 President Barack Obama exits the stage after giving an impassioned speech for the families of victims at the ceremony in Lower Manhattan to mark the 10th anniversary of 9/11. A sorrowful George W. Bush stands on the overhead screen. While the Obamas remained composed throughout the ceremony the Bush’s displayed visible signs of emotion as the events of 9/11 were collectively remembered. ©2011 Derek Henry Flood 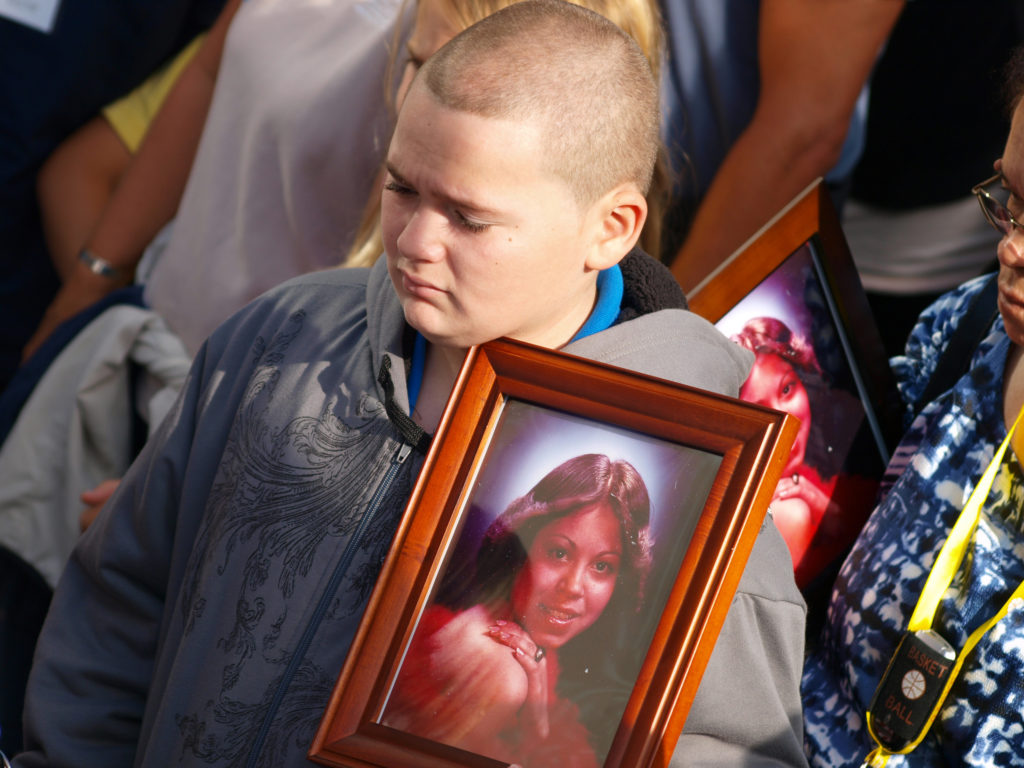 Families arrive en masse to the site of the former World Trade Center to grieve once more for the 10th anniversary of the 9/11 terrorist attacks. The attacks claimed victims from across New York’s incredibly diverse ethnic and religious communities. Here an Latino family grieves for a lost member. ©2011 Derek Henry Flood

← Afghanistan-Where It All Began
Troubled Waters →