A headless statue of the late Iraqi president Saddam Hussein in central Baghdad 15 years ago. If the neoconservative war planners’ goal was “regime decapitation,” in this case it was interpreted literally by beheading a statue atop its shiny plinth. ©2003 Derek Henry Flood

Erbil- I arrived back in Iraq for the sixth time since the American-led invasion that commenced fifteen years ago (a month from now give or take). On 20 March 2003 Baghdad time, the ground forces of the United States, United Kingdom, Australia and Poland, along the royal navy of the Kingdom of Denmark (with possibly a small contingent of special operations forces). This country has been in some form of chaos ever since. While many areas are comparatively stable as here in the Kurdistan Regional Government’s administrative seat, or the oil port of Basra far to the south, even these areas are built upon a shaky political modus vivendi that guarantees no future stability without some for of genuine communal reconciliation.

We are now living in the era of the so-called ‘terror wars,’ a time of perpetual terror and spreading instability. Though our world is oft said to be in a steady decline of conventional warfare since the conclusion of the second world war in terms of both breadth and the geographic distribution of conflict, that academic sentiment holds little if any water to the people of this region. From Operation Desert Shield to Desert Storm to Desert Fox to Iraqi Freedom to New Dawn to Inherent Resolve,* much of what Iraqis (and now Syrians) know about American power is through the blunt force of orchestrated, highly mechanized violence.

*Note: Coalition partner code names may, and often do, differ.

Here we are in early 2018 and it has been reported that American troops in Iraq are to begin a gradual force drawdown after Iraqi Prime Minister Haider al-abadi declared a total victory over IS…in terms of territoriality anyway. But note that a drawdown is not a withdrawal and that it may purportedly, quietly signal a troop build up in Afghanistan where the Taliban are gaining territorial control replete with shadow governance. And unlike October 2001, IS has a serious presence there now presenting themselves as a more fundamental movement in terms of Sunni salafi jurisprudence as opposed to the traditional Deobandi strain of Taliban ideology with its local South Asian characteristics. In short, the fight in Afghanistan has intensified in terms of its non-state actor complexity.

Iraq is as fractious and fluid as a nation-state can be. In the wake of the IS defeat in Ninewa, al-Anbar, and Kirkuk governorates in particular, nothing in terms of the country’s territorial integrity has been resolved nor has the insurgency been completely defeated by any means. There are still IS remnants in and around the Hamrin mountain range and there is talk, albeit somewhat unsubstantiated at the time of this writing, of a group of disgruntled Kurdish nationalists calling themselves the ‘White Flags’ or ‘White Banners’ operating on the outskirts of Tuz Khurmatu in perennially troubled Salah ad-Din governorate south of here. 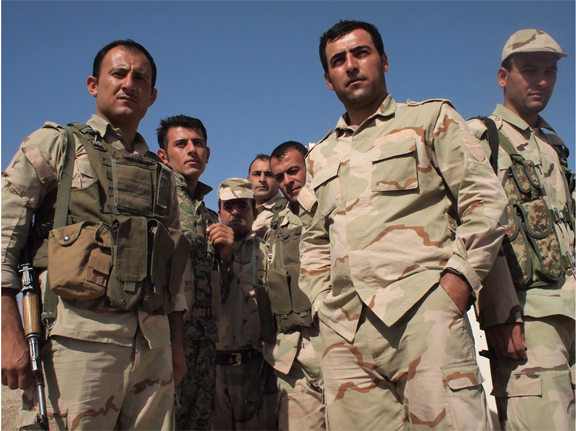 Kurdistan Democratic Party-aligned Peshmerga in one of the ‘Disputed Territories,’ Dibis district, Kirkuk governorate, five years back. While facing off a multitude of Sunni and nominally Sufi insurgents, they were also facing off the forces of the central government. ©2013 Derek Henry Flood

In Iraq, and now neighbouring Syria, the end of one war merely often only signifies the start of the next. This is due in large part to indigenous political elites pandering only to their power base while never genuinely mediating, much less resolving, core ethno-sectarian fissures coupled with Western policy makers having only a primordial understanding of.

The terror wars expand and contract but they do not end. There is no end game, no coherent strategy. And there never was. 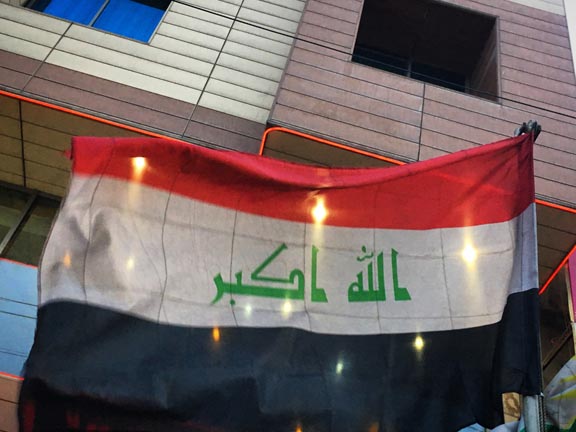 The Iraqi flag flowing in Erbil fifteen years after the latest stage in the war here began (and then morphed). ©2018 Derek Henry Flood

← Along the Bosphorus
In the Disputed Zone →