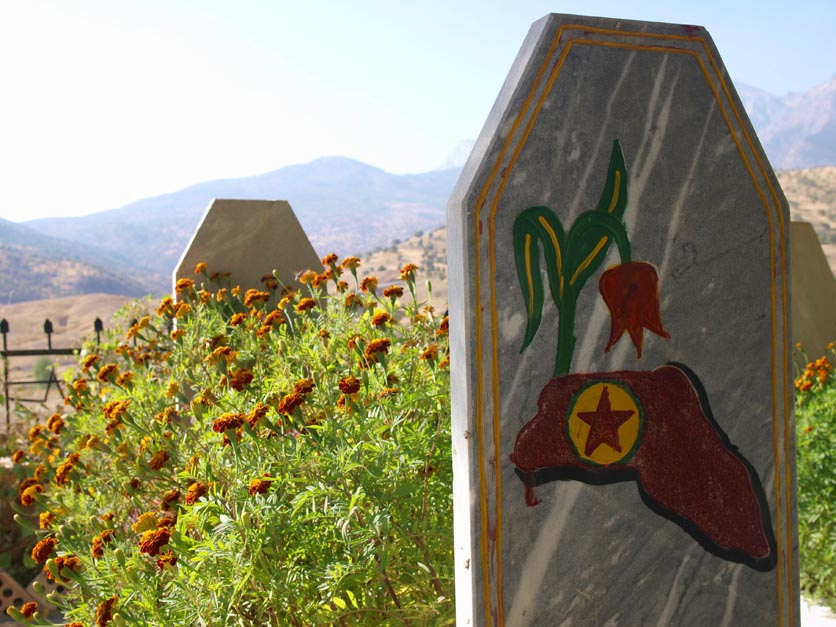 A joint PKK/PJAK martyrs graveyard in the Qandil region along the Iraq-Iran border. ©2009 Derek Henry Flood

Mardin, Turkey- After a long two weeks in Iraq, I’ve returned to northern Kurdistan a.k.a. southeast Turkey. I wasn’t able to update the site much while in Iraq as the poorly named Hawler Palace Hotel did not have an internet connection. I finally after much networking and sweating it out in said depressing hotel room was able to meet members of the Partiya Jiyana Azad a Kurdistanê (PJAK), Iran’s counterpart to the Partiya Karkerên Kurdistan (PKK)in Turkey. While the PKK may describe itself as a Kurdish national liberation movement, the PJAK considers itself an armed democratization movement. Many skeptical media accounts describe the PJAK as nothing more than an “offshoot” of the PKK but from the standpoint of the PJAK, this is simply the work of state propaganda meant to divert attention away from the Islamic Republic of Iran’s own internal “Kurdish Question.” Roj, a Kurd originally from Turkey, was a representative of the Koma Civakên Kurdistan (KCK-a Kurdish rebel umbrella congress that includes the PKK and PJAK) who had lived in the West at some stage, mentioned the concept of the “Deep State” in reference to Kurdish oppression while interpreting for me with a PJAK commander. The idea of the Deep State, which may be the Middle East’s penultimate conspiracy theory, stems from an idea that no matter how far democracy advances within Turkish society, there will always be a hidden, radical Kemalist agenda that will steer the country away from ultimate freedom to dissent. The Deep State is a highly cynical concept in and of itself an is seen often as anti-Kurdish by those affected by Ankara’s pogroms in the 1980’s and 1990’s during violent uprisings in Turkish-controlled Kurdistan. The Treaty of Sèvres was meant to implement a Kurdish state in the northern Middle East (though not to include all of “greater” Kurdistan) two years after hostilities concluded in the Great War (WWI). “Ataturk” Mustafa Kemal, a brilliant German-allied Ottoman military commander turned Turkish nationalist politician, founded the Republic of Turkey three years after Sèvres in 1923. With the abolishment of the Ottoman caliphate, Ataturk was under no obligation whatsoever to grant the Kurds an independent state. As the crumbling empire was partitioned, the Kurds were left in the cold and Sèvres was replaced by the Treaty of Lausanne. The rest, rather than being history, is in fact the very volatile present. The de facto state held by the Kurdistan Regional Government (KRG) in Iraq confounds Ankara. On one hand, Turkey profits greatly from the massive influx of goods and services in northern Iraq. As much as the Turkish parliament rejected Colin Powell’s advances during the first wildly disastrous Bush term, Turkey stood to profit greatly from such an American misadventure in the Middle East. One only has to see the queue of hulking Turkish trucks headed into Iraq at a border open 24-hours a day to get a glimpse of how much the political limbo in which the KRG exists greatly benefits Turkey. 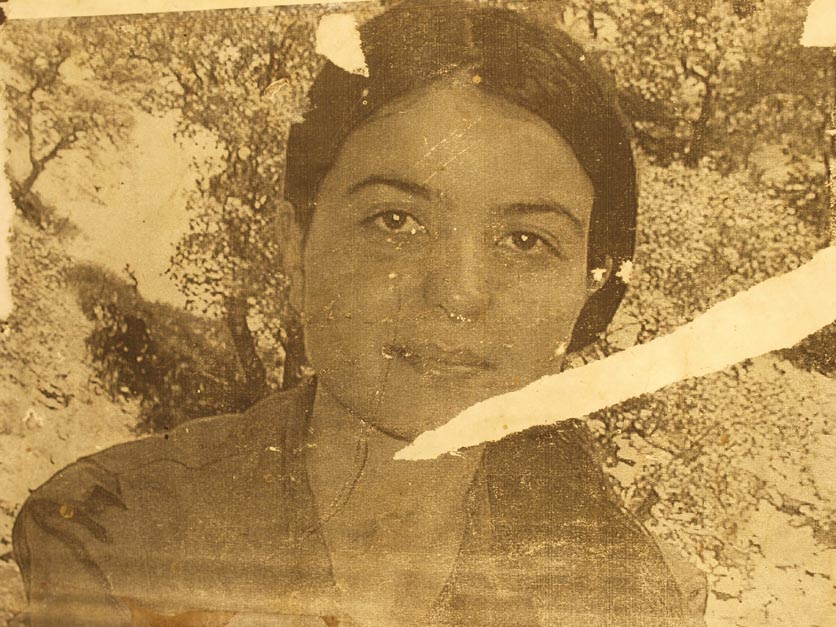 A dated photo of a female shaheed, or martyr, at the PKK cemetary. Roj informed me that this woman was actually an ethnic Turk fighting against her own ethno-nationalist government. ©2009 Derek Henry Flood

On the other, if the KRG were to eventually form the basis for a sovereign Kurdish state, many in Turkey fear that the Turkish “Deep State” (if such a nebulous concept in fact exists) would be forced to act in a way that can’t yet be foretold. Some observers believe that Iraq’s January 2010 General Elections may pave the way for Joseph Biden’s poorly thought out “Soft Partition” of Iraq and the eventual formal secession of the three KRG-held governorates. However, the creation of a landlocked Kurdish state in northern Iraq poses a problem for groups like the PKK and PJAK that may believe the KRG would have to sell them out in order to survive amongst neighbors hostile to the idea of a State of Kurdistan as a geopolitical reality.

The latest empire to roll through the region is none other than the United States. The problem for the Americans is that they are neither from the region, nor are they soldier-scholars (with a few notable exceptions). Upon entering Zakho, the frontier town in the KRG’s Duhok Governorate, next to the taxi stand while waiting for a car to fill up sufficiently to ride to Erbil. I spotted a Rhino Runner armored bus in an adjacent lot like the one I saw in Kabul’s Green Zone in August but dared not photograph. Behind the Rhino where a huge column of Mine Resistant Ambush Protected (MRAP) vehicles which I couldn’t tell whether they were headed into or out of Iraq. Two weeks later on the way out, to drive from Erbil to Zakho, the taxis pass through a contested, apocalyptic string of mixed Arab and Kurdish villages in Ninewa Governorate on Iraq’s ethnic fault line. A foreboding sandstorm began to whip up into a blinding fury all around us and suddenly we were in a traffic jam as a convoy of the above mentioned MRAPs bulldozed their way through traffic with the lead vehicle announcing “Get out of the way or I will shoot you. Repeat: I will shoot you.” The three Kurdish men in the taxi, having no clue what the man in the lead car in the convoy was saying, looked at me as if for some kind of commentary on seeing my own countrymen in one of Iraq’s deadliest areas. “Jaish-e-Amriki” (American soldiers) I said dryly in Arabic. Perhaps the MRAPs were being delivered to Mosul, I can’t be sure. I find it fascinating seeing these massive occupations through civilian eyes, which is the only way I see them since I deplore the notion of embedding. I had the same experience in Kabul recently when I saw MRAPs plowing through Shahr-e-Naw, snarling traffic for miles. After we left dry, trash strewn, suicide bombed Ninewa, we enter the rainy, rolling hills of Duhok with it’s freshly paved roads, trash collection and undulating calm. It was as if Mosul was a world away. 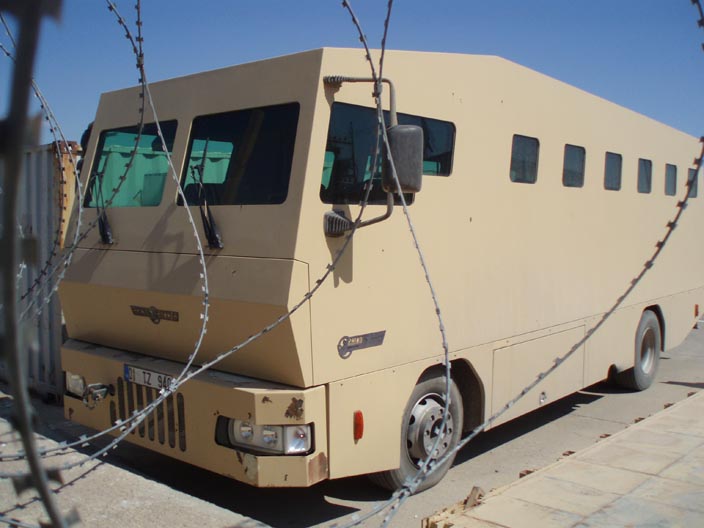 A Rhino Runner bus parked quietly on the Turkish-Iraqi border. Note the Turkish license plate. Was this the one that brought Saddam Huseein to the gallows or a khaki-booted Don Rumsfeld on a tour of the Green Zone? ©2009 Derek Henry Flood

← Changing the Status Quo in Kurdistan
Georgia on My Mind →