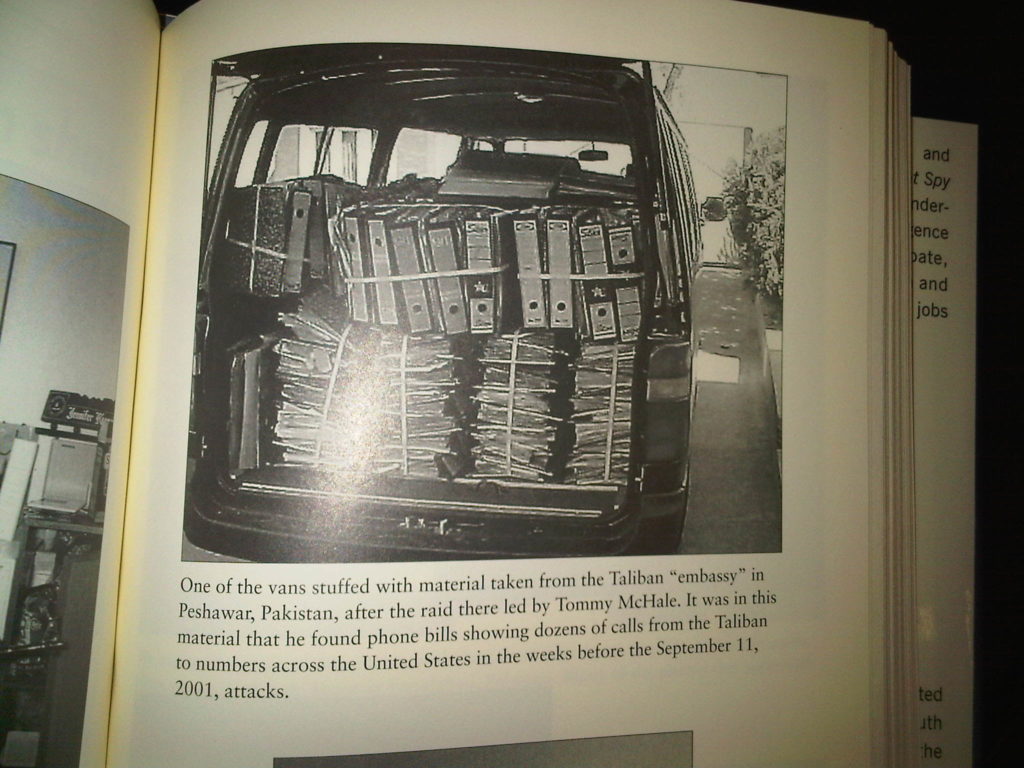 A photo from John Kiriakou's The Reluctant Spy showing the theft of diplomatic documents by American agents in Peshawar, Pakistan in early 2002. My Afghan visa application is somewhere in there.

New York- In October of 2004, I received a strange call from an FBI agent at their Manhattan headquarters named Teresa Meehan. Agent Meehan has apparently been tailing me and clipped her business card to a piece of my mail in Brooklyn at the time to let me know she was on the case. What case that was, I had no idea at the time.

The other week I was browsing the new non-fiction releases at the Union Square Barnes & Noble and I picked what looked like another ex-CIA tell all. The Reluctant Spy by former Agency man John Kiriakou caught my attention for some reason and I started flipping through it looking for nuggets until I saw a strange photo in the center. I was of a van packed with files in Peshawar, Pakistan in February of March of 2002 claiming to be from the “Taliban Embassy” (actually the Afghan consulate but I won’t split hairs). It looks like I finally got my answer to how agent Meehan was trying to find me five and a half years back. Of course then I had to skim the entire book to find the corresponding entry. According to Kiriakou, an enterprising NY/NJ Port Authority Detective named Thomas “Tommy” McHale who was, for some reason, working for the FBI in Pakistan after 9/11, asked permission from the Pakistan authorities to break into the building under the cover of night and abscond with everything inside which must’ve included my application for an Afghan tourist visa in November of 2000. The documents were brought to Islamabad and then flown to the Washington area where they were not examined until the spring of 2004 (which would explain the gap in time I had been trying to figure out) because bureaucrats claimed they did not have people to translate the documents (though many innocent visa applications like mine and my accompanying Swiss backpacker friend were obviously in English) from Pashto and Dari into English which is apparently the sole language U.S. government officials are capable of reading. Kiriakou says the documents sit today in a warehouse in suburban Maryland like the Ark of the Covenant at the end of Raiders of the Lost Ark, never to be reexamined.

When I was called by agent Meehan, she asked me, preposterously, if I had ever attended a terrorist training camp in Afghanistan. I practically laughed her off the phone back in October of 2004, imagining her sitting in her cubicle in lower Manhattan with a grimacing, simplistic picture of George Walker Bush somewhere in the vicinity. Then I quickly reflected on how pathetic it was that my government could be this bumbling. While staying in Lahore in March 2007, I took a quick side trip to Peshawar and barged into the Afghan consulate there to interview the sitting Consul General. I was told the Consul was busy and was pointed in the direction of the office of the Vice Consul. He was a youngish Tajik that claimed he had no answers for me and was incapable of speculating when asked. Kiriakou’s book seemed to answer one burning question: how long was the Peshawar Afghan consulate in control of the Taliban after they had been ejected from Kabul? I found it peculiar that no one seemed to have any clue to what I thought to be a fairly straightforward question. According to The Reluctant Spy, Agent McHale and his men broke into the compound several months after the Taliban had been overthrown and the Bonn conference had installed a new government with Hamid Karzai as its head. From the book’s description, it sounds like the place was manned by a chowkidar (caretaker) who was arrested at the time by local police for questioning. So there was definitely a period of months between the fall of the Taliban and when the post-Bonn government gained control of this ever so important consulate. Interesting…at least to me. One of the most heavily covered events, at least in terms if the sheer number of journalists on the ground at the time, and no one, including local Peshawaris, could give me an answer to this simple question. Eight years on, I think I have found most of the answer.

← Another Katyn Tragedy
From Dupont to Sana’a →