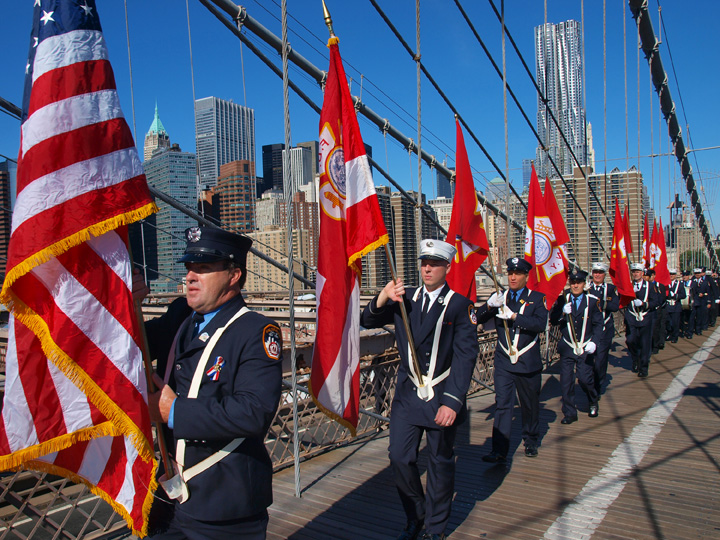 A New York City firefighter troupe marches from Ground Zero to Brooklyn across the Brooklyn Bridge on the ninth anniversary of the 9/11 terror attacks in lower Manhattan. ©2010 Derek Henry Flood

New York- After flying over 24 hours (including a brief layover in Kuwait) from Kuala Lumpur to Queens on September 10th, I wound up at Ground Zero in lower Manhattan for yet another 9/11 anniversary. As someone who documented the first anniversary of 9/11 in 2002, after investigating the lives of the Hamburg cell along the Elbe River days before, I never thought that eight years on I would be in Malaysia still investigating 9/11 days before another anniversary of a seemingly unending (yet noticeably dwindling in yearly attendance) mourning centered on the site where architect Minoru Yamasaki’s twin towers, completed in 1971 and 1972, once stood. 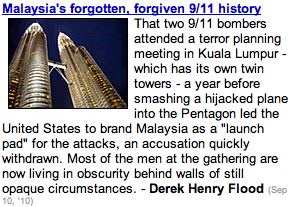 Whereas the 9/11 memorial service in the first few years was mostly a solemn occasion, now that much of the city has moved on on with itself on a day to day basis, yesterday’s events took on more of a circus atmosphere as masses of mourners have given way to kook conspiracy theorists ranting about this or that and opportunistic operators like Geert Wilders over the Netherlands’ Partij voor de Vrijheid, to make their oft obnoxious voices heard and  thugs calling themselves the “English Defence League” who looked like hooligans directing their latent rage at a religious grouping as if it were an opposing football club. Ground Zero has become a magnet for unwelcome guests to spout unlearned nonsense and well-to-do tourists in over-sized sunglasses gawking at the site as if it were a new Apple store, stomping around the city on their strong currencies on guilt-free trans-Atlantic (and now trans-Pacific) shopping sprees, the WTC just one more “must see” on a itinerary outlined in a Guide de Routard. Many of the roots of 9/11 remain shrouded in mystery and what many around the world have failed to accept is that they will remain in obscurity for perhaps the rest of our collective lifetimes. Many of those involved in the planning of 9/11 are kept out of reach by our own (the American) government or continue to successfully hide amongst tribes in Pakistan’s Federally Administered Tribal Areas. The answers are out there, but we cannot get to them. Frustrating I know, but no a reason to keep perpetuating untruths and youtube diatribes. 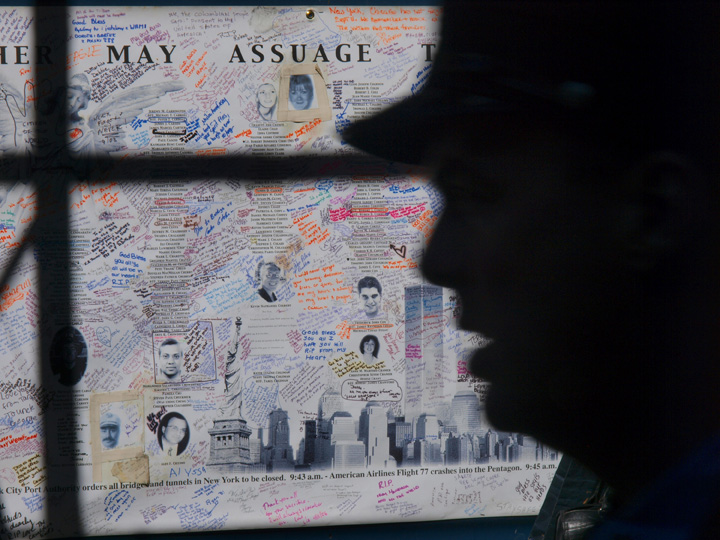 A New York City firefighter passes by a Ground Zero tribute wall outside the annual memorial ceremony on the ninth anniversary of the 9/11 terror attacks in lower Manhattan. ©2010 Derek Henry Flood