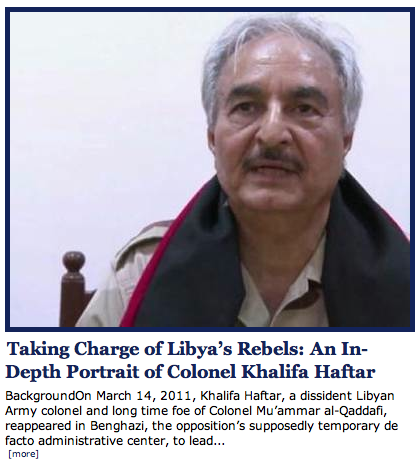 Cairo- The new issue of Militant Leadership Monitor (MLM) was released today by the Jamestown Foundation and it is our strongest issue yet.

• The MILF’s Murad Ebrahim by Zachary Abuza (which is our gratis article this month).

• The New-From Way Back-Military Commander of Libya’s Rebels, Khalifa Haftar by myself.

In other TWD news, I rode the train from Alexandria to Cairo today with a photojournalist from the EU that I’d met in Libya a few weeks back who has spent loads of time in Georgia and the rest of the Caucasus since the 1990s. I asked him what on earth ever happened to the Renny Harlin film I saw being shot in Gori in October 2009 (“Hollywood Comes to Gori”) while we were trading stories about Saakashvilli-stan. He told me that film, initially titled simply Georgia was now completed and was going to come out as Five Days of August. He described how he ended up playing himself in the film and gave me the lowdown on getting an Abkhaz ‘visa‘ and informed me that it’s possible to cross from Zugdidi to Sukhumi, something I was unaware of following the 2008 war-I thought it was probably now only possible from Sochi. He gave me some insight into director Renny Harlin’s motivation to make the film which sounded like it had something to do with growing up in Finland as a Cold War frontline state and the bitter legacy of the 1939-1940 ‘Winter War‘ between the Soviet Union and Finland. Good times. Here is the trailer:

In other utterly random Hollywood TWD crossover news, a cool Dutchman who I was hanging out with at the weird al-Wahat journo hotel in Benghazi named Harald Doorbos had a movie made about his adventures in the Balkans back in the day chasing the ghost of Radovan Karadzic called The Hunting Party that starred Richard Gere and Terrence Howard. Here is the trailer for that:

← The View From Egypt
The Sound and the Fury →