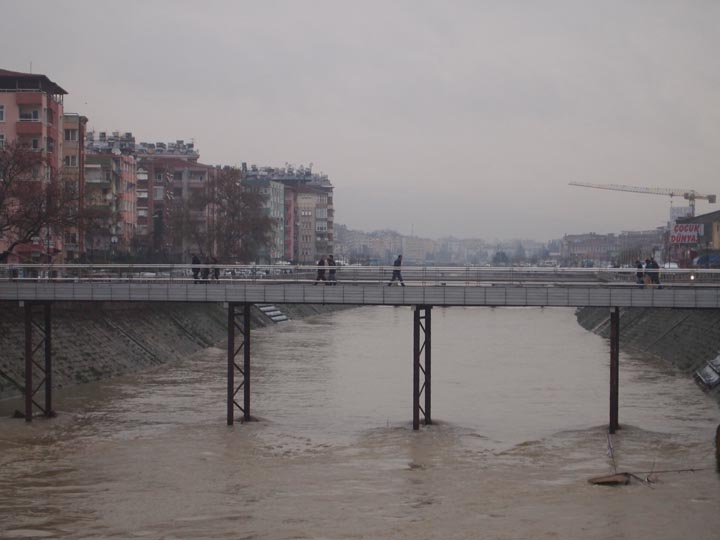 The gloomy Orontes River flowing through downtown Antakya. You can feel the dampness from this image. ©2012 Derek Henry Flood

Antakya- I have an article out in today’s edition of Asia Times Online on my view from a rain soaked Hatay Province of events just over the border in a besieged Syria. It’s been raining here nonstop since my arrival, which I’m told is the norm at this time of year. It’s cold and damp. I unknowingly checked into an Alawi-owned hotel in the center of town. As soon as I arrived I met with a brilliant and incredibly friendly translator who warned me of Assad’s spies in the city and the perceived allegiance of their co-religionists here on the Turkish side of the border. The Alawis of the hotel would surely notify the local Syrian mukhabarat stationed here, the translator told me. They would be alerted to my presence upon arrival. This was apparently accepted as the norm in Antakya. When my sources showed up for an interview in my room, their first comments was, “you had to check into an Alawi hotel?” They laughed and I made a self-depracating comment about being a naive Westerner who would never have guessed where I was staying would be an issue.

It’s always an awkward juxtaposition to be in such a vibrant, relatively healthy community when next door to a hot war where shells are falling. I’m sitting in limbo in my hotel, which I must say is fantastic for the price ($39 USD a night for a king size bed and great wifi).  I wait patiently for a contact to call me for a lead into the next story. I duck into a hallway to get out of the constant deluge. He tells me of danger ahead. A zone where journos aren’t collaterals but rather the targets of snipers and tank operators. I must tread with caution. I tell him I’ve been to Libya and was nearly hit by a Qaddafist sniper last summer. I don’t want a repeat of the same. Or do I?

Here’s the reality of the journo mindset. When everyone was kept out of Syria and that was simply accepted as the status quo, there was no issue. But as soon as one person gets deep into Homs behind the lines with the Free Syrian Army or talks about freely walking around the liberated town of Zabadani, that raises the bar for everyone. It is a furious momentum that builds around a set of extremely driven, competitive, often brilliant people where one’s feet can float off of firm ground drunk on the false notion of invincibility. It is all a farce. Yet it goes on. None of the bogus justifications or rationales in the world can make sense of dying in another man’s war.

When I noticed on Twitter that the New Yorker’s Jon Lee Anderson (whom I met in Libya a few times) was inside Homs, and I’m sitting, twiddling my thumbs in Turkey, it gave me that feeling. Of course Jon Lee made it inside Syria. He wouldn’t accept anything less than being on the first tier of a story. A guy like him doesn’t waste his time on the periphery. He goes for the jugular of the action, the beating heart of the story.

I can perfectly picture the journo hotel in Damascus. Blackberrys abuzzing, people staring at their MacBooks pretending not to notice one another, nervous freelancers networking amongst A-listers. Then again, I always see myself as an outsider never fully wanting to be on the inside. It is as if I am stuck in the mindset of the D.C. hardcore scene circa 1981 and I never want to sell out. Just a Minor Threat. I remember seeing Tim Hetherington outside the hospital in Ajdabiya about a month before he was killed in Misrata.  Jon Lee was there. Everyone who was left in Libya seemed to have turned up that day. I stood in the morgue silently looking at horrific casualties. I was warned by a group of edgy fighters at the western gate not to dare return the following day or there would be severe consequences. The following day a group of journos were grabbed out of their vehicles by Qaddafists. I was in a cramped minivan making the 14-hour trek back to Alexandria with a Libyan family lucky enough to have the money to go to Cairo. 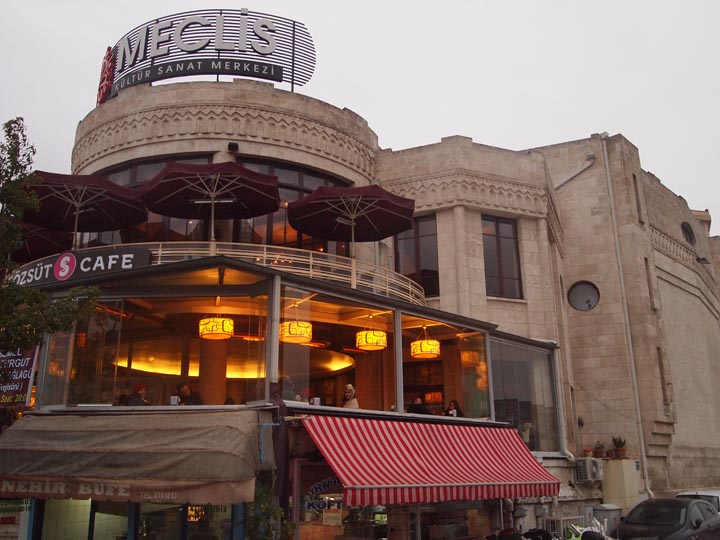 To try and get in becomes a nearly irresistible urge. I fight a battle between the lusts of my lucid imagination and my more over the horizon goal of living as long as possible. There is only so long I can people watch non-hijabed gorgeous Alawi or Alevi or whatever Westernized looking Occidental girls strut by in the cold rain from the open air juice bar or çorba (soup) stand. I joked with my translator friend that there are probably more girls in Turkish-Kurdish areas of Germany rocking hijab than those in downtown Antakya. The mix of ethnicities and sects here makes for a colorful human cast. Yesterday after hearing the fajr azan (the morning call to prayer), for the first time I’ve ever noticed in Turkey (save for possibly once in Trabzon a decade ago), I heard church bells ring out. For a moment in time it feels like a paradise of fierce torrents until I remember that there are Soviet-era Syrian tanks facing Turkey not so far away at all.

There is a war nearby with a gravitational pull. You can tell yourself, “just one more harb (war), one more thawra (revolution), and then I’ll quit.” I’m not forcing myself to be here. Hell, I love it here. It’s damn exciting to be crass about it. Throughout the ummah, everything seems to take place in the shadows, within the whispers. And that, to be frank, is part of the draw. A world of public denial, a culture of the unspoken. Sex, drugs, war, it’s all available from Morocco to Mindanao. A quick phone call, a short text message, a soft knock on a hotel door. Here in this lovely rump province of French Mandate Syria, the Sajak of Alexandretta, I somehow feel at home. In fact, there is no place I would rather be at the moment. 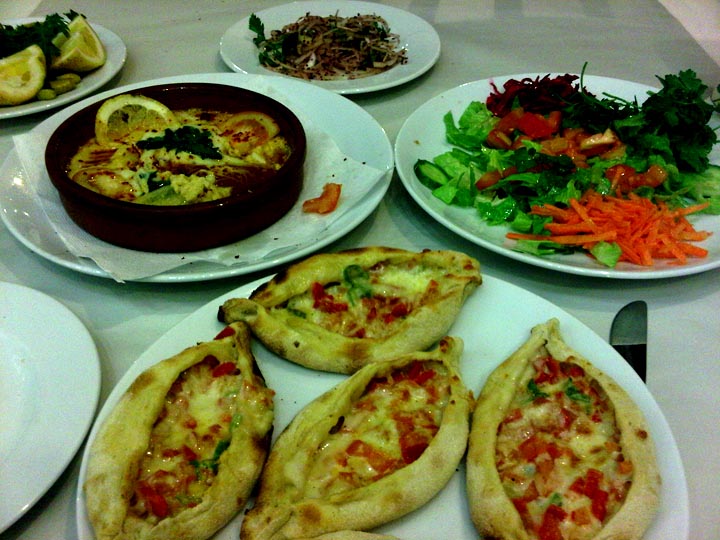 One of the best facets of Turkish life: the food. Kasarli Pide (Turkish "pizza") in the foreground. a feast fit for a sultan in the city of Adana after a long trip from Queens. ©2012 Derek Henry Flood

← The Waiting Game
Living to Fight →