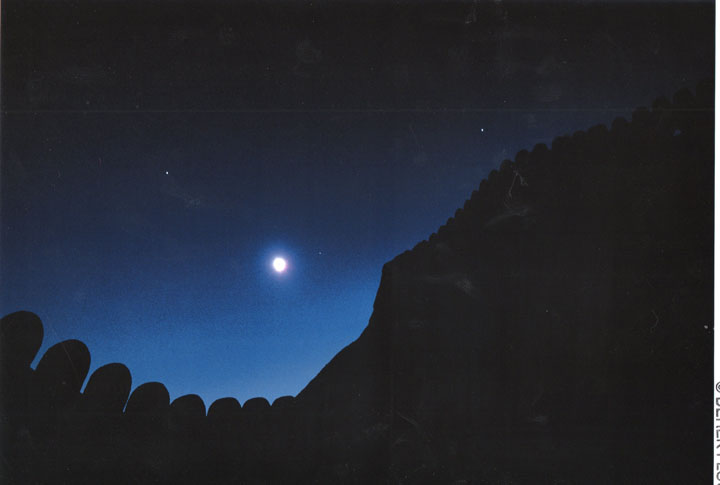 On 11 August, 1999, I photographed a total solar eclipse from the Arg-e-Bam (Citiadel of Bam) in southeastern Iran's Kerman Province. On 26 December, 2003 the citadel was largely destroyed in a calamitous earthquake which killed almost 27,000 people, nearly a third of the city's inhabitants. ©1999 Derek Henry Flood

New York- In sorting through some old belongings today I found a couple of now ancient-seeming portfolios which I went to a lot of trouble to make at the tail end of the portfolio era. In what turned out to be fruitless, expensive exercises in futility I spent countless hours (not to mention loads of money on ink and specialty papers) printing attempts at gorgeous images. I scanned some of the images and decided to show them here on this blog. Though these images may appear, and perhaps are, somewhat random, they were part of my earliest project concept which I titled “The Fabled City.” I envisioned it as grassroots, multimedia education project to enlighten denizens of American cities about the complex civilizational crossroads where South Asia, Central Asia, and the Iranian Plateau intersect.

The ultimate goal of the project was to then inform the public about the people and socio-cultural history of Afghanistan working past the entrenched framework of Afghanistan clichés as a “buffer state,” “failed state,” or worst of all, “the graveyard of empires.” Could you imagine if a coterie of overeducated policy wonks and far removed armchair historians constantly referred to the country you call home as some sort of “graveyard?” Or in the case of Pakistan, “the world’s most dangerous place?” Or Iran being “evil” in some way?  Though all of these terms are or were meant to have a purely geopolitical resonance (in theory), it is a short jump to the demonization of a culture particularly when punditry is then mixed with geographic distance. 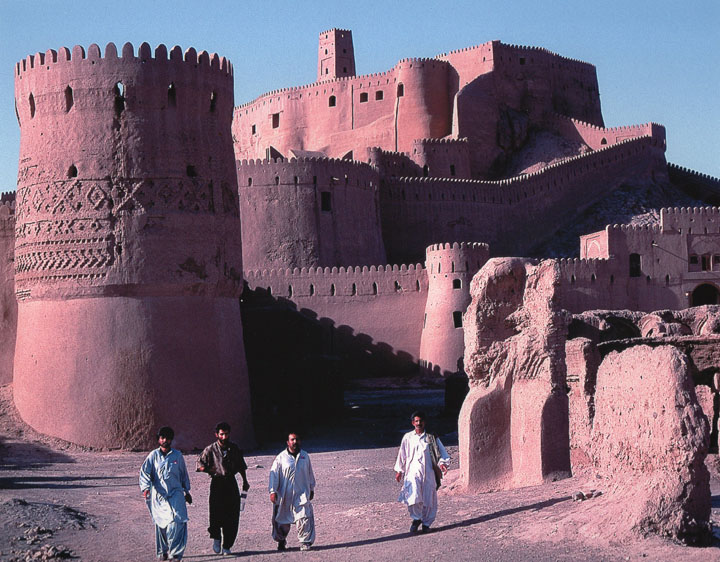 I had an idea-somewhat indicative of the era-to do a guerrilla-style wheatpaste poster campaign in the manner of a 1990s New York City street artists like Cost and Revs (who have long since faded into relative obscurity). I thought I could bring awareness to this region-much of which had been cutoff the the outside world since 1979-by starting a one man grassroots poster campaign. I was gearing up to embark upon this idea just as 9/11 shook this city. My plan to photograph Taliban-ruled Afghanistan (ie the Islamic Emirate) after the winter snows thawed in the spring of 2002 morphed into doing war photography in the Islamic State of Afghanistan among the United Islamic Front for the Salvation of Afghanistan (ie the Northern Alliance) some six-months ahead of schedule. I still clung to this idea well into the 9/11 wars.

At the height of the war in Takhar Province in early November 2001 I managed to visit the broken columns of the heavily looted Graeco-Bactrian city of Ai Khanoum overlooking the Panj River dividing Afghanistan and Tajikistan. In Iraq in May 2003 I climbed the humongous, spiraled minaret of Malwiya in Samarra before things turned ugly in that country’s nihilistic fitna and anti-occupation war. The minaret was later attacked by insurgents in 2005 after American soldiers carelessly used the ancient monument as a lookout post. From the top of the Abbasid calpihate-era Malwiya, I gazed at the magnificent al-Askari shrine housing the bodies of the 10th and 11th Twelver Shi’ite imams, its gilded cupola shining brilliantly under the Iraqi sun. The sacred al-Askari dome was later demolished by Sunni sectarian fighters in February 2006 and its minarets were destroyed by them in June 2007.

I was digging around in a musty closet and unearthed these decade-old prints which I then hastily scanned in a consumer Epson flatbed scanner. I don’t have much use for these rather benign, old prints now. Maybe I will finally paste them up around the Brooklyn or Queens waterfront as I intended to do exactly a decade ago. The Fabled City was crushed in the collapse of the Twin Towers. Unending war and terror would come to rule the day rather than the elements of architectural elegance and sophisticated history I had hoped to use as tools to foment a better day. 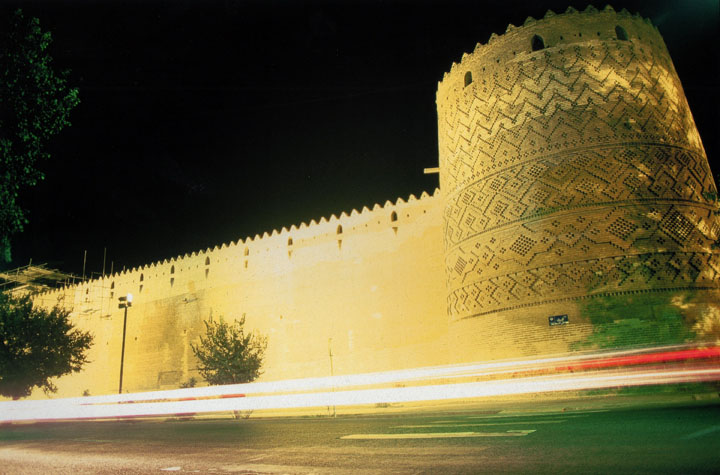 The Arg-e-Karim Khan at night in Shiraz, Iran. Note the incredible tile work on the tower. ©1999 Derek Henry Flood 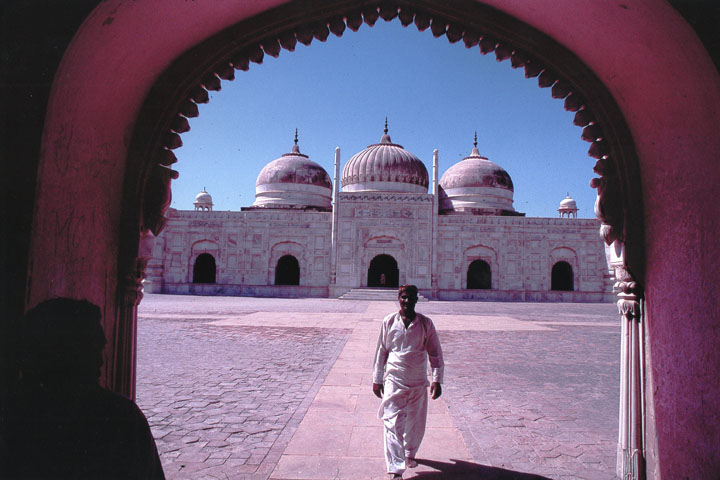 The Abassi mosque complex in southern Punjab Province's Cholistan Desert outside Bahalwalpur, Pakistan. Under the blistering desert sun, the local men had me stand on a marble slab in the geometric center of this courtyard that was inexplicably cool even at high noon. ©2000 Derek Henry Flood 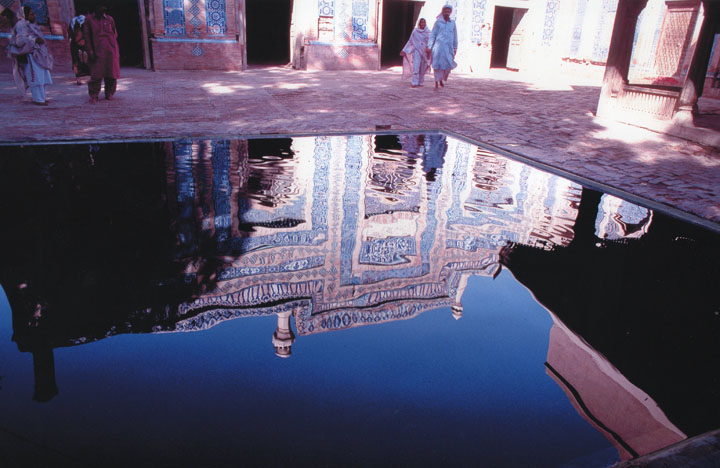 The reflecting pool in front of the tomb of Jalaluddin Surkh-Posh Bukhari at the Uch Sharif complex outside Bahalwalpur, Pakistan. Bukhari was a prominent Sufi evangelist and is revered as a saint by regional practitioners today. As his name denotes, he originated from Bukhara in what is now present day Uzbekistan. This place to me represented the idea of Central Asia and South Asia being part of one cultural and religious continuum. Here the facade of the Fabled City rises into the sky. ©2000 Derek Henry Flood

← An Overview of Syria’s Armed Revolution
The Kalashnikov →