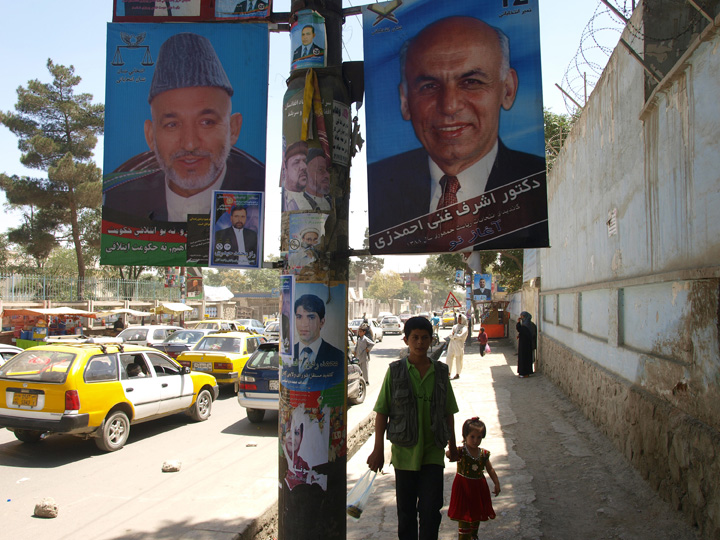 Ghani the World Banker technocrat. Posters of then incumbent Hamid Karzai (whose fraudulent reelection was all but assured) and opposition candidate Ashraf Ghani hung from a lamp post during the August 2009 election campaign. In 2009 Ghani garnered about 3% of the vote and Abdullah was Karzai’s only real threat. ©2009 Derek Henry Flood

New York- Persistent crises in Ukraine and Iraq, and now of course the reoccurring terror in Gaza, have overshadowed the succession impasse in Kabul to a good degree in terms of media focus. Afghanistan is at yet another perilous crossroads that has threatened to fissure the country in a manner that hasn’t been seen since 2001 when Mullah Omar’s Islamic Emirate abutted Burhanuddin Rabbbani and Ahmad Shah Massoud’s Islamic State of Afghanistan. 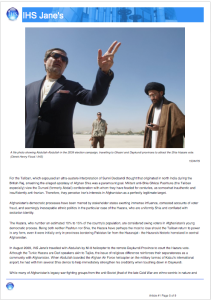 In the mindset of the two warring parties, they theoretically both occupied the same administrative space. Going to the Afghan consulate in Peshawar in 2000 and going then to the Afghan embassy in Ankara in 2001, both sets of representatives would tell the visitor that their faction were Afghanistan’s rightful rulers. Although functionally on the ground the two political entities respectively operated failing large and small rump states. Fears have been running high in Afghanistan in 2014 as it tries to make the very awkward transition beyond the years of rule by Hamid Karzai who has effectively been in power continuously since the Bonn Agreement in December 2001.

I have a new article out in IHS Jane’s Islamic Affairs Analyst (subscription required) entitled “Electoral turmoil-Afghanistan’s Troubled Democracy Faces uncertain future.” Just after its publication John Kerry brokered a deal between Ashraf Ghani and Abdullah Abdullah’s campaigns that was hailed as a potential lifesaver for Afghanistan’s still nascent democracy.

Importantly Kerry’s hoped for diplomatic initiative may nail down the Bilateral Security Agreement (BSA) that Karzai has obstinately refused to sign. The unsigned BSA has left Washington and its remaining allies’ Afghan policy in limbo for some time now.

What is being referred to as a “national unity government” may perhaps end up as a power sharing agreement in which presidential power is lessened and the post of prime minister is created to satisfy the ambitions of both striving candidates. And where does all this leave Mr. Karzai himself?

For now he is still Afghanistan’s head of state where he is all too comfortable after so many years of relative isolation. The newly elected president was meant to be inaugurated  on August 2, a now wholly unrealistic time frame. With the staggering vote recount prescribed to heal the rift between Ghani and Abdullah–who both view themselves is the election’s true winner– again, Karzai remains politically relevant in the interim. 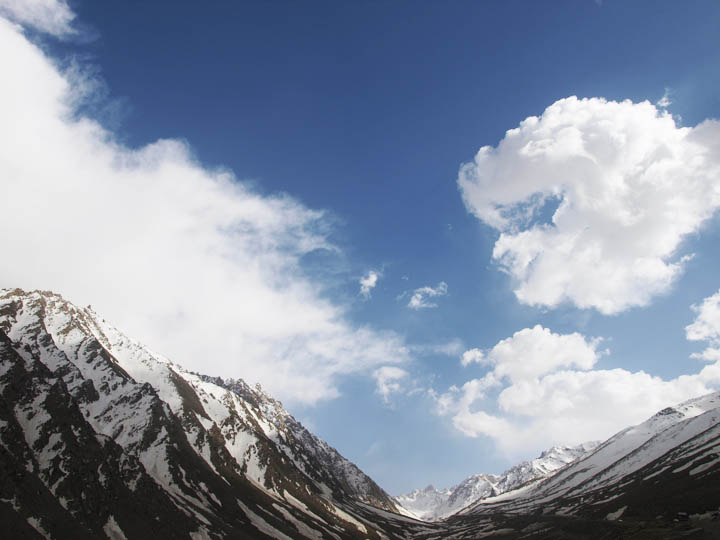 The Salang Pass situated Hindu Kush range in Baghlan Province is a critical land route juncture heading toward Pul-e-Khumri situated between northern and southern Afghanistan. This mountain pass represents a human, geographic and political fault line that has not properly healed since the internecine mujahideen battles of the 1990s . ©2008 Derek Henry Flood

One question that has yet to be answered is what will become of the current president once this situation is ultimately resolved? Will Karzai immediately flee to Dubai or Doha upon leaving the Arg (Presidential Palace)? Karzai has said he will stay home but in doing so he will risk retribution by the Taliban or being trotted about in court on corruption charges by an emboldened new government seeking credibility following yet another grossly flawed balloting process.

Lastly what will the new government look like and how should it act? After an uninterrupted period of post-Taliban Karzai rule, Afghanistan clearly has a long way to go to become a genuinely working democratic state. With that said, Afghans have made more progress with democratic mechanisms than many of their neighbors to the north in despotic Central Asia (Kyrgyzstan excepted).

Personally I hope the crisis created but the April 5 and June 14 votes can be amicably mended. But I am not as hopeful as Mr. Kerry for the time being.

← Getting Up on the 4th of July
Out the Window →