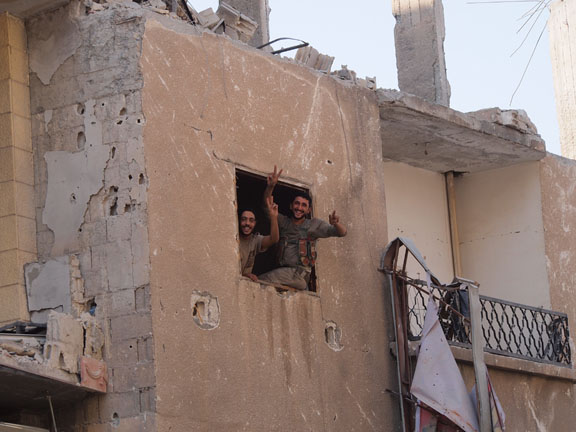 SDF fighters throw up victory gestures in the final phase of the battle against IS in central ar-Raqqa. ©2017 Derek Henry Flood

Barcelona- I have a new article out with Jane’s Terrorism and Insurgency Centre about the risks faced by the American-backed Syrian Democratic Forces following their final defeat against the so-called Islamic State. My piece assesses what the armed landscape will look like in the near term following the territorial demise of kalashnikov-toting adherents of salafiyya-jihadiyya ideology who sought to erase the physical history of the Ba’athist, post-colonial, and ancient edifices on which the peoples of the Tigris and Euphrates river valleys draw their culture in order to create a macabre, social media-fueled vision of utopia. 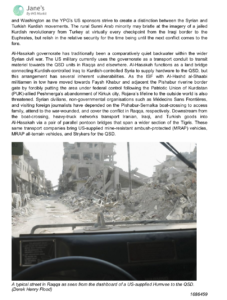 As militants from as far afield as Trinidad and Turkmenistan are killed or attempt to flee, this will force several awkward realignments of both state and non-state actors. The United States military has no coherent policy on an end game for its Syria strategy, stating it is solely focused of defeating IS with its SDF partners. But as the battle is all but entirely finished save for a small pocket of eastern Deir ez-Zor, this narrow, soda straw view of the war there does not factor the next phase of which it is on the precipice.

The air force of the Russian Federation is pummeling rebel enclaves that continue to resist the al-Assad regime in faltering scorched earth policy reminiscent of the shelling of Grozny in the 1990s. Moscow insists it only has advisors in the context of the Syrian Arab Army’s ground war but that doesn’t include Russian and other CIS citizens who are fighting on behalf of the opaque doings of private military companies supporting the regime in the name of hard currency.

And this is only to name but a few looming factors as the calcified regime in Damascus tries to hold and consolidate its gains with Russian and Iranian support. The regime may try to evict the various factions that comprise the SDF from ar-Raqqa and environs lest another player joins the action space (read:Turkey).

← Hawija Finally Collapses but for How Long?
Along the Bosphorus →