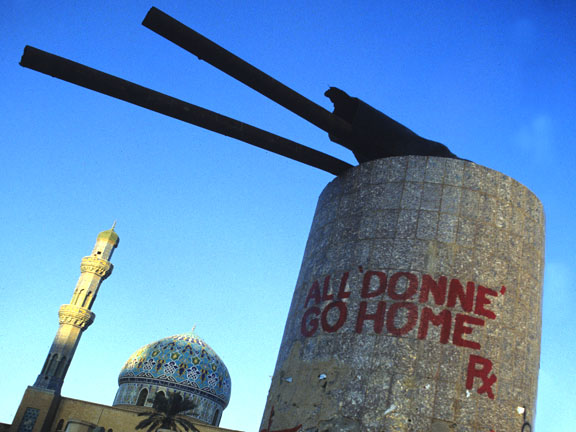 “All Donne [sic] Go Home” The feet still sit atop the plinth where the statue of Saddam Hussein was torn down on April 9 2003 in Firdows Square. ©2003 Derek Henry Flood

Erbil- Today marks fifteen years since the disastrous Anglo-American invasion of the Republic of Iraq. Eighteen months after the American intervention in the Afghan civil war became internationalised in response to 9/11, the next phase of what I refer to as the Terror Wars began as the Iraqi state was violently dismantled with  disproportionately expensive munitions.  This air campaign and concurrent ground war were quickly followed by a bumbling know-nothing former US ambassador to the Netherlands establishing an awkward neo-colonial ad administration in Baghdad that was more bent on disenfranchising Ba’athists that permanently repairing the power grid. The United States, along with its junior partner the United Kingdom did not have a clear vision of who their enemy was.

New York, Pennsylvania, and Virginia were attacked by al-Qaeda, a transnational salafi-jihadi organisation with a Saudi face but an Egyptian ideological backbone. The Taliban and al-Hizb ul-Ba’ath did not plot nor launch any such attack yet they morphed into the targets of the Terror Wars in terms of proportionality. That is not to say they were not despicable regimes, each were both deceptive and vile. The Taliban unrepentantly sheltered al-Qaeda leadership and allowed the travelers of its morose caravan safe passage. The minoritarian Ba’athists in Baghdad, who had worked to modernise the Iraqi state through repressive and often violent means, were secretive and paranoid regarding their Shia Iranian neighbours to the detriment of all other international relations.

But did either post a meaningful threat to America and the collective West more broadly?

The late Iraqi president, Saddam Hussein, referred to in the American media almost exclusively as simply ‘Saddam’ (imagine how it would sound if Vladimir Putin was always referred to as just ‘Vladimir?’) having fought an eight year trench war against millenarian Shia revolutionaries in Iran was still concerned about his country falling into the hands of what he perceived as his true enemies, the ‘Safavids’ (a derisive term for Iranians in the Iraqi context). Saddam Hussein feared Iranian power–the near enemy– more than the United States–the far enemy–who had stopped short of dislodging him in 1991.

Fifteen years on the United States military is still operating in Iraq (as well as Afghanistan) albeit on a much smaller human scale. Would those avidly viewing “shock and awe” on Fox or Sky news fifteen years ago today have supported attacking this country had they the foresight it would last this long? One can suppose almost certainly not.

Many of al-Qaeda’s core leaders from the late 1980s and mid-1990s have been killed in drone strikes or in the occasional successful special operations raid. But AQ ideology, a strain of replicating salafism that relies on coercion and mass casualty religio-politcal violence to spread its self-appointed righteous messaging has dimmed. This occurred not in the face of the Terror Wars wins on a military scorecard or effective counter-terror efforts but because a more polished peer competitor, the so-called ‘Islamic State,’ came along with a slick millenial social media portfolio to oust AQ from its perch atop Sunni radical primacy.

Saddam Hussein was hastily executed at the end of 2006 while in stark contrast Mullah Mohammed Omar died in secret to all but his closest confidants in 2013–though this was not revealed until 2015. These men were detestable despots each of their respective forms  but it can be argued fairly easily that neither posed a direct threat to the hard security of the American mainland. AQ on the other did and does though it is currently competing with its splinter-cum-rival IS within the salafi conflict realm on several fronts.

Here we are with war in Iraq still grinding on in what is simply a new phase. Yet there is no end in sight to Iraqi suffering as the fitna (internecine Muslim warfare) that was borne out of the laboratory of the occupation that began a decade and a half ago continues with macabre zeal in the present day. I doubt few Americans are aware of this anniversary and those that do may not care all that much. 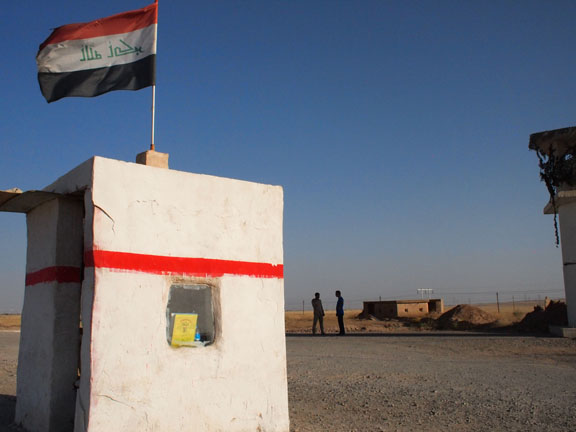 Iraq 10 years after the invasion, soldiers chat at a remote checkpoint in Kirkuk governorate that would soon fall to IS months after I shot this image. ©2013 Derek Henry Flood

Iraq is a half a world away from the United States buffeted by the (now also war-torn) Levant, Mediterranean, and the vast, deep, frigid Atlantic Ocean. Baghdad is seven hours ahead of the East Coast where many if not most of those neoconservative charlatans and self-described well meaning liberal interventionists still live and work.

Why anyone who advocated for regime change here, be it in the op-ed pages of major American newspapers or in the halls of congress still finds gainful employment is far beyond me. Their words and shoddily founded opinions were and are responsible for the lives of hundreds of thousands of Iraqis and some 4000 American servicemen. Before there was to be kinetic warfare there was a venomous lobbying war in Washington as well as London. Those talking heads who have issued a paltry few mea culpas in the last decade cannot truly atone for their intellectual sins. For they do not have to live in the hell they help foment.

The war in Iraq incubated the most loathsome of human behaviours that are now commonplace in this region. Beheadings and suicide bombings went from being the remote tactical exception to the norm, espeically in terms of militant propaganda. This society was traumatically brutalised by al-Hizb ul-Ba’ath for decades and that repressed legacy was allowed to come to the surface as globalist salafism spread in the context of the concomitant internet revolution. When I first arrived in Iraq in 2003, I had no way to check my email for weeks, only big money corporate journos who had imported satellite phones from Dubai or London had the ability to be online but even so social media was in its infancy.

Iraq today still burns with rage, as does now neighbouring Syria. Iraqi friends of spoken with from Kirkuk to Baghdad to Basra, assert that the legacy of ethno-sectarian politics entrenched since 2003 has left Iraq more dangerous and dilapidated in many places than it was under the collective punishment of 1990s era UN sanctions.

There is still no end in sight.

← In the Disputed Zone
Crossroads of a Global War →