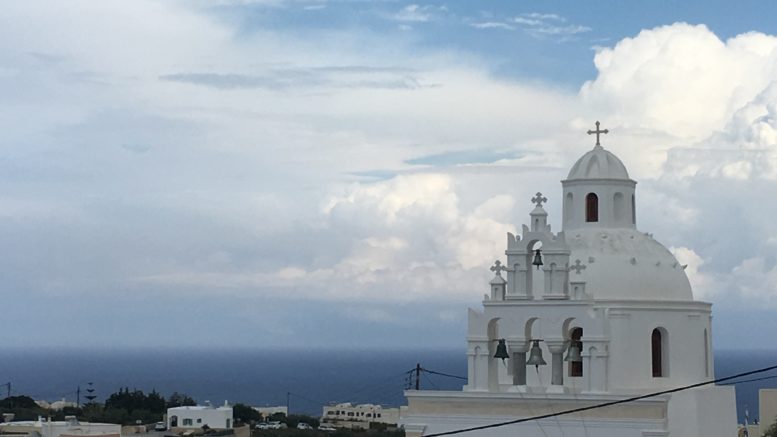 Thera- Having come to Greece, or the Hellenic Republic as it’s actually called in English or Hellas more colloquially, for over two decades, I have a deep attachment to the place. But my personal history and relationship is a very narrow one involving just Athens and the port town of Piraeus as they relate to going back and forth to the Cyclades island group. I always have the best of intentions of visiting other parts of the country but that rarely works out. Back in 2015 in the heady summer of refugees welcome, I had finally resolved to visit Thessaloniki (aka Salonika). After paying for an airbnb in the city centre up there, I didn’t realise there were no seats on either trains or buses as genuine refugees lumped in with political asylum seekers and throngs of economic migrants posing as either of the two former heading toward Macedonia (since renamed North Macedonia to appease Greek nationalists and thereby open the door to possible EU assimilation) in their collective exodus to reach Germany or Sweden . Then there were no flights from Athens as there was an election whereby people were going home to cast votes and see family. An extreme example to be sure, but alas I’m in my content, utterly familiar Cycladian rut.

The island I may be on at any given time is a signifier of age to some degree. For much of my youth, I traveled to Ios which is situated neatly midway between here and Naxos. The island was a notorious party place since perhaps the early 1980s and so by my arrival in the late 1990s its place as a rite of passage was well established. Its pin to the ancient world was that it is said to be the burial site of Homer. Homer, if one believes he was an actual individual person depending on what side of the Homeric question the reader falls on, was born in Ionic-era Smyrna (today’s Izmir in modern Turkey), lived on Chios in the North Aegean, and perished on the “insignificant island of Ios” according to the 1965 work of the late English classicist Geoffrey Stephen Kirk entitled Homer and the Epic: A Shortened Version of The Songs of Homer.

Ios never became as developed as some of the other islands here because it had no airport and was only promoted as a fairweather destination. It was the haunt of Australian backpackers and Irish seasonal workers as I remember it. But this little place known mostly for summertime debauchery was what lured me into Greece to begin with. At night, walking back from the Chora (town) to Mylopotas beach, I would hear the bells jingling around the necks of a goat flock in the nearby brush as I trundled down the donkey path toward wherever I had a bed for the night. Beyond the red bull-fueled (and brand new thing at the time) bacchanalia in the main square, I somehow felt connected to the ancients. The constellations shone above the shimmering blue sea to give the feel of an epic, uninterrupted continuum where history never ended.

This time around I ended up on an unplanned, extended stay on Naxos, the largest of the Cycladic islands. It doesn’t have the mass global tourism of here or Mykonos owing at least partly to that it doesn’t have an international airport nor a reputation as a bucket list destination around the world. A more provincial feeling place, the tourists there were entirely mainland Greeks or Westerners and the island only had a tiny handful of male Pakistani migrant workers. Here on Thera, primarily referred to as Santorini (Santa Irini-Saint Irene), it is back to a more bustling cosmopolitan reality with huge numbers of Chinese, and now Indian, tourists who come for short, busy, selfie-laden stays. There used to be large numbers of Russians as well until sanctions were set in place for the Russian president’s war in Ukraine in 2014 and the ruble plummeted in due course. Though only a 1-2 hour ferry journey apart, it is as if Thera and Naxos are on two different planets in terms of the numbers and national demographics of visitors.

As it sit and type this rather simple blog post, the Turkish military and its Syrian Arab and/or Türkmen epigones are reportedly beginning to attack northern Syria. I’m constantly flipping back and forth from WordPress to Twitter to keep up/see what I’m missing. But Thera, as the late British novelist Lawrence Durrell once wrote about Corfu, with the encompassing Ionian sea “being like the heartbeat of the world itself.” For me that is the Aegean and Thera is my 21st century Corfu.

The Futility of Battling Ideology at War’s End

Be the first to comment on "The Heartbeat of the World"