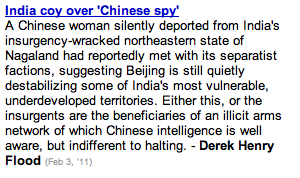 New York- I have a new story out in today’s Asia Times Online about an alleged Chinese spy who was detained and deported from India in what seems to be a very curious case that has received no attention in the Western media that I know of. I came across the story while working on the new issue of Militant Leadership Monitor and decided that it was worth devoting a full article in and of itself.

A lot has happened in the world since I have been pecking away at my laptop. The Finest supermarket in Kabul’s Wazir Akbar Khan neighborhood was suicide bombed last Friday that killed at least eight (or nine). While covering Afghan politics in 2009, I survived on provisions from the Finest Shahr-e-Nau location which often had the only working ATM in the city and was walking distance along dust-choked streets to the places I was holed up while filing stories. The Finest stores are owned by Sayyed Mansoor Nadiri, the head of Afghanistan’s Ismaili community and cater to Westerners in the city, making them an obvious target of Deobandi suicide attackers. I met and photographed Nadiri briefly while he cast his vote for Karzai on election day in Kabul and instructed all of his followers to vote for Karzai as well in one of Karzai’s many back room palace deals he cut with warlords and religious leaders to guarantee his “reelection.” I used often drive by the Wazir Akbar Khan location coming back into the city center from Jalalabad road and sit by the traffic circle nearby and observe Western mercenaries mingling in the parking lot after a hard day of tooling around the city intimidating Afghans and looked upon them with disdain. In any war zone, mercenaries are the bottom of the barrel in the hierarchy of “war tourists” and are a favorite target for insurgents. A deadly conflation appears when mercenaries, as fellow Westerners, consume the same goods and services as journalists, diplomats and aid workers and the wished for, supposed distinction of identity washes away and one target becomes indistinguishable from another in a highly chaotic environment. Kaboom!

Then al-Qahira (a.k.a. Cairo) where a day of rage has turned into days of rage and the Obama administration has consistently been “not out in front of this thing” to use my favorite political cliche of late. Mubarak has been the tallest hypocritical cornerstone in America’s bogus democracy promotion agenda for a long time. The last time I was in Egypt was after traveling there via Jordan after the American invasion of Iraq in the spring of 2003. Iraq was singled out by neoconservative ideologues as an unpalatable dictatorship that had to be overthrown by force and at once, largely because it was a dictatorship or so the world’s public was told (depending on the day and which way the wind was blowing). Egypt and Jordan, an authoritarian presidential patronage state and a constitutional monarchy respectively, are dictatorships that are stood up by the U.S. taxpayer due to their pliable leadership and peace treaties with Israel, another highly unegalitarian state. Here in the United States, every Zionist, anti-Arab pundit is desperately scrambling to play the Muslim Brotherhood card to confuse and frighten an unfortunately, largely naive public. These pundits views are as out of date as the Brotherhood’s. They only believe in democracy promotion so long as it fits their very narrow idea of democracy, an impossible fantasy in most of the world. Throughout the Cold War, we were told that the Arab world was not ready for democratic and open society because it would create a dangerous vacuum filled by the then boogey man de jour, communism. Now plenty of such Cold War-reared pundits are having a field day warning that the American public should not cheer on a liberation revolution on the streets of Egypt’s cities because surely nefarious Islamists will fill the dangerous void if Mubarak flees, say, to Saudi Arabia, another dictatorship. Then there are those that say things like “well we don’t know if Arabs are ready for democracy” which is akin to those who asked in 2008 whether American voters were “ready” for a black president. Basically, soft racism. The revolution in the Arab states of North Africa and the Middle East is being televised and it is nearly irrelevant what a White House press secretary says in a reactive rather than proactive statement at this point.

← Watch Silencing the Song this Wednesday at 8pm on HBO2
Suicide Bombing at Kabul Mall-Does Anyone Even Care? →