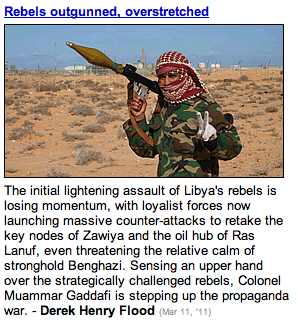 Benghazi- Things are looking a bit bleak from here today. The Qaddaf’s are now making a serious push east while Seif is blabbing about never surrendering and never giving up the country. The rebels are backpedaling in high gear out of the Ras Lanuf area and will have to seriously reassess their logistics and casualties in Brega. Without Western intervention, it’s beginning to look like the rebels will be toast on the highway if they don’t get their act together or get some serious, committed external support. I was wondering if Idriss Déby’s Chad, Qaddafi’s long-time regional nemesis, might help them out but I haven’t heard anything. Obama and NATO/EU are still talking while people here are ready to lay their lives on the line.

As the really nice guy who gave me a ride home last night said: “We have gone half way. We cannot turn back now. We will never go back to Qaddafi.” He then gave me a beautiful woven scarf that he said was from one of his traditional Libyan clothing shops that are closed since the start of the war. Of his workers: “Those from Egypt have gone back there. Those from here are fighting down in Ras Lanuf.” Though many here in the east continue to scoff at the Guide’s and Seif ridiculous bravado, I’m seriously starting to wonder if the party in Benghazi is over. When I first arrived, there was a huge banner on the corniche that read: “No Intervention. We Can Do It [overthrow Q] On Our Own.” The other day I saw that banner laying in a crumpled pile.

Though each night in front of the courthouse, there continues to be a carnival atmosphere that often balloons into the thousands, if Q’s crew can keep pushing along the Gulf of Sirte, can the rebels adequately defend their de facto capital? Rather than the old fashioned multi-front war that’s going on now, this could really turn into an asymmetric insurgency fairly quickly.  If the guys hadn’t been wasting so much ammo in needless displays of machismo the last few weeks, I might not be so worried. The funny thing is I’m now quite sure that it is because of the very presence of so many journalists here coupled with the lack of free expression that has existed for decades, that has caused the rebels to blow so much smoke into the sky. I often wonder if not a single camera was there, would they be wasting all of this gunpowder? It’s sort of a silly tree-falls-in-the-forest question I suppose.

Yesterday I went for lunch at  my driver Faisal’s house and he pulled out a beat up old Kalashnikov he has stowed behind the couch for when the bad days come. Or for when the street crime becomes too much to bear. He told me that a friend of his gave it to him after the army barracks were trashed at the beginning of the revolt but that if one were to try and buy an AK now, the street price is nearly 3000 dinars (approx. $2000 USD if you go to the right money changer in the souq). I picked up a few Sanussi flags as souvenirs and wandered around meeting people and trying to make a few observations. Interestingly, as so many of the estimated 1.5 million Egyptians have fled the country, which make up much of its proletarian workforce, there are still loads of black Africans from the Sahel countries here. Frail looking women from Niger and Chad line the souq’s walkways vending tchotchkes and sit looking glum with blue tattooed tribal markings on their faces. I can only infer how pathetic the Sahelian economies must be to sit in a war-torn Arab city rather than even attempt to return home. That, or perhaps they simply can’t go home if their families are depending on remissions of Libyan cash or there is the social stigma of failure if one returns to the village prematurely as can be the case in South Asia. 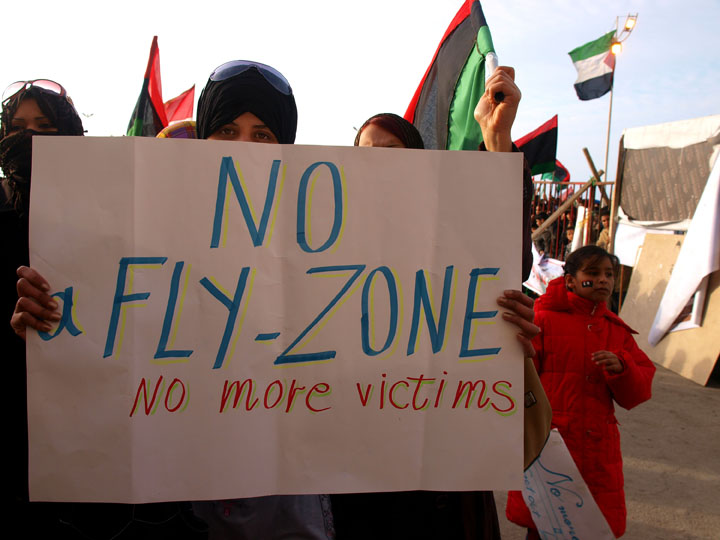 Libyans demonstrate in front of the Benghazi courthouse for a western imposed no-fly zone over eastern Libya and for the overthrow of Muammar Qaddafi as pro-government forces try to retake Ras Lanuf and Zawiya. ©2011 Derek Henry Flood 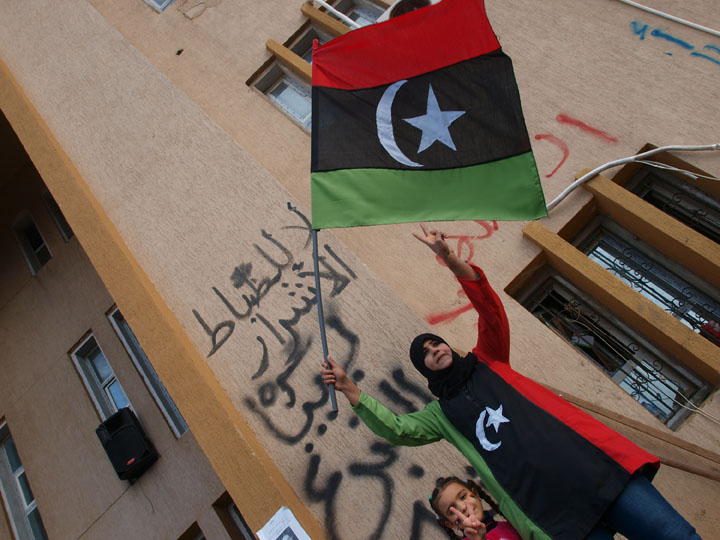 ← Merci Beaucoup!
When In Roman Libya… →