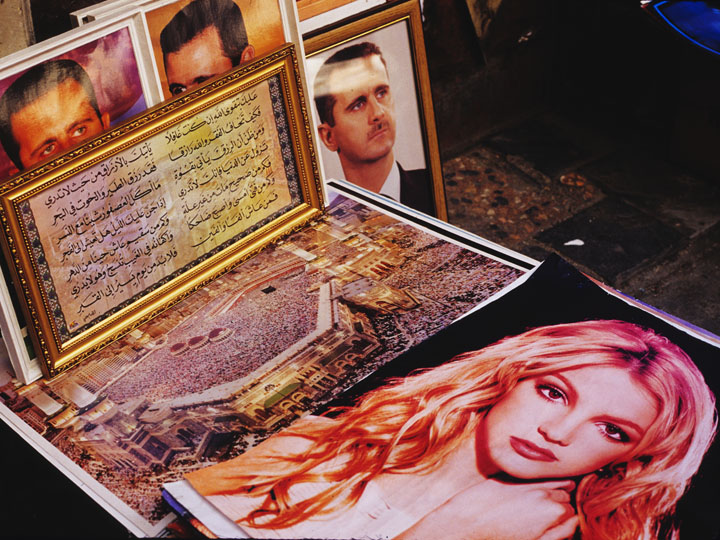 Britney and Bashar. The clash of personality cults for sale in Damascus’ old city. Bashar al-Assad had been in power just over two years since his father Hafez died and his regime was hard at work disseminating his visage in what looked to me as an outsider as a desperate bid for credibility among the people he was never meant to rule had his brother Basil not died in 1994. ©2002 Derek Henry Flood

New York- I first embarked on a trip to Syria in the summer of 2002. I had been in touch with the office of the Kurdistan Democratic Party (KDP-a.k.a. the Barzani family) in D.C. about entering Iraqi Kurdistan clandestinely from Qamishle-something they said they would be all too happy to do at the time. Of course when I got to Syria to meet my D.C. KDP’s contact in Damascus, it was a different story. I stayed at a decrepit old hotel from the French Mandate period called the al-Haramein. My main memories of the place were shaving at an open air sink on the quintessentially Levantine roof and meeting a beautiful older Syrian woman with her adorable young daughter in the sun splashed courtyard who was visiting family from Kuwait where she lived and mistook me for a Syrian (hence the aforementioned shave). Oh and also the incredibly cheap and delicious falafel carts near the end of the walking street the hotel was situated on.

Syria, to the naive Westerner, could seem to have been a deceptively peaceful police state. But Syria was and is a place with a long history of political violence and repression which the regime has until 2011 been incredibly adept at sweeping under the rug. We now know that beneath the religious and ethnic tapestry lies great anger that can no longer be repressed. The genie is out of the bottle and much as Bashar and his vile brother Maher try, the end of the Assad dynasty along with the Ba’ath Party is all but assured. Syria is a lovely country ruled by a loathsome family.

Of course the KDP guy refused to meet me saying the office in D.C. had never mentioned anything about an American journalist who he was supposed to meet. Looking back, I should have simply headed up to Qamishle and linked up with smugglers to make the semi-secret Tigris crossing. Then I recall having a devil of a time trying to email my KDP person back home because Bashar al-Assad had thoughtfully blocked Hotmail which was what I was using at the time. Anyhow, my idea totally went south and I ended up bailing Syria altogether and going to Georgia and sneaking into the Pankisi Gorge abutting the Chechen border.

I took just a few snapshots in Damascus because I thought I was saving all my film (yes, film!) to shoot the Peshmerga frontline with the Iraqi Army. So I thought I needed to conserve my film rolls. Glad I have the photos I do though because now I don’t know when I’ll be able to freely wander around Syria’s fascinating capital again. 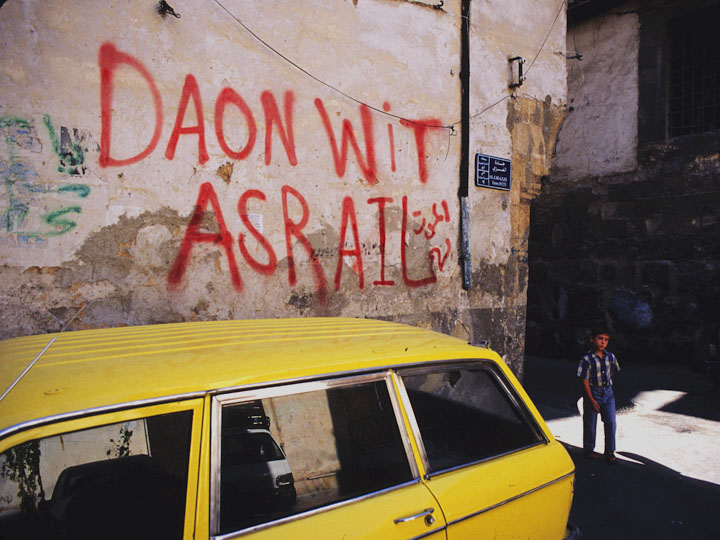 The Assad regime only allowed one kind of political expression, anti-Zionism. Any other sort of expression, such as supporting the Syrian wing of the Muslim Brotherhood, would be ruthlessly put down. All rage was to be expressed toward external enemies. ©2002 Derek Henry Flood 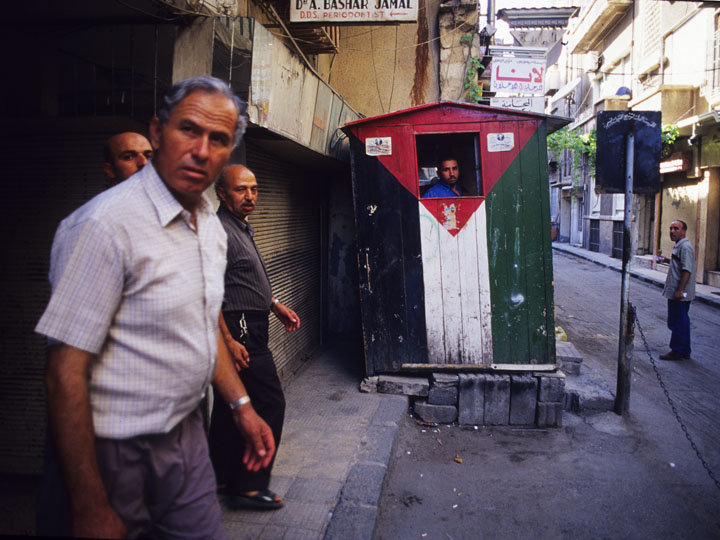 Damascus was blanketed with intermingling symbols of Arab nationalism and Palestinian solidarity which the Assad regime used to ultimately justify internal repression and deny liberalization at home. I aroused great suspicion after taking photos on this random side street with some cranky old man accusing me of being a spy. I think I had to scurry back to my hotel after this to avoid any possible interaction with the mukhabarat, Syria’s secret police. ©2002 Derek Henry Flood 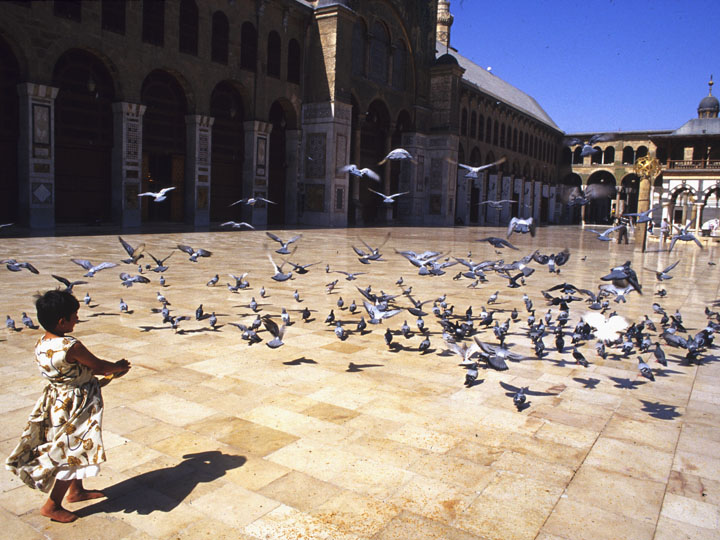 The de rigueur shot of the magnificent Umayyad mosque courtyard. No photo blog post on Damascus would be complete without one. ©2002 Derek Henry Flood 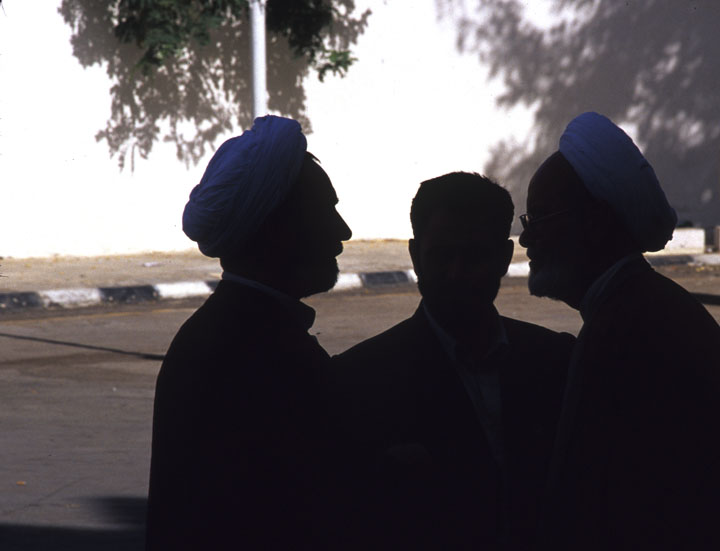 Thinking at the time that Alawite-ruled Syria had few mainstream Twelver Shia, I was struck by the silhouettes of this quiet meeting of Shia clerics in the shadows of the Umayyad mosque. Ten years later, finally taking the time to do the proper in-depth research, I know that the Assad’s welcome clerics from Iran, Iraq, and Lebanon to bolster their credentials in the region, consolidate their strategic depth in Lebanon as well as isolate (then) Saddam Hussein’s Iraq. ©2002 Derek Henry Flood 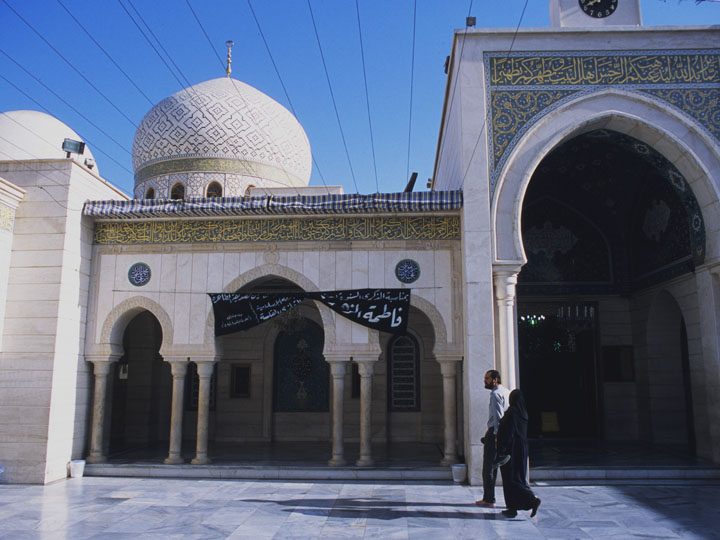 This is the Iranian-financed Shia shrine of Ruqayya, daughter of Imam Hussein, in Damascus that I stumbled upon while wandering around on a brilliant sunny afternoon killing time.  I remember how tranquil it was, shielding the visitor from noisy car horns and the general bustle of the city. ©2002 Derek Henry Flood

← The End of Bashar, Hizb-ul-Ba’ath, and the Unraveling of Arab Socialism
In Syria, like Father, like Son & Mali Slides from Democracy to Junta →