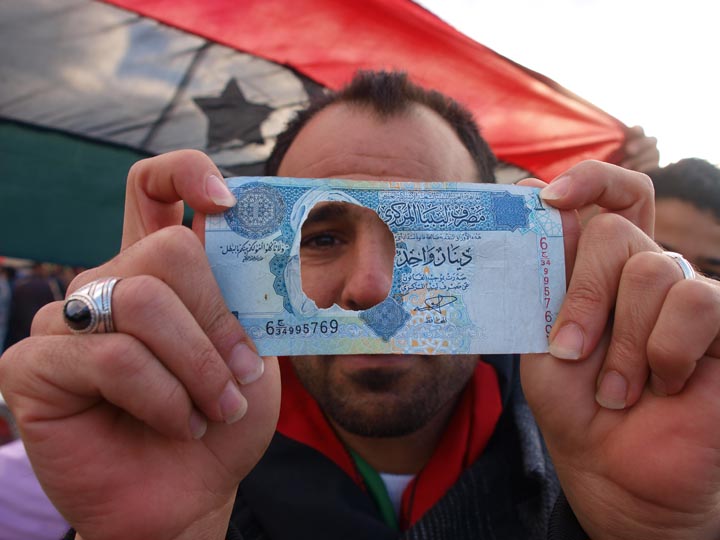 A protestor marching on Benghazi’s corniche on March 9, 2011 defaces as 1 dinar note featuring Muammar Qaddafi to shown his disdain for the Libyan dictator at the height of the Arab Spring movement. This image to me epitomizes the concept of my article featured below. ©2012 Derek Henry Flood

New York- I had a couple of long term projects published at the end of this past week. The first was an examination of the little known history conjoining Mali in West Africa with North Korea in Northeast Asia over at Asia Times Online. I discovered this newly built part of Bamako while riding around on my fixer’s motorcycle last year when we were trying to organize a semi-doomed trip toward the front line with MUAJO et co up in Mopti Region. 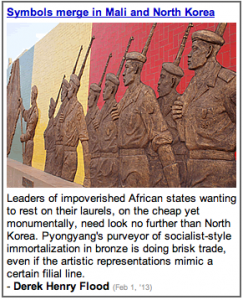 This spot I found (linked, left) in the Malian capital is called Carré des Armées (Army Square) and it was built by a North Korean state enterprise (not as if Pyongyang encourages private enterprise). As I begun to play with the idea of doing a full length article on the topic, it dawned on me that Mali and North Korea had a shared history dating all the way back to Mali’s independence from France in 1960.

Not exactly a topic for broad mass consumption, I know, but for those who it may interest, I think it’s a fascinating topic. It also speaks to a lesser understood phenomena of how ties forged in the heat of the Cold War still can very much exist in a post-Cold War world.

The ties between North Korea and Mali certainly may have lessened over the decades and have changed in their orientation (started out as political and military in the 1960s, now more transparently financial-the same goes for Mali’s relationship with China). One of the key differences between the relationships between North Korea and China with an inherently unstable state like Mali is that seemingly no circumstances would or will derail ‘business as usual.’

Just for argument’s sake, I honestly think that if Ansar Eddine and its Salafi allies had somehow managed to capture Bamako and miraculously gain some kind of political legitimacy that over time Beijing and Pyongyang would still send delegations back to Mali to get their business interests on track. After all in 1960, the government of Modibo Keita was deemed a righteous, radical enough anti-imperialist government by Kim Il-sung and co to forge ties on the other side of the world. Maybe the anti-imperial tenets preached in the context of  Salafiyya-jihadiyya would be revolutionary enough for the Beijing’s politburo and the DPRK’s Workers’ Party of Korea to be able to keep infrastructure projects going uninterrupted. Who’s to say….

The second was a passion project nearly 14 years in the making about the history and symbology of all the war zone/quixotic regime currencies have managed to collect in my travels over the years featured in The Christian Science Monitor. It spans from an out-of-circulation Iranian rial I obtained in Tehran in 1999 to a Libyan 1 dinar note I saved from Benghazi in 2011. 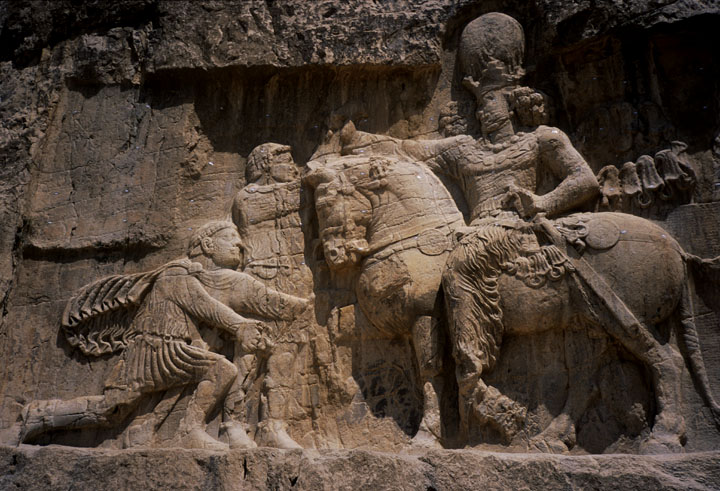 The depiction of Philip the Arab on Syria’s 100-pound note is an indicator of the deep historical ties between ancient Iran and Syria. In a rock carving at the Naqsh-e Rustam necropolis in southern Iran’s Fars Province, Philip the Arab (kneeling, far left) is shown along with the Roman Emperor Valerian the Elder (center) as they bow before the Persian king Shapur I the Great (mounted). Damascus’s employing Philip the Arab is likely no accident. Unlike the Saddam-era old 25-dinar note in Iraq depicting the Battle of al-Qadissyah showing an ancient Arab (Iraqi) enmity toward Persia (Iran)–Hafez’s al-Assad’s mortal enemy in the inter-Ba’ath rivalry–Syria’s 100-pound bill emphasized Syria and Iran’s ancient, shared history…in which Roman Arabia (present day Syria) is the supplicant. ©1999 Derek Henry Flood

Not a project that even the most ambitious young turk with a fancy master’s degree fresh out of Georgetown or Columbia could have done. It’s a bit of a blood, sweat and tears project in that sense and I was thrilled to have it come to fruition. I’ve dealt with countless fast talking money changers, sky rocketing wartime inflation, crossed borders only opened when regimes were in the process of being toppled and made all sorts of other absurd, laborious entreaties to obtain this collection.

Many of these specimens were lost for years or so I thought, until I uncovered them last fall in a musty storage locker and began to examine them one by one. I then realized they merited an article treatment on their own.

Most of these notes (except the Qadaffi-era dinar which is still in circulation pending the release of new notes by Libya’s central bank) are long out of circulation. And more importantly, each banknote tells a story both in its iconography laden artistry and in the circumstances in which I obtained it. The 20th anniversary of the Shia Islamic revolution in Iran, the post-9/11 war in Afghanistan, the Anglo-American invasion of Iraq, and so forth. 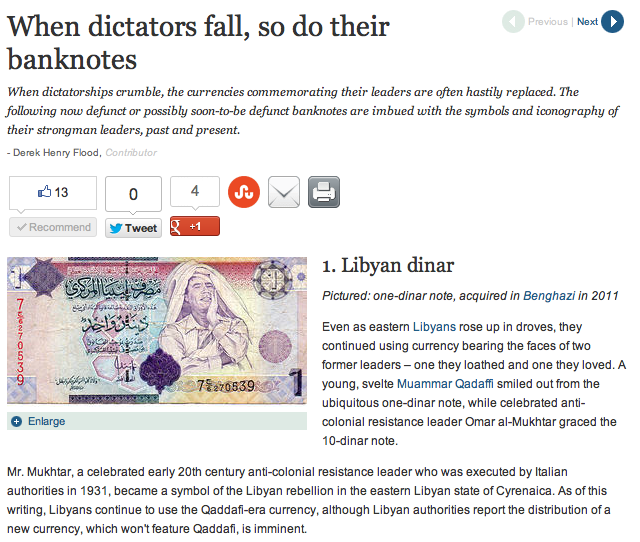 ← TWD Mali Media Offensive
Beyond 2014: Afghanistan, Pakistan, the West and the Rest →