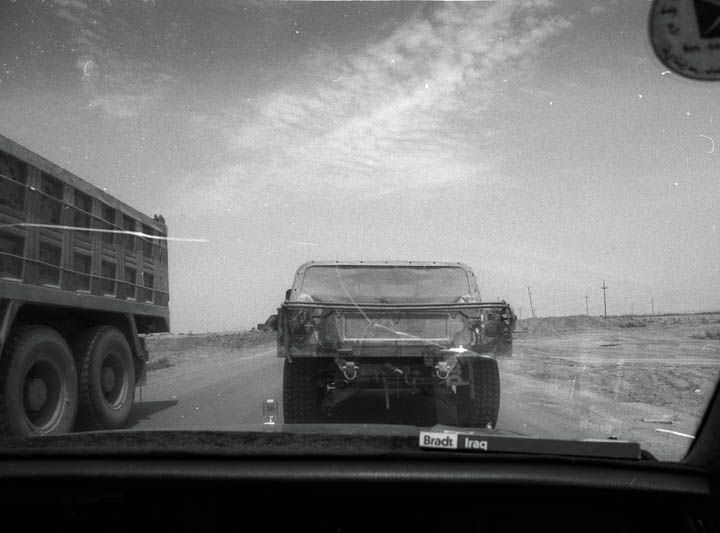 On the road outside Nasiriyah following an American Humvee, May 2003. The gulf in understanding between Iraqis and their newly arrived American interlopers was visibly evident in the differences in driving styles and bizarre hand gestures made toward locals by the U.S. soldiers. From the very beginning, the Office of Special Plans ambitious Iraq project appeared doomed, at least in my personal observations. ©2003 Derek Henry Flood

New York- I have a new article out on how the ongoing war in Syria is helping stoke sectarian tensions in Iraq that are manifesting themselves in the form of daily suicide bombings, shootings, and dual massive AQ jailbreaks. My article examines how the unrelenting carnage in Syria has not only taken the place of Iraq in the global media spotlight, but is also directly fueling renewed conflict in Iraq itself. The Islamic State of Iraq (ISI), sometimes referred to as al-Qaeda in Iraq (AQI) has now added “ash-Sham” (“the Levant”-i.e. Syria and perhaps they’re including Lebanon as well). So the ISI is now the ISIS. Sunni Salafism has only expanded in Syria as the fractious umbrella of the Free Syrian Army is simply a much less efficient fighting force than their jihadi counterparts. 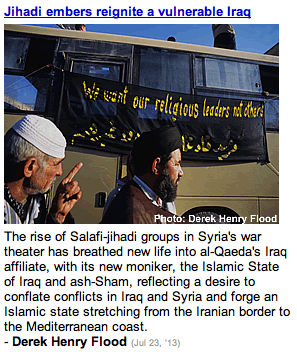 At the same time, Hezbollah from Lebanon and Shia groups from Iraq are officially sending in fighters to both the front line in places like al-Qusayr and to protect Shia holy places like the shrine of Sayyida Zaynab on the outskirts of Damascus and When the Sayyida Zainab site is perceived as threatened, it makes for a an easily rallying call for Shia on either side of Syria to mobilize to protect and defend not only the religious pilgrimage site, but also the Assad regime that controls the territory such a site rests on.

Both Salafi-jihadis and more Qom-oriented activist Shia have been working to unite Syria and Iraq as a single battleground. Though there are important schisms within the Shia perspective such as Najaf vs. Qom and creating a Sunni Islamic state within borders of a finite post-colonial nation-state vs. an idealized borderless caliphate, it cannot be denied or played down that the wars in Syria and Iraq are now inextricably linked. And Lebanon has been drawn in in full view in terms of sub-state or non-state groups protecting what the believe are their interests in Syria.

This is not at all to suggest there aren’t very local contexts underlying the individual decisions of specific militant movements on when to act and how to pursue their goals. Within the two respective wars there has been for some time been speculation about whether the more dominant phenomena is competition between groups or cooperation between them based on clearly drawn ideological lines. But when one goes to the trouble (or risk) of taking an on the ground look, the old adage tends to ring true that the situations are neither black nor white. 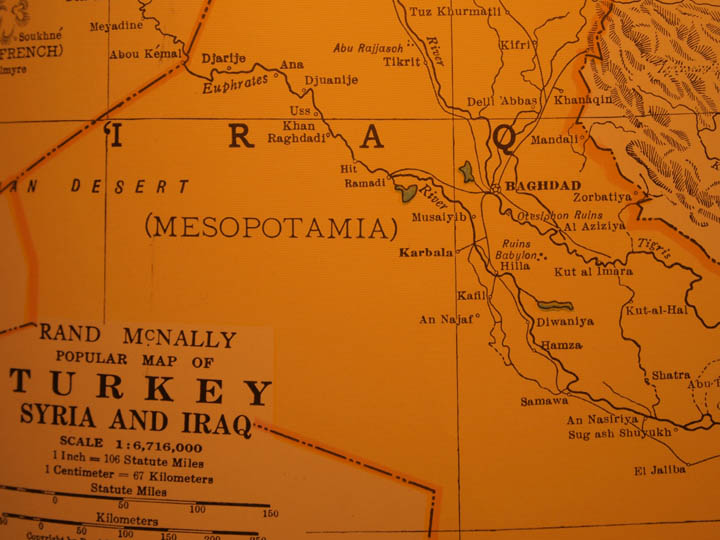 Many Western analysts believe in taking stands based on what stands for empirical data in what are quite confusing battle fronts in reality and then sticking by said positions, perhaps engaging in a passive-agressive tête-à-tête via social media rather than admit they made need to adjust their stance in the face of a new ground reality. Iraq and Syria are deeply complex places plagued by schism upon schism whether in the realms of theology or politics. These dynamics are fluid and will remain so with even the most nimble global shuttle diplomat having neither the knowledge nor the resources to quell them. The United States may have pulled nearly all of its troops out of Iraq in December 2011 but the war is far from over. 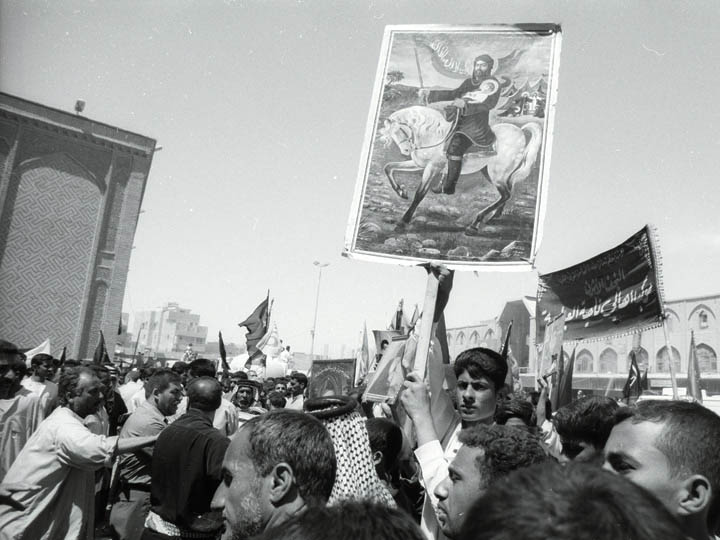 Outside the shrine of Imam Ali in Najaf, a young Shia hoists a poster of Imam Hussein cradling his infant son on a white horse during the battle of Karbala in 680 A.D. ©2003 Derek Henry Flood 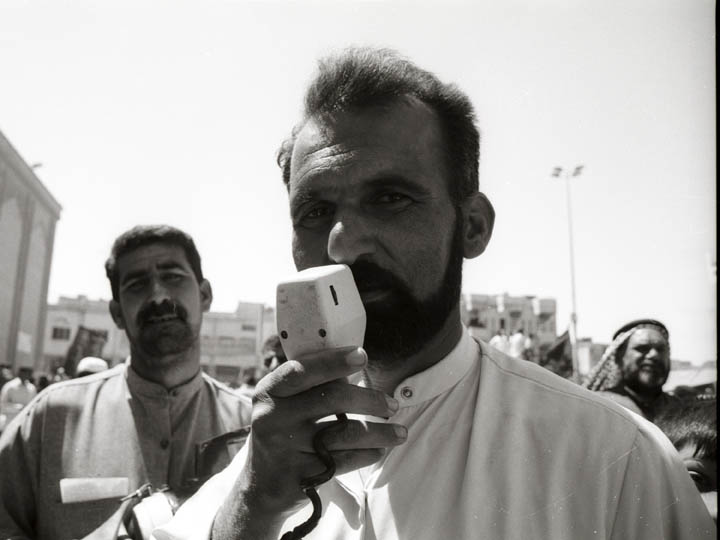 Groups from all over Iraq (and Iran) came to celebrate Mawlid un-Nabi (the Prophet’s birthday). Each one seemed to have a megaphone rocking chant leader urging his followers to pious elation. ©2003 Derek Henry Flood 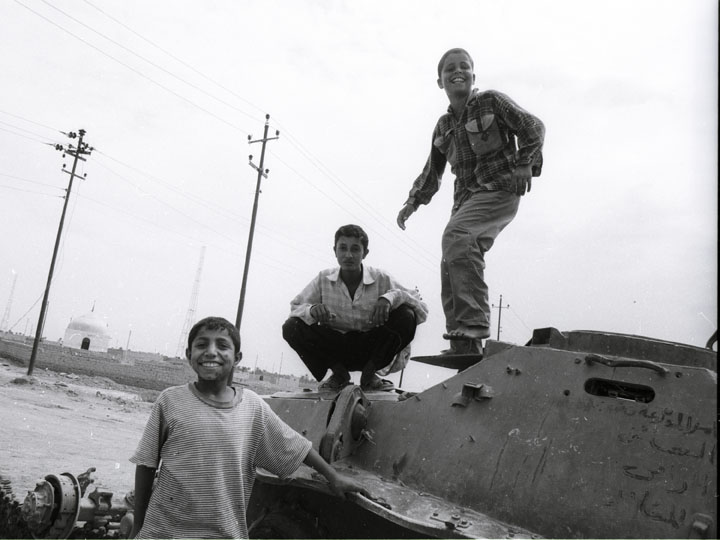 iraqi boys play atop a destroyed Soviet BTR armored personnel carrier on the road between Nasiriyah and Najaf. I sometimes reflect back and wonder what became of the people I photographed a decade ago. I fear to think what may have happened to some of them. ©2003 Derek Henry Flood

← Niger, Mali, and the Confluence of Salafisms in North and West Africa
Twenty Long Years →