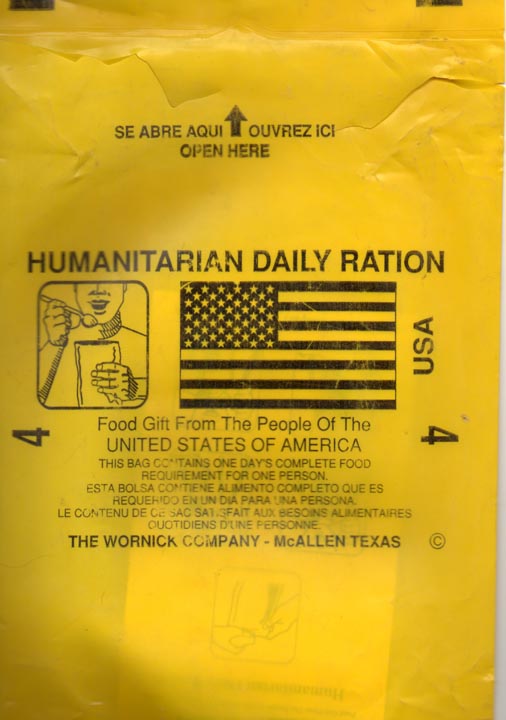 MRE marked as a humanitarian daily ration. Packed by illegal migrants in Texas for Tajiks and Uzbeks in Afghanistan, eaten by Western journos and other war tourists. Just another of my war souvenirs.

New York- I’ve been rummaging through my archives from the terror wars era for the last week or two while working on an upcoming project on Syria and have opened a veritable Pandora’s Box in the process. The other day I found a couple of MREs (Meals Ready to Eat) from the very beginning of the American-led intervention in the ongoing Afghan civil war in November 2001. These hideously bright yellow packets were being sold by traders in the smuggler’s bazaar of Khawja Bahauddin, the ramshackle town near the border with Tajikistan where Ahmad Shah Massoud had been assassinated on September 9, 2001. These preservative laden bags of glorified junk food were air dropped over ‘friendly’ (i.e. areas controlled by cash-for-allegiance warlords) parts of northern Afghanistan in what was much more a bungled PR campaign than an effective humanitarian effort.

Rural Afghans were puzzled by the squirt packs of peanut butter and stale pop tarts entirely alien to their diet. To put things in the effete terminology used by food nerds today, Afghanistan is a “farm-to-table” society where all food is de facto “organic” even though the whole country is devoid of a Whole Foods.

These plastic bags were carefully labeled in English, French, and Spanish for illiterate villagers that speak Dari, Uzbek, and Pashto, might as well have been artifacts from the Roswell crash. I wouldn’t be at all surprised to find that more Western journos and CIA types ended up eating these awful things than the Afghans themselves. They were manufactured by a military contractor eager to reap the early buildup of the immediate post-9/11 spending boomlet called The Wornick Company.

The Wornick Company apparently employed undocumented Mexican immigrants to pack these things. An investigation was launched after it was discovered an AQ operative had his sights set on the company’s HQ in south Texas after Wornick ingeniously labeled these packets with their company name and address. Like an AQ for dummies target.

A better holistic strategy would have been to contract an nearby Iranian company (who could have perhaps given honest work to Iran’s own resented Afghan refugees) to package pulao and freeze dried naan, you know, like, food Afghans actually eat not dissimilar to Iranian fare. Laughable as it sounds, something akin to this might have killed two birds with one stone-actually nourishing starving Afghans and engaging Iran economically.

Such a practical initiative could have opened the door to undermining both the clerical regime in Qom and Tehran during Mohammed Khatami’s “Dialogue of Civilizations” era and the still-not-going-away bomb Iran chicken hawks poisoning the present debate  in DC. But the anti-Iran agitators active in Washington today are often one in the same as the men and women who wanted to pull away from Afghanistan in 2002 (and therefore an Iran that was cooperating at the time) to focus Pentagon efforts on Iraq thereby keeping the US pitted against Iran for the foreseeable future. The maintenance of this highly negative staus quo was far  more important for those with a vested interest in keeping hostilities alive and well.

The air dropping of quintessential American foodstuffs into Afghanistan was an ill conceived plan at best and a poor use of tax payer funds. With no follow up measures to coordinate events on the ground, there was no methodology employed to ensure that the food was received by those that needed it most. Meanwhile, the few who happened upon these poorly planned c-17 borne drops would often hoard them and sell them to bazaaris who would then resell them to the strangers in their midst. There was no way to ensure appropriate and even distribution, the thing bona fide unarmed humanitarian NGOs are supposed to be most adept at.

Oh and another story going around at the time was that these clumsy airborne food drops had actually managed to kill a few unsuspecting villagers along the way. I never got to the bottom of weather that was actually true or not because to be honest I was too busy covering the war. But I was never all that comfortable with the idea of armed humanitarians. “Armed humanitarian” is a stark contradiction in terms.

The pacifist European NGOs were careening around with large decals on the side of their Landcruisers showing Kalashnikovs encircled in red with a line crossing them out while the Americans were landing armed helicopters, disgorging bulky helmeted men in camouflage, guns drawn, in the exact same political space. It all seemed like such a bad juxtaposition. 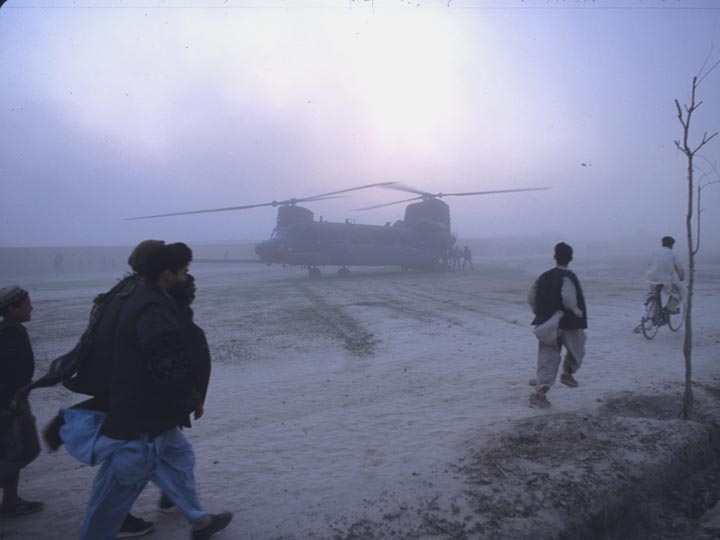 I photographed what was then a very rare daylight landing of American troops in northern Afghanistan. Until this point, the only visual evidence of American action in Afghanistan were sightings of warplanes like the C-130 aircraft high in the sky unloading 15,000 lb BLU-82 ‘daisy cutter’ fuel bombs near Taliban trenches in Dasht-i-Qala and other assorted aircraft painting their voluminous vapor trails across the clear sky. @2001 Derek Henry Flood

For background on the use and origins of the “daisy cutter’ bomb, see here  and here (brief) and here (extensive). 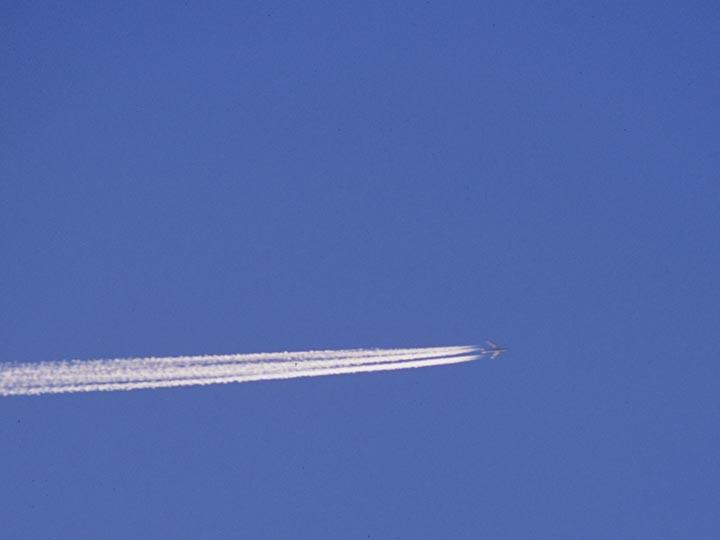 A B52 Stratofortress strategic bomber makes an early morning run from Diego Garcia in the Indian Ocean toward the frontline between Jamiat forces and Taliban trenches. Soaring over the front line town of Dasht-i-Qala on a cloudless November morning, the B52’s contrails acted as ominous skywriting. Having come from a-just-after-9/11 New York, it gave me a weird feeling to hear the deep subsonic roar of these massive, weaponized planes overhead-especially when realizing you are in a place that has no ordinary air traffic after decades of international isolation. They would wake me from my slumber in the basement of a warlord’s guesthouse where I was holed up. ©2001 Derek Henry Flood

For more on the B52 component and other facets of the initial air campaign in Afghanistan, see here and here (brief) and here (extensive). 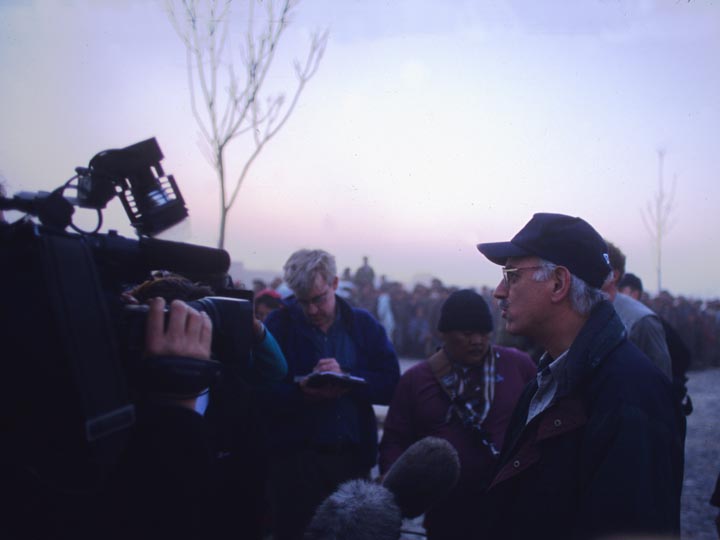 Enter the armed humanitarians. Andrew Natsios, then chief of USAID, staged a dramatic daylight landing in a duo of Chinook helicopters in Khwaja Bahauddin, Takhar Province, Afghanistan, November 2001. The local villagers and attendant refugees didn’t seem to know what to make of the latest interlopers with an agenda in their country. ©2001 Derek Henry Flood 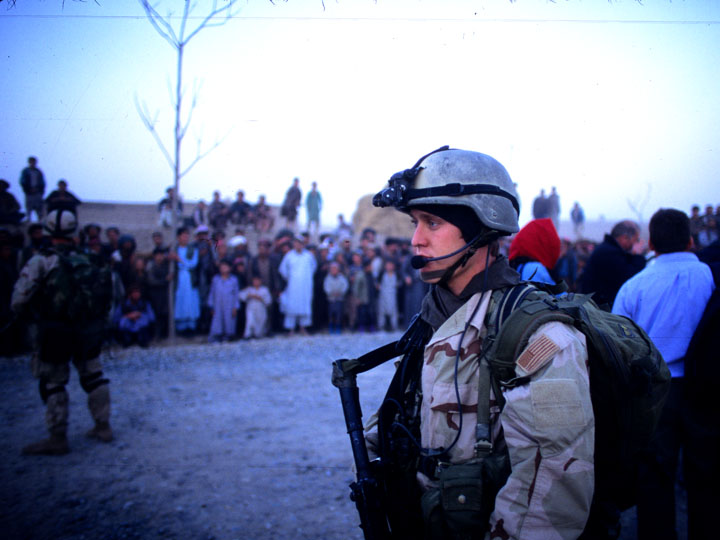 An American soldier accompanying Natsios into the fray of dust and intensely curious Afghan men and boys looks exhausted and dazed. The American landing party seemed to have coordinated their daylight landing with members of Jamiat-i-Islami who arrived with antiquated rifles to keep the crowd at bay along with a French NGO called ACTED that was active in the area. ©2001 Derek Henry Flood 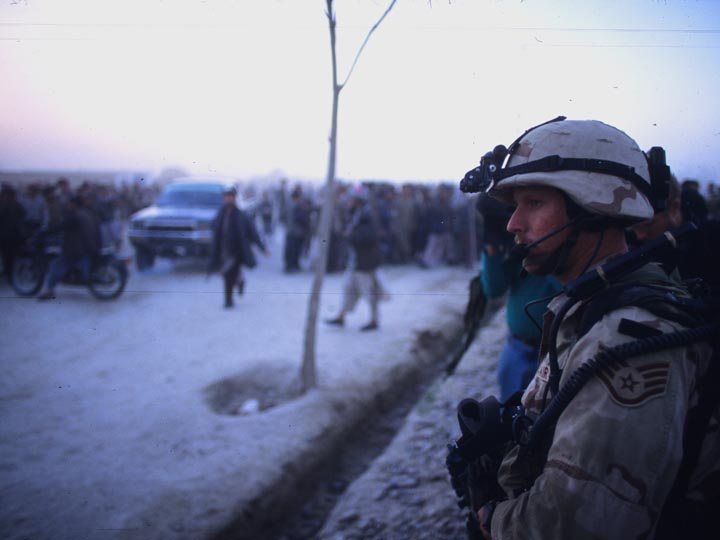 An American soldier at the edge of the perimeter as Nastios gives an unannounced press conference to the journos who were still in Khawja Bahauddin that day. After word of the fall of Mazar-i-Sharif spread like wildfire, most people had moved further west to cover what would become the battle of Qala-i-Jangi. I think I was nearly as taken aback as the locals. Until this moment, the American ground presence in Afghanistan was strictly clandestine as far as I knew at the time, obscured in the dark of night. ©2001 Derek Henry Flood 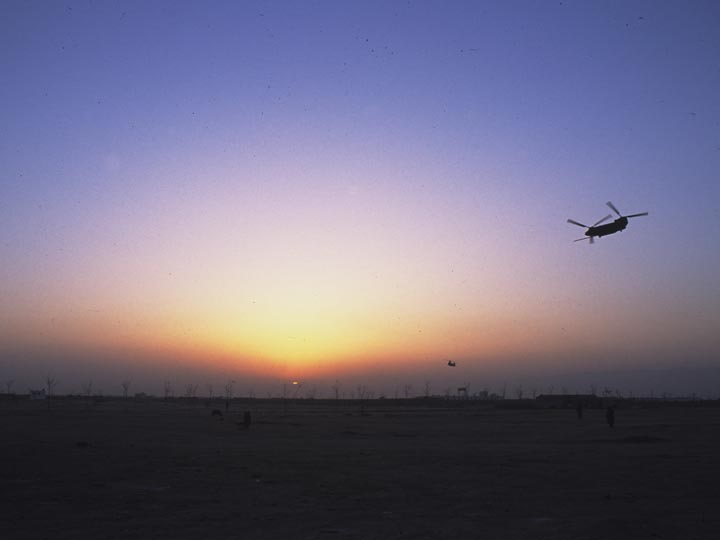 As quickly as they came, they left. The USAID chief was spirited away by his solider-guards off into the sunset to what I presumed was back to Uzbekistan. America was playing good cop, bad cop. Dropping bombs on those Afghans it deemed worthy of death and portraying the US government and contractors like Wornick as an aid organization writ large. What were average Afghans to make of all this confused messaging? ©2001 Derek Henry Flood