While Baghdad is keen to visibly display its control over Kirkuk governorate following the liberation of Hawija coupled with the ouster of the peshmerga in October 2017, the city has seen an increase in militant incidents since the upending of the security status quo that preceded the return of central authority. This trend is not likely to be stalled nor reversed in the near term. ©2018 Derek Henry Flood

Kirkuk- I have a featured report in London at Jane’s Terrorism and Insurgency Centre (subscription required) this week about ad-Dawla al-Islamiyya’s (IS’s) return to almost purely asymmetric tactics after the forcible collapse of its all too modern, social media-fueled state-building project in Iraq and Syria. To put it mildly, things in southern swaths of Kirkuk governorate are bad, really bad. As are conditions in northern Salah ad-Din governorate and much of federally controlled (as opposed to PUK controlled areas) Diyala. This is not to mention situations in al-Anbar and Ninewa. It is not so much that these places are deteriorating from relatively secure to insecure but that their security at the village level was never entirely consolidated even after PM al-Abadi declared the republic entirely liberated last December. 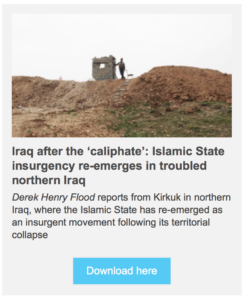 The al-Abadi government made great strides–depending on one’s personal outlook–in restoring much of Iraq’s incredibly frayed territorial integrity. First from armed practitioners of al-salafiyya al-jihadiyya in a grinding, year-plus long offensive that largely centred upon the taking of Mosul. Before this massive operation was even completed, signified by the capture of al-Qaim and Rawa towns  in al-Anbar, Iraqi security forces and Shia militias-cum-paramilitaries known in Iraq parlance as Hashd al-Shaabi launched a swift operation to retake Kirkuk city and much of the surrounding disputed territories from KDP and PUK peshmerga. The Kurds were immediately routed in a mix of leadership betrayal and massive lack of force and armour parity.

Iraqi Kurds often refer to this as the ’16 October crisis’ whereby through dealmaking between the late Iraqi president Jalal Talabani’s widow and one of his sons with Iran, the PUK forces withdrew from what president Talabani had called the “Kurdish Jerusalem” in a 2011 speech. Now in 2018, there exists an ungoverned space between ISF and Hashd-held territory and KDP and PUK-held lands where IS has been exploiting this gap to launch attacks on security forces, killing tribal leaders and their families they deem collaborators, and slaughtering uncooperative civilians.

Some have termed these developments as a return of IS though a more accurate depiction is that the IS presence was never entirely eradicated. After the disastrous liberation of Mosul in which scores of civilians were killed, when Tal Afar and Hawija and several other smaller towns were encircled by advancing ISF and Hashd forces, deals were made where militants fled via an uncontrolled corridor. This then indicates that those who were not later captured would live to regroup and fight another day. We are now living in that proverbial other day.