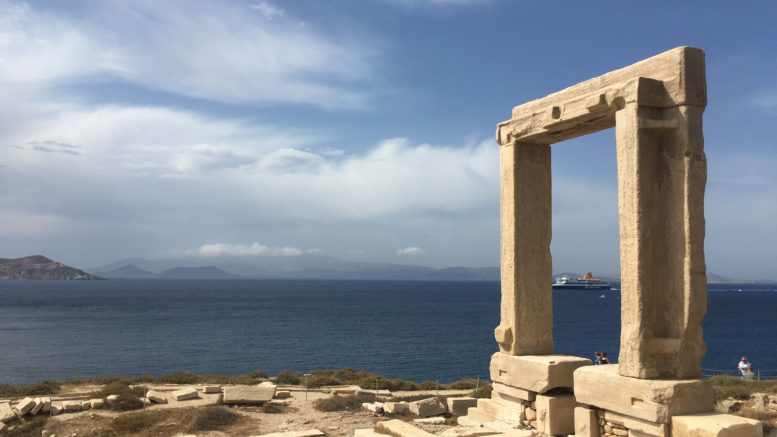 Doorway to heaven. The lintel gate to the unfinished temple of Apollo on an islet in Naxos harbour. ©2019 Derek Henry Flood

Naxos- I’ve just spent the last ten days on an island in the heart of the Cyclades that for decades I’d either passed by or stopped briefly to change ferries. I hadn’t intended on visiting this splendid place at all but a bus and ferry strike called by angry Athenian unions coupled with a bargain last minute flight brought me here. I had planned on returning to Paros and Antiparos but Naxos was exactly what I was looking for. It has history, quietude, and unbridled sunshine with occasional aeolian gusts.

Naxos’ trademark visual feature is the massive marble portara (portal). intended for a temple of Apollo that was never completed on an islet in its azure harbour. It juts up from the earth as if a gate to the ancient beyond. That the temple itself was never fully realised by Lygdamis, the island’s ancient oligarchic tyrant makes it all the more intriguing. Meant to be a massive Ionian-style monument of god-like proportions, Lygdamis purportedly fell from power by way of the Spartans in the early phase of construction before his gargantuan stone ode to Apollo could be finished. Thus the megalomania was relatively short-lived but has nevertheless stood the test of time for some 2500 years.

The island is comparatively large and docile in the off season. Quiet enough to have some genuine Ellinika (Modern Greek language) interactions at the supermarket or the bakery, of what little I’ve retained over the years. Most of my days were spent brushing up my CV in anticipation of the coming year and lazing on an utterly silent cove beach with middle class German families windsurfing on one end, tourists plodding on horseback on the other, and the desolate middle all to myself where I read a yellowed paperback edition of the now very politically incorrect, yet totally entertaining Balkan Ghosts under the late afternoon Aegean sun. As I’ve been known to say about early Seinfeld episodes, you couldn’t create that work in today’s hypersensitive millennial polity.

Greece is many things. It is southern Europe to some, the Balkan peninsula to others, a satellite member of the EU yet from where the word Europe originates (remember the ‘Grexit’ hysteria some years back where Greece was going to exit the eurozone?). Greece is a Mediterranean nation, a NATO member, but judging by music, cuisine, climate, and animated body language, modern Greece feels firmly placed in the Orient rather than an accidental geographic exclave of the West. To the Arabs it is Yunan, to the Turks, Yunanistan, and officially the Hellenic Republic.

From the names of the philosophers we heard about in grade school to the twentieth-century military juntas few in the West know anything about, Greece confounds. It excites. It is eternal.

Greek antiquity fires the imagination while the present day, stultifying politics of post-modern Greece lead one down the path to cynicism. A cauldron of ideas and history, Greece is all of these things at once. Its simultaneity of chaos and classicism is what makes the place appealing to me.

Naxians are generally a relaxed lot, save for when they’re zipping around the island’s mostly sidewalk-less roads. I barely had a single unpleasant interaction. I will assuredly return. I first set foot in the Cyclades in July 1998 as a young university student enthralled with the ancient world and pre-internet global backpacker culture. One day back then, I said to myself on Ios’ Mylopotas beach that I would return to this desert-like island group for the rest of my days. So far this has held true.