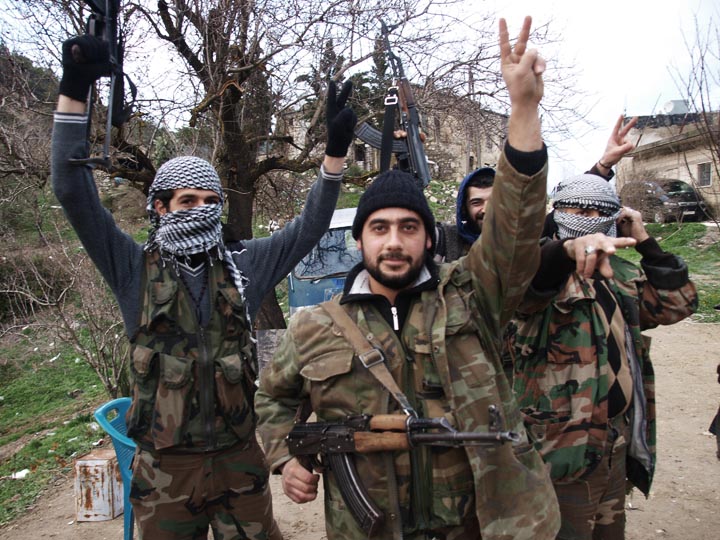 Syrian fighters in Idlib mimicking the hand gesture of Libyan revolutionaries who had overthrown Qaddafi the previous year with the help of Western air power. ©2012 Derek Henry Flood

New York- Three years ago today I trekked into northern Syria’s rebellious Idlib Governorate from Hatay Province in Turkey. I had to put immense trust in my fixer who was living in a Turkish Red Crescent camp at the time with his family after having fled the town of Binnish where he’d been a school teacher in peacetime. When I asked how many other journos he’d taken where we were headed, he said just one, the legendary Times correspondent Anthony Loyd. When I badgered about who else, he’d said Peter Bouckaert, Human Rights Watch’s emergencies director. Not bad company, I thought to myself.

These dudes were famous and if they trusted M_____d than I thought I could too. As with any of these situations though, there’s just an element of risk that cannot be subtracted. Besides the obvious dangers (and this was before Syria had become a beheading ground for the most unfortunate outsiders), there was the sheer physicality of it all. The mountain, the rain, the snow, the razor wire, the fear, the paranoia. Why was this worth doing? I was following a chain of events since early 2011 in which stultified regimes in the world’s most politically stagnant Arab-ruled states.

The so-called ‘Arab Spring’ involved far more than the ‘Arab Street’ of the early 2000s. Libya had its Tubu, Tuareg and Amazigh (Berbers), Syria had its Kurds and so forth. None of these places were ethnically homogenous. Plus there were the fleeing guest workers from Bangladesh and other forlorn states that had grown dependent on a remission economy as they bled out economic migrants. It was a broad movement that caught fire with local characteristics. Social media met kalashnikovs at  dizzying rate. There were notable exceptions of course, like Algeria where it was posited that the populace had tired of the bloody war from the 1990s thus not having the stomach for a prolonged clash with the Bouteflika regime.

Returning to the Syrian border in October 2014, I wouldn’t have dared to cross it. The country had transformed from a place that welcomed foreign journalists when it was once the least covered uprising to the most feared place to work in the world. Even little Bahrain was a more fashionable topic when Syria kicked off nearly four years ago. The uprising began the day I returned to Alexandria from Benghazi on March 15, 2011 and I recall it as a minor news item. By the time I reached Syria three years ago after much of my own work in 2011 was focused on Libya, the media was still referring to the war there as a ‘crackdown.’

At the risk of sounding ultimately naive, there seemed to be an innocence about the rebel fighters I met. They welcomed me with the hospitality I remembered upon first traveling the region as a backpacker in the late 1990s. They sought to overthrow the Assad dictatorship. Yes, they were Sunni men from the countryside but they didn’t frame their struggle as a religious one when I spoke with them. I feared it might turn into a sectarian conflict with the history of the scorched earth suppression of the Ikhwan in the late 1970s, culminating with the destruction of Hama in 1982. Just as the Abu Salim prison massacre in 1996 had helped propel the Libyan war, Syria’s past would eventually come back to haunt it.

Syria’s war in 2015 is an intractable, fissiparous mess. It needn’t have been. But after decades of one man, one party style rule, even if the FSA rebels had coalesced under a properly hierarchical leadership, the country may have just morphed into a different version of chaos. We will never now. When the rebel commander asked me why the West wasn’t eager to assist his men as they had so willingly in Libya (as it appeared from a Syrian perspective), I made a cynical retort: “Look at the map. Libya borders places like Niger and Chad to its south that no one in the West gives a damn about save for energy interests. Your country borders Israel to its south (west). This makes assisting your people in an armed humanitarian intervention infinitely more complicated.” 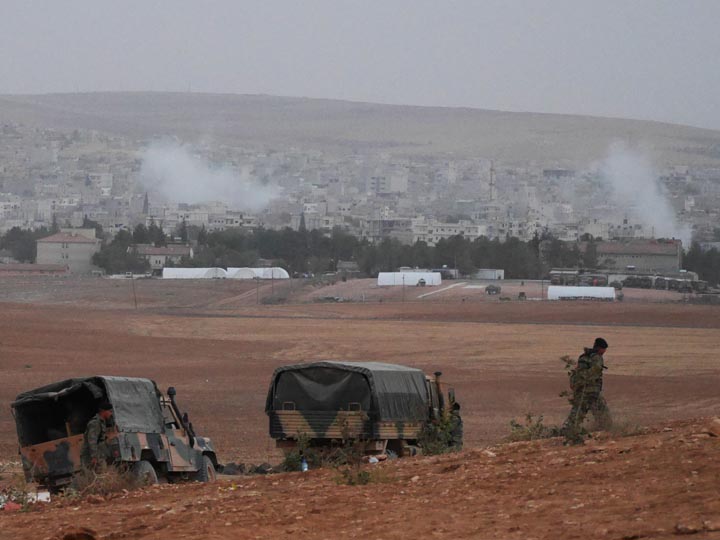 This juxtaposition of Turkish soldiers nonchalantly watching the siege of Kobane speaks volumes about how the Syrian war was allowed to metastisize. The worst elements of global salafi-jihad were a given free reign whether by accident or intention. ©2014 Derek Henry Flood

← The Quiescence of Oman
Looking Back at Lebanon →