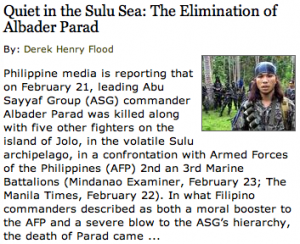 New York- The new issue of Militant Leadership Monitor is online over at the Jamestown site. In our 2nd issue, I have another article on a recently killed Abu Sayyaf leader named Albader Parad who was recently taken down in a firefight in Jolo with Philippine marines. The death of Parad may yield the eventual decline of the ASG and could be significant to the future of U.S. involvement in the southern Philippines.

Other articles in this issue include:

• A profile of AQIM leader Abedelmalek Droukdel by Camille Tawil