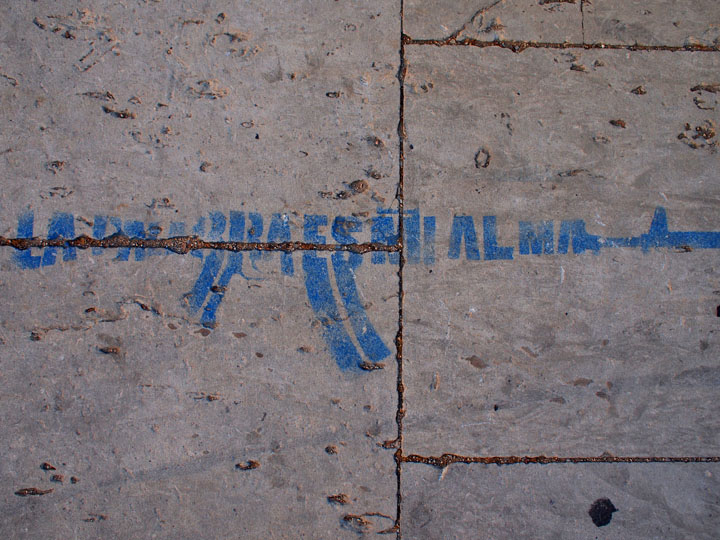 Stencil graffiti on white marble ground here in Barcelona. I can’t quite tell what it’s supposed to read but my guess is something or other political. Another example of how a Soviet weapon devised in the wake of World War II has continued to transcend its intended purpose–to fight wars to defend/expand Soviet power in the 20th century–to be a sign of social transformation, avant garde art, or national liberation. ©2012 Derek Henry Flood

Barcelona- The above title is a line from the remix of M.I.A.’s Paper Planes single with Bun B and Rich Boy. It kind of capture’s my day today in a way. Sitting in the First World which seems at points in danger of slipping in the Second and writing and wondering about the volatile politics of the Third in Mali that verges on Barcelona’s own Manuel Castells‘ Fourth World in the north. I know Alfred Sauvy’s Third World is supposed to be long out of fashion in the post-poltical correctness era of the Global North and South or Majority World not to mentions the BRICS but maybe that’s why I continue to use it. Sometimes I simply like a passé expression out of sheer sentimentality. Other times it’s just a more evocative term than something bland-sounding coined by a present-day economist, demographer or sociologist.

I have a new article out from my trip to Sévaré the other week in today’s Christian Science Monitor. Despite a nuisance of a government minder, a confrontation with a fearsome man from the security forces and close to 100º F temperatures, I’m somehow managing to get some work out into the internet-o-sphere this week. The eurozone is in what seems like constant crisis and Spain here is chief among the economic enfants terribles. Well after Greece that is…

Nonetheless summer is here and things are plodding along. Unemployment is at record levels but at least there’s a beach. And at least the perennial post-Franco nationalism and separatism here in Catalunya is confined to flags, football, and mostly civil politics unlike dear Mali from where I’ve come in recent weeks.

The cliché goes that Mali was West Africa’s [lone?] success story under ATT in terms of democracy, good [or decent?] governance, corruption, and rule of law. Some Malians I spoke with over the weeks there strongly disagreed with all or parts of that characterization when describing day-to-day life under the “Soldier of Democracy” ATT’s rule but dissatisfaction was setting in even amongst some in the pro-coup camp as the weeks turned to months and the politics went from roller coaster to quagmire.

There was a report today in a Bamako paper (Français) that Malian forces began an assault on Monday on a very northerly garrison called Taoudéni not far from the Algerian and Mauritanian borders. The logistics for such an operation would seem impossible without the direct military assistance of either Algiers or Nouakchott.  But one report in one local paper doesn’t necessary cut it. If there was renewed war in Mali, I’d think others would be breaking the story. Could just be a bit of regurgitated propaganda from Kati. We’ll see if anything else filters through in the coming days. 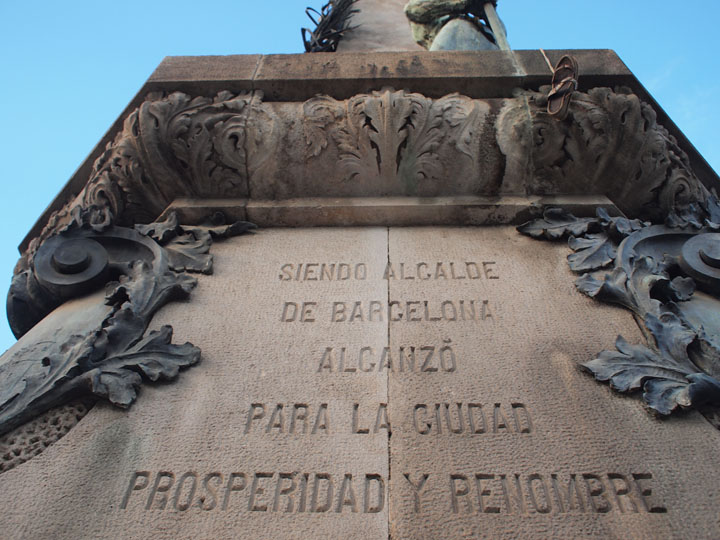 Farewell- Yesterday I awoke to tragic news in my inbox. My editor at Asia Times Online, Anthony ‘Tony’ Allison, died of complications from a heart ailment in Hua Hin on the Gulf of Thailand. He was 59. I immediately wrote an email expressing my condolences and proceeded to mostly put it out of my head for the rest of the day. I was busy finishing up some edits on the CSM article featured in the box above and alternately worked on a piece for Jane’s Islamic Affairs Analyst stemming from my trip to Mali. I then busied myself with petty tasks like doing laundry and went skateboarding at my favorite neighborhood spot at the entrance to the Barcelona zoo at the end of an incredibly hot day.

But today, in reading his obituary and tributes from us hacks, the news is really sinking in. Life is entirely unpredictable. When I saw Tim Hetherington standing outside the entrance of the hospital in Ajdabiya, Libya last year, I could never have guessed that just a few weeks later a guy of his stature in our industry would be killed. It’s partly a product of getting older I suppose. The longer you live, the more likely it is people you know (or have been in the presence of) will die. I have this idea about when I was in my 20’s, nothing in life seemed to change that dramatically. You could not talk to a friend on the opposite side of the country or the world for six months or even a year and the odds were their life had changed little in that interim. In the 30’s, all that went to pot. Unromantic, dull-sounding terms came into play like “marriage track relationships.”

Friends who were in these forced-sounding social constructs suddenly seem to drop off the face of the earth. People began to say predictable things with increasing consistency about buying houses and cars, sonograms and painting nurseries. New friendships then grew out of the commonality of those who eschewed such societal norms (ie those who were still out at the bars on Tuesday nights at 2am). No amount of pseudo-security or inherited wealth of one form or another can prevent the inevitable. We all eventually end up in the same place. It’s what we do until then that matters. No one I’ve known or met who died in the decade of the 9/11 wars ever thought as they were packing their bags, “OK, this is my final trip.” The first guys I knew who died in my field died in 2002. That was a decade ago. And somehow I am fortunate enough to look out at the brilliant blue skies over northeastern Spain 10 years on with what seem like endless possibilities still laying ahead. 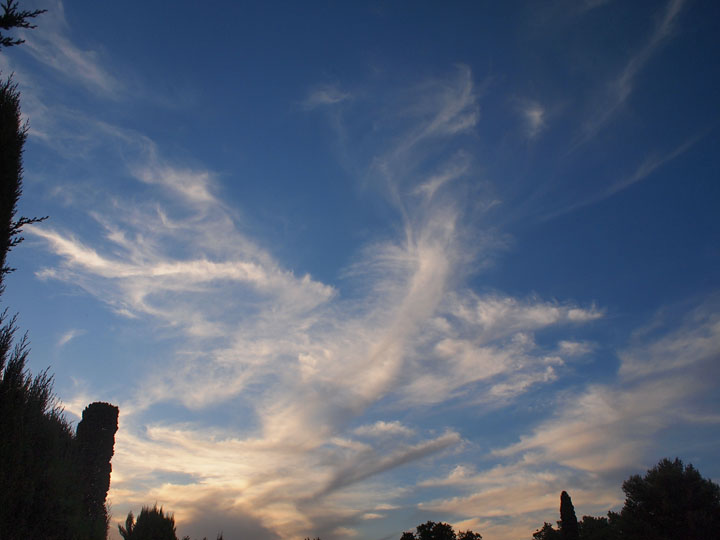